“We will become gods” ~ Yuval Noah Harari … “You will not surely die. For God knows that when you eat of it your eyes will be opened, and you will be like God” ~ Satan (Gen.3:4-5) 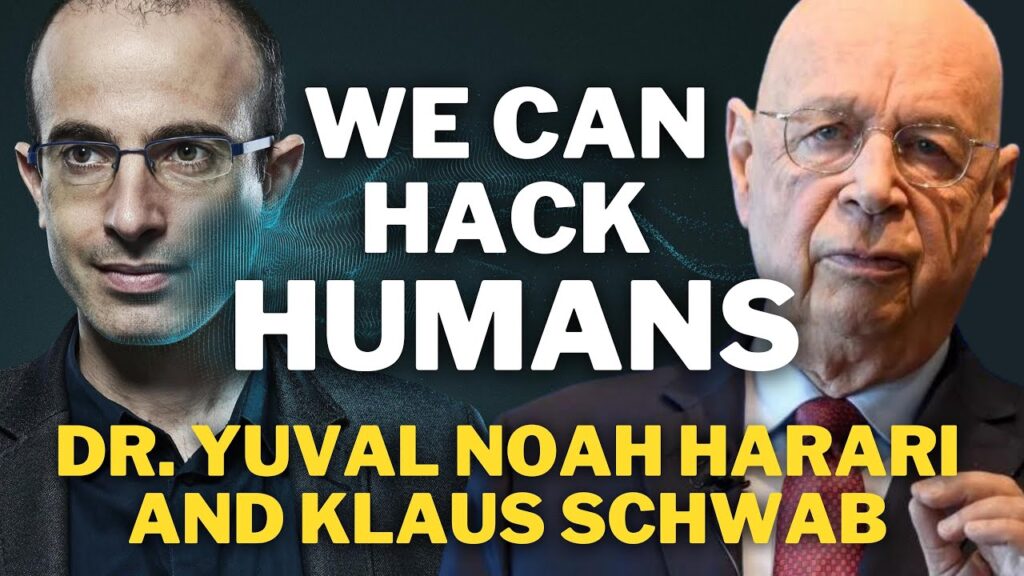 Yuval Noah Harari, lead advisor to Klaus Schwab….Strongly deceived and carries the spirit of ANTI-Christ around with him. Lover of self and thinking that he can alter God’s creation of mankind by merging humans with AI to make God’s image bearers “better”. Anyone who thinks God’s creation needs to be altered or “corrected” will not fare well when they stand face to face with him at the appointed time unless they change their way of thinking (repent). You can see how easily pushing Antichrist will be in the 7 year Tribulation (Time of Jacob’s/Israel’s Trouble).

Lovers of self will wholeheartedly get on broad with these planned changes and take the Mark that will alter your humanness to the point of no longer being able to be covered by the blood of Jesus. This is why they push the agenda and lies.

1 John 4:1-6
{Test the Spirits}
Beloved, do not believe every spirit, but test the spirits to see whether they are from God, for many false prophets have gone out into the world. By this you know the Spirit of God: every spirit that confesses that Jesus Christ has come in the flesh is from God, and every spirit that does not confess Jesus is not from God. This is the spirit of the antichrist, which you heard was coming and now is in the world already.

Article:  Yuval Noah Harari | Yuval States, “Jesus Rising from the Dead and Being the Son of God is FAKE NEWS”

Is Klaus Schwab the Most Dangerous Man in the World?

JP is a humorist but between the chuckles he is telling the full truth here. Listen to the clips of Schawb. Remember, during the Tribulation the Antichrist will require you to take a mark in/on your right hand or forehead and after you receive this mark you can no longer be saved. It changes your genetic make up to the point that Jesus’ blood can no longer save you. The person’s blood will have been mingled with a DNA that is not human so the person will no longer be fully human.

I believe the main reason why fallen angels can not repent of what they did and be saved is because they are another type of flesh. The scriptures tell us that salvation through the blood of Jesus of something that angels long to understand fully and look into because it is something mysterious to them.

1 Peter 1:10-12
Concerning this salvation, the prophets who prophesied about the grace that was to be yours searched and inquired carefully, inquiring what person or time the Spirit of Christ in them was indicating when he predicted the sufferings of Christ and the subsequent glories. It was revealed to them that they were serving not themselves but you, in the things that have now been announced to you through those who preached the good news to you by the Holy Spirit sent from heaven, things into which angels long to look.

They do know however, that salvation can only be accomplished if you are fully human so, the fallen formed a battle plan to thwart what God ordained and to rip off God and to repay him for the judgment when they mated with humans to create their nephilim children. There is more going on in the spiritual realm that ties to our physical that people do not even realize. We are living behind enemy lines until Jesus returns.

Any way, we are told this:

Titus 3:4-6
…when the goodness and loving kindness of God our Savior appeared, he saved us, not because of works done by us in righteousness, but according to his own mercy, ***by the washing of regeneration and renewal of the Holy Spirit***, whom he poured out on us richly through Jesus Christ our Savior…

You can not have this kind of REGENERATION unless you are fully human.

Snip below from Dr. Mercola’s excellent article via his news letter I get daily. They are only free for a short time but here is the link in case you get to read it in time: World Economic Forum Was Created by US Policies or try world-economic-forum-created-by-us-policies-pdf to the PDF I downloaded to see if that works.

Committed to Reengineering Life Itself

“By hacking organisms,” Harari said, “elites may gain the power to re-engineer the future of life itself. Because once you can hack something, you can usually also engineer it.”5 Soon, he says, some corporations and governments will be able to “systematically hack all the people.” And if they succeed in hacking life, he describes it as the “greatest revolution in biology since the beginning of life 4 billion years ago.” According to Harari:6

Once human life is hacked, the hackers will maintain control over life itself — a process that has been accelerated by the pandemic. After all, Harari said, “It’s often said that you should never let a good crisis go to waste.”7

Surveillance is a key part of the plan for global totalitarian control, and Harari says that in 100 years, people will be able to look back and identify the COVID-19 pandemic as the moment when a new regime in surveillance took over — “especially surveillance under the skin.”8

As you can see, they are working tirelessly towards all the goals of the New World Order Beast System that the Antichrist will reign over. They don’t even hide it any longer because they know they are so close to its beginning. If they know it is at hand then how much more should we know that Jesus is at the door and about to rapture his church out of here before the 7 year Tribulation or, Time of Jacob’s / Israel’s Trouble begins? Be looking up!! It truly is any day now! If you are not saved then……TODAY is the BEST day for your salvation!!! Ask Jesus to save you TODAY!!!

Why I am not a Jehovah's Witness or Mormon
Scott Clarke At 2017 Hear The Watchmen Conference {Revelation 12, September 23 &...
It's Friday But Sunday's Coming...Third Day Wedding???
False Prophet Makes A New Encyclical. Shocker, It Pushes Global Government