Watching The Newest Events In These Last Days (The Syria Strikes) 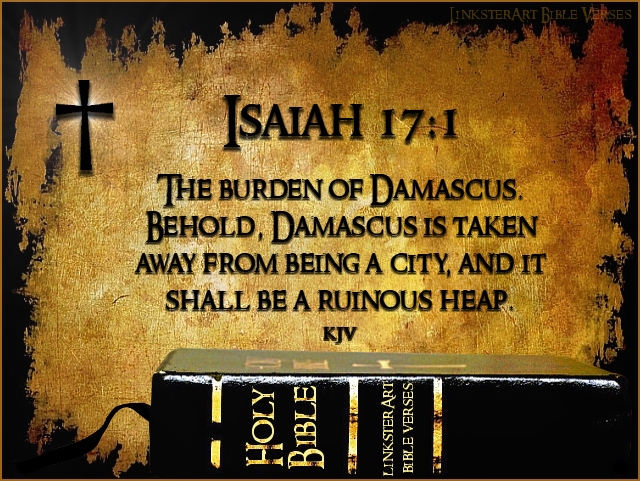 I wanted to wait and see how the recent strikes in Syria via the US would unfold in the days to come before making a post but, I decided to post this quick one with a great short video in the interim. I can tell you that I am watching and waiting to see if this leads into the other end times events that lead to the 7 year Tribulation. It is hard to tell right off until we wait longer and see what unfolds however, those of us who watch are mostly on the same page in thinking this could be a big deal. Partly because of the timing of it all. A friend of mine nut-shelled this key information below. She said:

“As I watched the news reports last night, and the volume of commentary following, one of the speakers made this correlation: “The strike upon Syria is EXACTLY the 100th YEAR anniversary of the U.S. ENTERING WORLD WAR 1.” 100 years is TWO Jubilee cycles. Is God using that fact to raise our consciousness of “the significance” of this event even more?

There’s even more TO SEE in the Jubilees which are converging upon 2017. (Again, I am NOT SETTING ANY DATES–but I share this to raise our AWARENESS of THIS PARTICULAR SEASON.)

100 years ago, April 6, 1917–the U.S. entered World War 1. It was also THE YEAR of the Balfour Declaration, the British mandate giving Jews the right to go settle in their Promised Land. TWO JUBILEES AGO.

50 years ago, in 1967, Israel reclaimed the territory of the West Bank and the Temple Mount. ONE JUBILEE AGO. This began THE ENDING of “the times of the Gentiles”–the “total fulfillment” of that END will happen during the approaching Tribulation. ONE JUBILEE AGO!

The year of 2017 is yet another Jubilee year, according to this structure. Time will “soon tell” what event will transpire in this “significant” year. There are MANY possibilities as prophetic scriptures are in MOVEMENT and CONVERGING upon the world right now.

From the time of the ZIONIST MOVEMENT in 1897 until the “newly proposed” nation of Israel was APPROVED by the U.N. in 1947 — yet another 50 year Jubilee period occurred. In 2017, we are at a 70-year interval MARKING ONE GENERATION “from that time” of 1947. Jesus said that “the generation” to see the fig tree put forth leaves (Israel’s rebirth) will NOT ALL PASS AWAY (through death) UNTIL ALL THE END TIME PROPHECIES ARE FULFILLED. That speaks volumes as we consider “the time” in which we NOW live. Psalm 90:10 DEFINES the “life expectancy” of mankind as 70 TO 80 YEARS and THEN “we FLY away.” Does that speak? Or what?

NOW I ASK: JUST WHERE DOES THAT PLACE US NOW IN THE UNFOLDING OF EVENTS OF BIBLE PROPHECY?

I STATE IT SIMPLY, WE ARE CURRENTLY ARRIVING AT A VERY “SIGNIFICANT TIME” IN GOD’S SCHEDULE. By all accounts, THE END IS HERE. (The exact timing from this day forward remains in God’s capable hands. But He is “quickly” going TO MOVE to fulfill His Word–it WILL “shortly” [SPEEDILY] come to pass. Revelation 1:1.)

God works in patterns and structures which speak to us as we search them out. JUST STAY IN TUNE IN HIM AND THE SURETY OF HIS WORD.

{ Here is a post I shared on The Jubilees: Close To Breaking The Seals Of The Title Deed? }

I happen to agree with her. We need to keep our wits about us as we watch but still share our thoughts in hopes that those who are not saved will see these things and turn to Jesus before it’s too late for them to do so. I have other posts here at my blog with more on the Psalm 83 battle and the Gog Magog or Ezekiel 38-39 battle so look for those if you want more information. Stay alert and keep watch. Time is so short now and I’m looking up for Jesus to come for his followers soon in the rapture but that’s just me. Or is it?

Jude 18-25: 18 They said to you, “In the last time there will be scoffers, following their own ungodly passions.” 19 It is these who cause divisions, worldly people, devoid of the Spirit. 20 But you, beloved, building yourselves up in your most holy faith and praying in the Holy Spirit, 21 keep yourselves in the love of God, waiting for the mercy of our Lord Jesus Christ that leads to eternal life. 22 And have mercy on those who doubt; 23 save others by snatching them out of the fire; to others show mercy with fear, hating even the garment stained by the flesh. 24 Now to him who is able to keep you from stumbling and to present you blameless before the presence of his glory with great joy, 25 to the only God, our Savior, through Jesus Christ our Lord, be glory, majesty, dominion, and authority, before all time and now and forever. Amen.

Now for this excellent video ~
About the time of the end the biblical prophet Ezekiel tells of a future invasion of Israel by a vast coalition of nations, known as the battle of Gog and Magog, we find this in Ezekiel chapters 38 and 39. As we read the headlines in the newspapers of today, and witness the conflicts in the Middle East, it’s not hard to imagine that this invasion prophesied over 2600 years ago, could be fulfilled in the immediate future. Ezekiel 36-37 predicts a gathering of the Jews to the nation of Israel, which will be followed by this massive invasion. For 19 centuries, the Jewish people were scattered throughout the world, and until May 14, 1948, there was no nation of Israel to invade. With the nation of Israel now a reality, the stage seems set for the war that will usher in the tribulation and the rise of the Antichrist; a war that will end with the destruction of Israel’s enemies by God Himself, and lead to the signing of a peace treaty with the Antichrist.

As you read Ezekiel 38 and 39, it isn’t just the creation of the nation of Israel that makes this prophecy seem likely to be fulfilled in the near future. The nations that God tells us will form this coalition against Israel seem more likely now than perhaps ever before to form just such an alliance.” The leaders of this coalition will be Russia and Iran, and currently both of these nations are right on Israel’s doorstep, under the pretense of battling ISIS in Syria. I believe that there are a couple of unfulfilled prophecies that will lead-up to this massive invasion of Israel, and as we read today’s headlines, we find that the fulfillment of these two prophesied events, could happen very soon!

A Watchman Report: The Fate of Damascus and the Psalm 83 War

Some news on the Syria strikes:

‘WE ARE PREPARED TO DO MORE’

USA ONE STEP AWAY FROM CLASH WITH RUSSIA…