Tu B’Av And The Summer Harvest 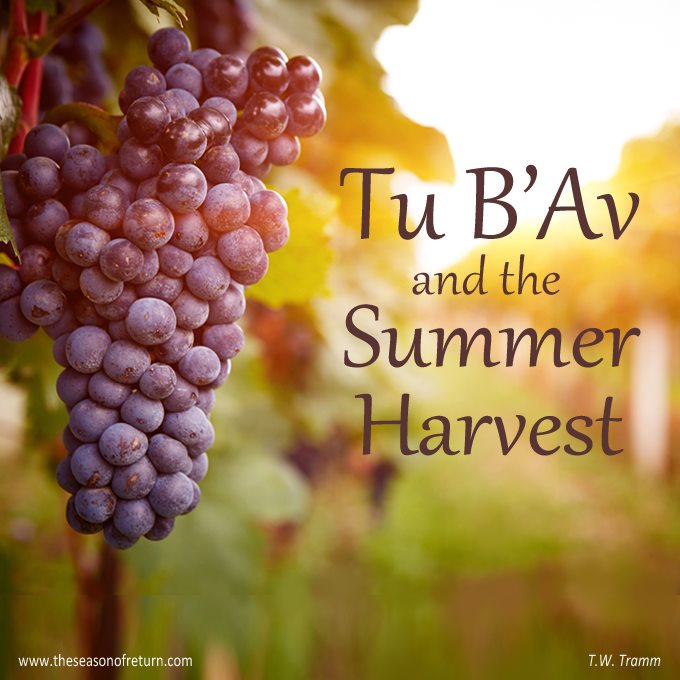 Now for some uplifting stuff! Here is the latest by T.W Tramm. Enjoy and keep looking up!!!!!

Tu B’Av And The Summer Harvest

Tu B’Av is traditionally a joyous day in Israel as it commemorates the lifting of the curse of death put on the generation who feared to take possession of the Promised Land.

According to the rabbis, each year on Tisha B’Av (Av 9), Moses would command the Children of Israel to dig graves and sleep in them as punishment for believing the spies’ bad report about the Land. Every year they would awaken to find that all those who had reached the age of sixty had died during the night.

When the final/40th year of Israel’s sentence of wandering the wilderness had passed, however, the last of that generation did not die on Tisha B’Av. Assuming they had erred in calculation, they waited another day, then another, for death to come. When the full moon appeared on Tu B’Av, they realized God had forgiven the sin of the spies.

After the Children of Israel entered Canaan, Tu B’Av began to be celebrated as the day they had been freed from the curse of the grave and allowed to enter the Promised Land under the leadership of Joshua, who is a prophetic type of Christ.

Another reason Tu B’Av is a time to celebrate is that it commemorates the lifting of the ban on inter-tribal marriage. To ensure the orderly division of the Promised Land between the 12 tribes of Israel, restrictions had been placed on marriages between members of different tribes. This restriction was lifted on the 15th of Av, making it a day of celebration and festivity.

Av 15 is also the day on which the tribe of Benjamin, which had been excommunicated for its behavior in the incident of the “Concubine at Givah,” was readmitted into the community of Israel and allowed to intermarry with other tribes (Judges 19-21).

Thus, in ancient Israel Tu B’Av became known as Matchmaking Day, the day on which virgins would dress in white and go out and dance in the vineyards to attract husbands.

Some speculate that Ruth’s wedding to Boaz—a typological picture of the wedding of the Church to Messiah—occurred on Tu B’Av. Scripture records that Ruth lived with her mother-in-law, Naomi, until all of the wheat harvest was complete (Ruth 2:21-23). Tu B’Av traditionally marks the beginning of the grape harvest and, therefore, an unofficial conclusion to the wheat harvest. This time, or soon after, is when Ruth would have stopped living with her mother-in-law to take up residence with her new husband/redeemer, Boaz.

Related to the grape harvest, a well-known rapture-typology in Song of Solomon associates ripened grapes with the coming of a Shepherd to gather and spirit away his beloved Shulammite maid:

“For, lo, the winter is past, the rain is over and gone; the flowers appear on the earth; the time of the singing of birds is come, and the voice of the turtle is heard in our land; the fig tree putteth forth her green figs, and the vines with the tender grape give a good smell. Arise, my love, my fair one, and come away” (Song 2:11-13).

Notice tender grapes are the final agricultural sign mentioned before the shepherd says, “Rise up, my love … and come away.”

The grape harvest is when new wine is made. The Apostle Peter associates “new wine” with the wheat harvest and the end of the age when, on the Church’s first Pentecost, he quotes Joel’s prophecy about the coming Day of the Lord (Acts 2).

Related to the Day of the Lord, Tu B’Av occurs at the full moon. Scripture links the full moon to the return of the goodman of the house, a typological picture of Jesus returning to settle accounts at the end of the age:

It makes sense that the goodman would return at the full moon as the moon is symbolic of the Church, or congregation of God, which will be harvested when it reaches a state of fullness.

Finally, Tu B’Av is the last festival of summer.

In Matthew, summer is a metaphor for the end of the age:

“Now learn this lesson from the fig tree: As soon as its twigs get tender and its leaves come out, you know that summer is near” (Matt. 24:32).

In Proverbs, summer is when the wise gather crops and the foolish sleep:

“He who gathers in summer is a wise son, but he who sleeps during harvest is a disgraceful son” (Prov. 10:5).

In Amos, summer is a time of God’s judgment upon Israel:

“This is what the Sovereign LORD showed me: a basket of summer fruit … Then the LORD said to me, ‘The time is ripe for my people Israel; I will spare them no longer’” (Amos 8:1, 2).

In Jeremiah, the Jews lament the passing of the summer harvest and their not being rescued:

In Micah, late summer is when the faithful have vanished from the earth:

“Misery is mine. Indeed, I am like one who gathers the summer fruits, as gleanings of the vineyard: There is no cluster of grapes to eat. My soul desires to eat the early fig. The faithful have vanished from the earth, and there is no one upright among men. They all lie in wait for blood; every man hunts his brother with a net” (Mic. 7:1-2).

Summer ends at the autumnal equinox, September 23rd, the seasonal dividing line between the spring and fall festivals.

Having highlighted how the types and themes of Tu B’Av, namely marriage, liberation from death, and the summer-full-moon, point to the harvest of believers, this is not to put forward that the Rapture will necessarily occur on this day.

For this reason it’s wise to keep watch today, on Tu B’Av, and every day!