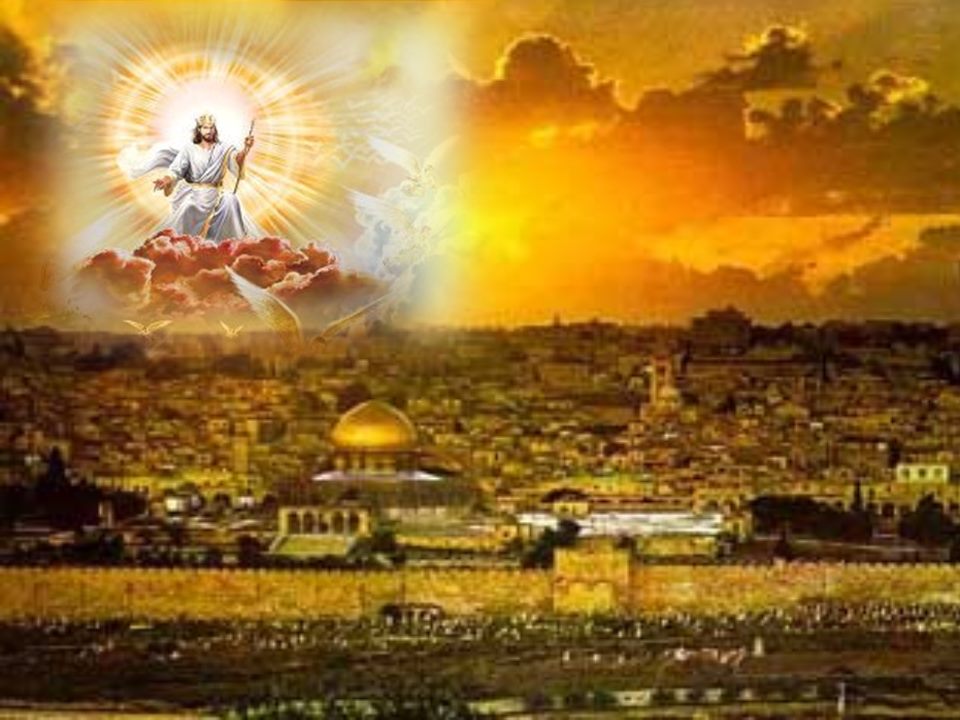 They have it (the land) and now the time of Jacob’s (Israel’s) Trouble or The Tribulation is approaching. This is the time that God will be dealing with Israel to bring them back to him and for them to finally recognize that JESUS is THE messiah that they have longed for and has been all along….It will be a very hard time for them and all those left behind in the world during those 7 years. TODAY is the day for salvation!

Prophetic message to the Jews from the Lord: ‘Thus says the Lord GOD: “I will gather you from the peoples, assemble you from the countries where you have been scattered, and I will give you the land of Israel.”’ ~ Ezekiel 11:17

I will cause the cities to be inhabited, and the waste places shall be rebuilt. And the land that was desolate shall be tilled, instead of being the desolation that it was in the sight of all who passed by. And they will say, ‘This land that was desolate has become like the garden of Eden, and the waste and desolate and ruined cities are now fortified and inhabited.’ Then the nations that are left all around you shall know that I am the Lord; I have rebuilt the ruined places and replanted that which was desolate. I am the Lord; I have spoken, and I will do it. ~ Ezekiel 36:33-36

Then, in the latter years…

“Therefore, son of man, prophesy, and say to Gog, Thus says the Lord God: On that day when my people Israel are dwelling securely, will you not know it? You will come from your place out of the uttermost parts of the north, you and many peoples with you, all of them riding on horses, a great host, a mighty army. You will come up against my people Israel, like a cloud covering the land. In the latter days I will bring you against my land, that the nations may know me, when through you, O Gog, I vindicate my holiness before their eyes.

“Thus says the Lord God: Are you he of whom I spoke in former days by my servants the prophets of Israel, who in those days prophesied for years that I would bring you against them? But on that day, the day that Gog shall come against the land of Israel, declares the Lord God, my wrath will be roused in my anger.

For in my jealousy and in my blazing wrath I declare, On that day there shall be a great earthquake in the land of Israel. The fish of the sea and the birds of the heavens and the beasts of the field and all creeping things that creep on the ground, and all the people who are on the face of the earth, shall quake at my presence. And the mountains shall be thrown down, and the cliffs shall fall, and every wall shall tumble to the ground.

I will summon a sword against Gog on all my mountains, declares the Lord God. Every man’s sword will be against his brother. With pestilence and bloodshed I will enter into judgment with him, and I will rain upon him and his hordes and the many peoples who are with him torrential rains and hailstones, fire and sulfur.
So I will show my greatness and my holiness and make myself known in the eyes of many nations. Then they will know that I am the Lord. ~ Ezekiel 38: 14-23

“And I will set my glory among the nations, and all the nations shall see my judgment that I have executed, and my hand that I have laid on them. The house of Israel shall know that I am the Lord their God, from that day forward. And the nations shall know that the house of Israel went into captivity for their iniquity, because they dealt so treacherously with me that I hid my face from them and gave them into the hand of their adversaries, and they all fell by the sword. I dealt with them according to their uncleanness and their transgressions, and hid my face from them.

The Lord Will Restore Israel

“Therefore thus says the Lord God: Now I will restore the fortunes of Jacob and have mercy on the whole house of Israel, and I will be jealous for my holy name. They shall forget their shame and all the treachery they have practiced against me, when they dwell securely in their land with none to make them afraid, when I have brought them back from the peoples and gathered them from their enemies’ lands, and through them have vindicated my holiness in the sight of many nations. Then they shall know that I am the Lord their God, because I sent them into exile among the nations and then assembled them into their own land. I will leave none of them remaining among the nations anymore. And I will not hide my face anymore from them, when I pour out my Spirit upon the house of Israel, declares the Lord God.” ~ Ezekiel 39: 21-29

Listen to me, you who pursue righteousness, you who seek the Lord: look to the rock from which you were hewn, and to the quarry from which you were dug. Look to Abraham your father and to Sarah who bore you; for he was but one when I called him, that I might bless him and multiply him. For the Lord comforts Zion; he comforts all her waste places and makes her wilderness like Eden, her desert like the garden of the Lord; joy and gladness will be found in her, thanksgiving and the voice of song.

“Give attention to me, my people, and give ear to me, my nation; for a law will go out from me, and I will set my justice for a light to the peoples. My righteousness draws near, my salvation has gone out, and my arms will judge the peoples; the coastlands hope for me, and for my arm they wait. Lift up your eyes to the heavens, and look at the earth beneath; for the heavens vanish like smoke, the earth will wear out like a garment, and they who dwell in it will die in like manner; but my salvation will be forever, and my righteousness will never be dismayed.

“Listen to me, you who know righteousness, the people in whose heart is my law; fear not the reproach of man, nor be dismayed at their revilings. For the moth will eat them up like a garment, and the worm will eat them like wool, but my righteousness will be forever, and my salvation to all generations.”

Awake, awake, put on strength, O arm of the Lord; awake, as in days of old, the generations of long ago. Was it not you who cut Rahab in pieces, who pierced the dragon? (Nibiru/Nemesis? Also see “Relevant Links” section below) Was it not you who dried up the sea, the waters of the great deep, who made the depths of the sea a way for the redeemed to pass over? And the ransomed of the Lord shall return and come to Zion with singing; everlasting joy shall be upon their heads; they shall obtain gladness and joy, and sorrow and sighing shall flee away.

“I, I am he who comforts you; who are you that you are afraid of man who dies, of the son of man who is made like grass, and have forgotten the Lord, your Maker, who stretched out the heavens and laid the foundations of the earth, and you fear continually all the day because of the wrath of the oppressor, when he sets himself to destroy? And where is the wrath of the oppressor?

He who is bowed down shall speedily be released; he shall not die and go down to the pit, neither shall his bread be lacking. I am the Lord your God, who stirs up the sea so that its waves roar—the Lord of hosts is his name. And I have put my words in your mouth and covered you in the shadow of my hand, establishing the heavens and laying the foundations of the earth, and saying to Zion, ‘You are my people.’”

Wake yourself, wake yourself, stand up, O Jerusalem, you who have drunk from the hand of the Lord the cup of his wrath, who have drunk to the dregs the bowl, the cup of staggering. There is none to guide her among all the sons she has borne; there is none to take her by the hand among all the sons she has brought up. These two things have happened to you—who will console you? devastation and destruction, famine and sword; who will comfort you? Your sons have fainted; they lie at the head of every street like an antelope in a net; they are full of the wrath of the Lord, the rebuke of your God.

Therefore hear this, you who are afflicted, who are drunk, but not with wine: Thus says your Lord, the Lord, your God who pleads the cause of his people: “Behold, I have taken from your hand the cup of staggering; the bowl of my wrath you shall drink no more; and I will put it into the hand of your tormentors, who have said to you, ‘Bow down, that we may pass over’; and you have made your back like the ground and like the street for them to pass over.” ~ Isaiah 51

Because JESUS Was Pierced for ALL of Our Transgressions, including for Israel….

He Was Pierced for Our Transgressions
Behold, my servant shall act wisely; he shall be high and lifted up, and shall be exalted.
As many were astonished at you—his appearance was so marred, beyond human semblance, and his form beyond that of the children of mankind—so shall he sprinkle many nations.
Kings shall shut their mouths because of him, for that which has not been told them they see, and that which they have not heard they understand. ~ Isaiah 52: 13-15

And on that day I will seek to destroy all the nations that come against Jerusalem.

Him Whom They Have Pierced
“And I will pour out on the house of David and the inhabitants of Jerusalem a spirit of grace and pleas for mercy, so that, when they look on me, on him whom they have pierced, they shall mourn for him, as one mourns for an only child, and weep bitterly over him, as one weeps over a firstborn.
On that day the mourning in Jerusalem will be as great as the mourning for Hadad-rimmon in the plain of Megiddo. ~ Zechariah 12:9-11

The Coming Day of the Lord

Behold, a day is coming for the Lord, when the spoil taken from you will be divided in your midst. For I will gather all the nations against Jerusalem to battle, and the city shall be taken and the houses plundered and the women raped. Half of the city shall go out into exile, but the rest of the people shall not be cut off from the city. Then the Lord will go out and fight against those nations as when he fights on a day of battle. On that day his feet shall stand on the Mount of Olives that lies before Jerusalem on the east, and the Mount of Olives shall be split in two from east to west by a very wide valley, so that one half of the Mount shall move northward, and the other half southward. And you shall flee to the valley of my mountains, for the valley of the mountains shall reach to Azal. And you shall flee as you fled from the earthquake in the days of Uzziah king of Judah. Then the Lord my God will come, and all the holy ones with him.

Now for a very interesting video to consider from Wackadoodle Samoan….