“They dress the wound of my people as though it were not serious.” 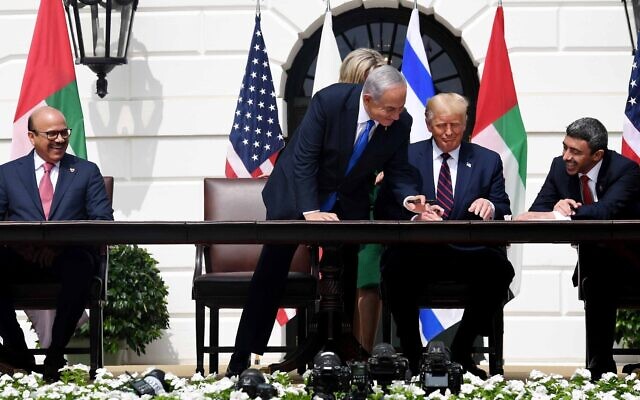 Time of Jacob’s Trouble (7 year Tribulation) will soon be coming but the whole world will be in the middle of it. NOW is the day of salvation before it comes!

“They dress the wound of my people as though it were not serious. ‘Peace, peace,’ they say, when there is no peace …. I appointed watchmen over you and said, ‘Listen to the sound of the trumpet!’ But you said, ‘We will not listen.’ Therefore … I am bringing disaster on this people [Israel], the fruit of their schemes, because they have not listened to my words (Jer. 6: 14, 17-19)

Why the Abrahamic accord is taking away from God and practically a slap in his face. World leaders should take God’s will and God’s plans into account and not their own but, they don’t. They should not use God’s covenants and twist them, add to them or, try to “fix” them. These leaders do not TRULY respect God and so God will step in to correct them/us….

“Five times in Genesis 12, as God is giving the Abrahamic Covenant, He says, “I will.” Clearly, God takes the onus of keeping the covenant upon Himself. The covenant is unconditional. One day, Israel will repent, be forgiven, and be restored to God’s favor (Zechariah 12:10–14; Romans 11:25–27). One day, the nation of Israel will possess the entire territory promised to them. One day, the Messiah will return to set up His throne, and through His righteous rule the whole world will be blessed with an abundance of peace, pleasure, and prosperity.” 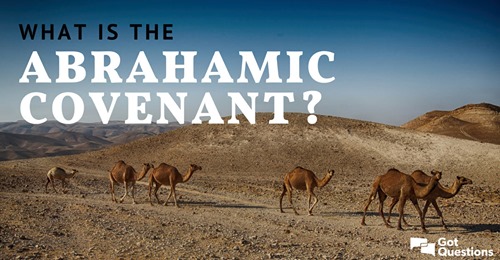 CLICK here for more on what the true Abrahamic covenant (not accord) is about: What is the Abrahamic Covenant? 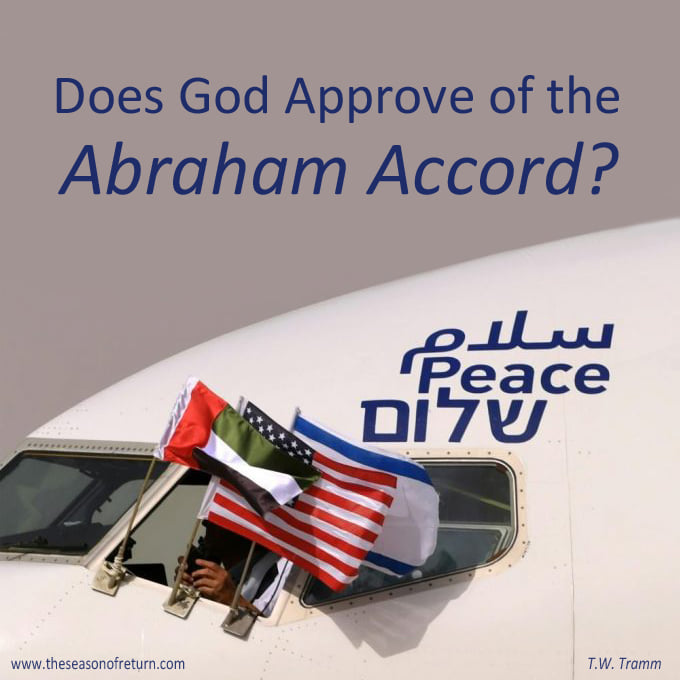 SEPTEMBER 15, 2020—
As an historic peace deal called the Abraham Accord is signed in Washington, rains from Hurricane Sally—the first of 7 storms lined up in the Atlantic—are beginning to pound the US Gulf Coast.
A particularly slow moving storm, Sally is projected to bring historic flooding. Given the timing, the same day as the Abraham Accord, it’s interesting that the name Sally is a diminutive of the Hebrew Sarah, the name given Abraham’s wife when He entered into an eternal land covenant with God (Gen. 17).

Sally is also a variation of the name Salamon and thus connected to the Hebrew word for “peace.”
The onslaught of calamity plaguing the US—fires, floods, racial unrest, and a pandemic with a host of negative consequences— has some Christians wondering whether it’s related to the Trump Administration’s peace efforts in the Middle East, which aim to create a separate Palestinian state inside the borders of Israel.

God says he will judge those who divide the Land:
“I will … gather all the Gentiles, and bring them down to the Valley of Judgment … [because] these Gentiles have divided my land” (Joel 3:2 BST)

Some would argue that the Abraham Accord is not an affront to God because land is not being given away directly.
However, the accord maintains Arab support for the establishment of a Palestinian state and stipulates that Israel will put a freeze on plans to annex the West Bank as was planned to occur this summer.

What happens when Israel has an opportunity to occupy the Land and hesitates? Ask the Israelites who spent 40 years wandering the wilderness for failing to take the Land in Moses’ day (Num. 13, 14).

In addition to chastening Israel for failing to occupy the Land, God warns His people not to enter into covenants with those already dwelling there:
“Do not make a covenant with them or with their gods. Do not let them live in your land or they will cause you to sin against me, because the worship of their gods will certainly be a snare to you” (Ex. 23: 32-33).
The Land of Israel as defined in Scripture encompasses vast swaths of land presently occupied by worshippers of the false moon-god, Allah. While Scripture makes provision for non-Jews who wish to dwell in the Land in accordance with the Lord’s statutes, those who are unwilling to live by God’s laws, who worship other gods, or who are opposed to Israel, are said to be a snare

Finally, the Lord commands Israel to destroy any altars in the Land dedicated to false gods (Judges 2:2). Yet the Dome of the Rock, a shrine to Allah, stands on the Temple Mount as a site of blasphemous veneration. Inscriptions on the inner and outer walls of the Islamic shrine profanely state that “Jesus was only a messenger” and that God has no son or “partner in sovereignty.”

Meanwhile, prayer to the God of Israel is strictly prohibited on the Temple Mount by the controlling Islamic religious trust, the Waqf. Given that the Temple Mount in Jerusalem is the location from which Jesus will reign during the Millennium, one immediately recognizes the problem with an Islamic shrine occupying space there. It is truly an “abomination that causes desolation.” And so is the Abraham Accord.

CONCLUSION
The Abraham Accord is in opposition to God’s plan for Israel as it puts a halt on Jewish occupation of the Promised Land and perpetuates the status quo (Islamic control) of the Temple Mount in exchange for political and economic gain, plus a false sense of peace and security.

The Land belongs to the Lord (Lev. 25:23). He has given it to the offspring of Abraham, Isaac, and Jacob to occupy until He returns. Instead of occupying the Land, however, Israel is pursuing peace with those illegitimately squatting there.

Going forward, it’s difficult to say how the Abraham Accord will play out, which Arab-Muslim countries will join and when. However, for those anticipating the escape we call the Rapture, it may not matter. The sign that Judgment Day is imminent is people saying “peace and safety” (1 Thess. 5:3).  We are already there.

On the eve of the biblical Feast of Trumpets, watchmen are sounding the alarm about a fateful deal being struck in the Middle East. Tragically, the trumpet blasts are falling on deaf ears.

“They dress the wound of my people as though it were not serious. ‘Peace, peace,’ they say, when there is no peace …. I appointed watchmen over you and said, ‘Listen to the sound of the trumpet!’ But you said, ‘We will not listen.’ Therefore … I am bringing disaster on this people [Israel], the fruit of their schemes, because they have not listened to my words (Jer. 6: 14, 17-19).
………………………………………………………………….
NOTES:
1. Trump hosts Arab, Israeli leaders to ink historic deal: ‘A new Middle East’
https://nypost.com/2020/09/15/trump-hosts-arab-israeli-leaders-to-ink-historic-deal/
2. A crawling Hurricane Sally is threatening a ‘historic rainfall event’ in parts of the Gulf Coast
https://www.cnn.com/2020/09/15/weather/hurricane-sally-tuesday/index.html
3. Sally Etymology:
https://www.everydayknow.com/names-that-mean-peace/
https://www.google.com/search?q=sally+etymology&oq=sally+etymology&aqs=chrome..69i57j0l7.5674j0j15&sourceid=chrome&ie=UTF-8
https://www.name-doctor.com/name-sally-meaning-of-sally-6623.html#:~:text=MEANING%3A,Testament%2C%20and%20the%20Islamic%20Quran
https://www.names.org/n/sally/about
https://charlies-names.com/en/sally/#:~:text=Meaning%20of%20Sally,and%20%E2%80%9Cpeace%E2%80%9D%20for%20boys.
4. Examples of blasphemous “antichrist” inscriptions on the inside of the octagonal arcade of the Dome of the Rock:
“Messiah, Jesus son of Mary, was only a Messenger of God, and His Word which He conveyed unto Mary, and a spirit from Him. So believe in God and His messengers, and say not ‘Three’ [trinity] – Cease!”
“God is only One God. Far be it removed from His transcendent majesty that He should have a son.”
Inscription on the outside of the Dome of the Rock:
“God, Who hath not taken unto Himself a son, and Who hath no partner in the Sovereignty, nor hath He any protecting friend through dependence….Muhammad is the Messenger of God.”
https://ntbc.wordpress.com/inscriptions-about-jesus-on-islams-dome-of-the-rock-jerusalem/
5. Daniel and Matthew speak of the “abomination that causes desolation” on the Temple Mount (Dan. 9:27; Matt. 24:15, 16).
6. It should be emphasized that the Abraham Accord is not an affront because it makes peace between Jews and Arabs. Both Jews and Arabs are children of Abraham and loved by God. The accord is an affront because it puts a freeze on Jewish habitation of the Land in opposition to God’s command to inhabit it, in exchange for a false sense of security.

Please check out Bro Keegan Fernandes’ site. You will not regret it!! I made an image for his site below. You can click the image or here for the link: RAPTURE COUNTDOWN 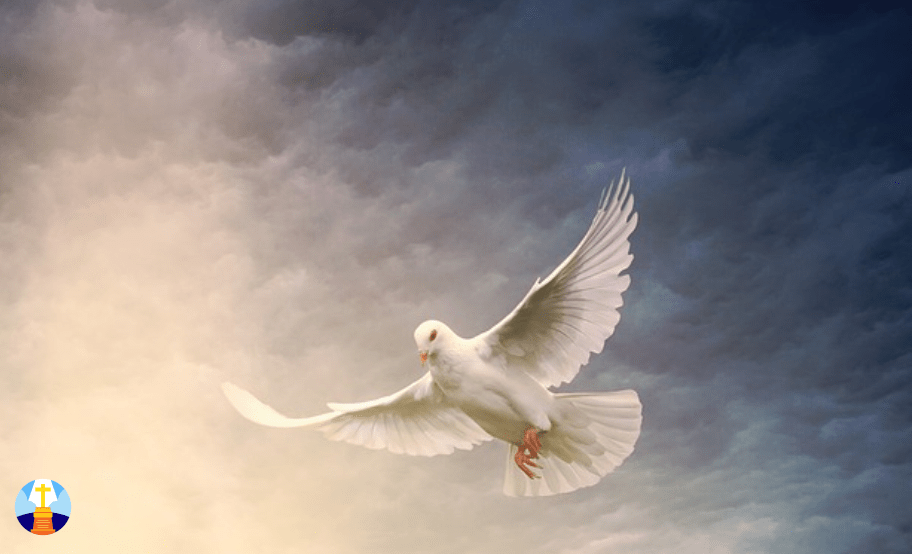 And to finish on an upbeat positive note…..I have shared Bro Chooch’s site in the past but here is his latest video below that he just posted from a rapture dream Bro. Keegan had. Enjoy 🙂

Here's The Real Truth About The Jews!
Magnetic catastrophe that wiped out Neanderthals is due to happen again, scienti...
Peace Plan: A Line Has Been Drawn And They're About To Cross It. We are at the c...
Normal isn't coming back... JESUS IS!