And now we have this….They really are setting up shop before they come on the Earth again…. 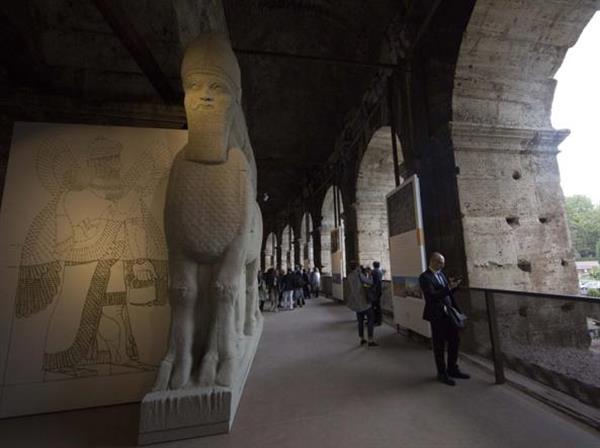 If you thought having “the harbinger of Baal” in New York City was bad, wait until you hear what they are doing in Rome.  A reproduction of a winged bull from the ancient city of Nimrud, Iraq and a recreation of part of the ceiling from the Temple of Bel (Baal) are being put on display in the Colosseum in Rome, Italy.  This exhibit has been entitled “Rising From the Ashes: Ebla, Nimrud, Palmyra”, and it is being sponsored by UNESCO.  As I will discuss below, the statue of the winged bull from Nimrud and the Temple of Bel both have direct links to ancient Babylon and a very insidious character from the Bible known as Nimrod.  Symbols have meaning, and to have these symbols erected at one of the most famous landmarks in Rome is more than just a little bit disturbing. From ancient times, Nimrod and the various pagan gods that were based on Nimrod were often represented as human-animal hybrids.  In this case, a bull with a human head that also has wings is known as a “lamassu”.  Accor

Source: The Winged Bull Of Nimrod And Part Of The Temple Of Baal Are Being Displayed In The Colosseum In Rome