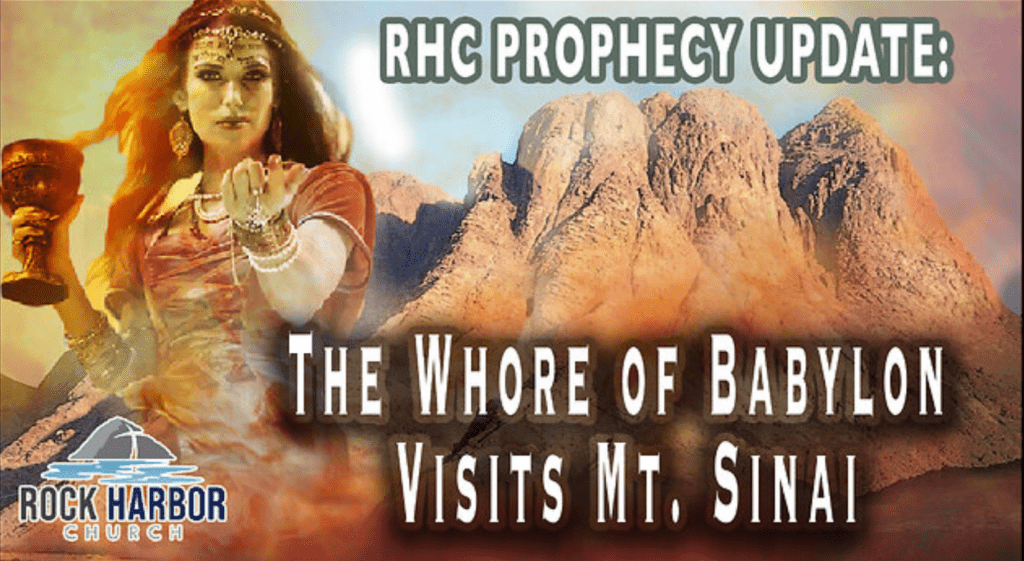 I was going to just add Rock Harbor’s prophecy update as an updated added link in my last blog post about this (in relevant links section below) but, I was afraid it might get over looked or missed all together. It’s a must listen to video so I made it its own post. Here it is below.

The Globalist continue to push their “save the planet” false narrative on the world. In an effort to seize economic control and power, they are determined to destroy the economies of the nations (capitalism) and are willing to allow mass starvation and death to millions by their green energy policies and cutting the world off of fossil fuels. Recently, the UN is having their COP27 meeting this November to “save the planet” which is really agenda 2030, with all the elites of the world and this year it is in the Sinai Peninsula. Alongside this meeting another group who will in attendance called the Interfaith Center for Sustainable Development will go to Mt. Sinai, promote religious ecumenism, and give their own 10 commandments for people of all religions to abide under to go green and serve the Whore of Babylon. This is the most sacrilegious and satanic thing these people could do. It is an affront to God and only judgment can come to these people who are committing the ultimate blaspheme. Join us today as we explore this set up of the Whore of Babylon to rule the world religiously through the green dragon.

TRANSCRIPT CLIP OF THE BELOW VIDEO:

“… “Interfaith climate events will take place in Sinai that will be heart stirring transformative a moment of inspiration for religious communities and for Humanity religious leaders will call for a re-examination of what deep-seated attitudes”. What do you think that deep-seated attitude that they want to change in us is? … Yes, it’s attacking the Creator. Acting as if man has control of the planet, that man is his own savior. Let me read this real quick (Genesis 8:20-23) … Then Noah built an altar to the Lord and took every clean animal and every clean bird and offered burnt offerings on the altar. This is After the flood and, the Lord smelled the soothing Aroma then the Lord said in his heart “I will never again curse the ground for man’s sake although the imagination of man’s heart is evil from his youth nor will I again destroy every living thing as I have done”. Here’s the key phrase, this is what they’re attacking while the Earth remains this is a statement from God seed time and harvest cold and heat winter and summer and day and night shall not cease end of story! The whole climate movement is an attack on God’s promise that I will maintain your planet your heat and cold your Harvest times and season until the Earth is destroyed and when does he destroy it? At the end of the Messianic age! Man has no effect on it because God is holding it together! So on a satanic level this whole thing is to up to man not God holding things together. And then you move into the New Testament and you go to Colossians and it says that actually Christ is holding the whole thing together it’s him and his power holding everything together not man!”

*** Or watch HERE if YouTube deletes the above video. ***

Genesis 8:20-23
Then Noah built an altar to the Lord and took some of every clean animal and some of every clean bird and offered burnt offerings on the altar. 21 And when the Lord smelled the pleasing aroma, the Lord said in his heart, “I will never again curse the ground because of man, for the intention of man’s heart is evil from his youth. Neither will I ever again strike down every living creature as I have done. While the earth remains, seedtime and harvest, cold and heat, summer and winter, day and night, shall not cease.”

God is in control not man! Anything other than God’s actual word, not man made traditions and add ons to his word, are FALSE and blasphemous! You can see what is coming. The one world religion and government with ANTI-Christ at its head. TODAY is the BEST day for your salvation! You are fast running out of tomorrows to call on Jesus to save you BEFORE the 7 years Tribulation (The Time of Jacob’s/Israel’s Trouble) begins!  HOW TO GET TO HEAVEN

Colossians 1:13-23
He (God) has delivered us from the domain of darkness and transferred us to the kingdom of his beloved Son (Jesus), in whom we have redemption, the forgiveness of sins.
The Preeminence of Christ

He is the image of the invisible God, the firstborn of all creation. For by him all things were created, in heaven and on earth, visible and invisible, whether thrones or dominions or rulers or authorities—all things were created through him and for him. And he is before all things, and in him all things hold together. And he is the head of the body, the church. He is the beginning, the firstborn from the dead, that in everything he might be preeminent. For in him all the fullness of God was pleased to dwell, and through him to reconcile to himself all things, whether on earth or in heaven, making peace by the blood of his cross.

And you, who once were alienated and hostile in mind, doing evil deeds, he has now reconciled in his body of flesh by his death, in order to present you holy and blameless and above reproach before him, if indeed you continue in the faith, stable and steadfast, not shifting from the hope of the gospel that you heard, which has been proclaimed in all creation under heaven…

They're Coming Baaaaack (CERN, Revelation 12, Black Cube Saturn Worship and More...
And what I say to you, I say to all: Watch! Will it be October?
2019 Rapture?
Quantum Divination, The Mandela Effect, AI, Mark Of The Beast. Talks With Anthon...