NOTE: Some of these links and info I found online. If or when you do your own research just be extremely cautious of any site you visit. I DO NOT EVER recommend any person or site who are just nasty hating people. The problem with the information being revealed about this issue is that does in fact cause true antisemites to come out of the woodwork. And that hurts the truth when it happens because people shut down and stop looking further. I took out some language that may be harmful and reworded what I did use. However, I am not the source for all the work it took to put the links and images below together. I just want to be clear about that. But, what is left behind can be searched on on your own. PLEASE do not tie a religious system to all Jews!! As this Got Questions link** notes here: Different sects of Judaism have different views on the Talmud. The Orthodox sect holds that the Oral Law or Talmud is just as inspired as the Bible, but Conservative and Reform Jewish sects do not. Reform and Conservative sects believe they can interpret the Talmud as written by rabbis but are not necessarily required to follow it. Karaite Jews do not follow the Talmud or rabbinic teachings at all but only the Hebrew Bible. The Got Questions site has some good links to read about some basics of the Talmud but they do not go deeper into it *** 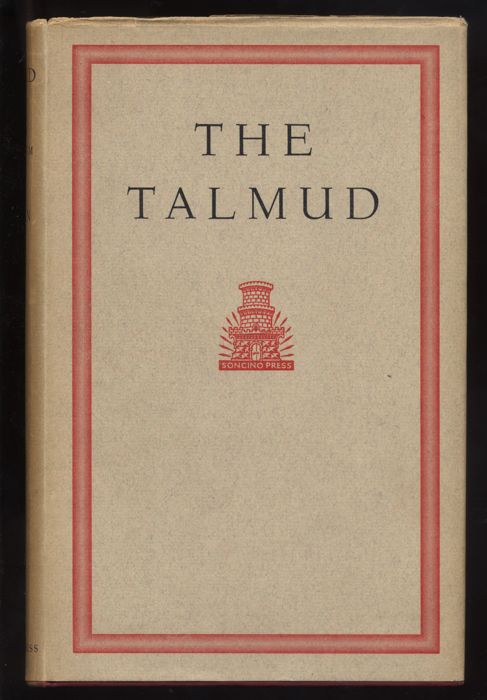 Babylonian Talmud is culmination of oral teachings of the scribes & pharisees that Christ so adamantly rebuked. It is composed of the Mishnah & Gemara, the talks of rabbis over the ages. Since the time of Moses, they have always attested their teachings were oral, not written, chanted not read, & spelled out, or recited. **After the Mishnah was published, it was studied exhaustively by generations of rabbis in both Babylonia and Israel. From AD 200—500, additional commentaries on the Mishnah were compiled and put together as the Gemara. Actually, there are two different versions of the Gemara, one compiled by scholars in Israel (c. AD 400) and the other by the scholars of Babylonia (c. AD 500). Together, the Mishnah and the Gemara form the Talmud. Since there are two different Gemaras, there are two different Talmuds: the Babylonian Talmud and the Jerusalem (or Palestinian) Talmud.

“The Talmud is the lifeblood of the people. Most Judaism practiced today is not the Five Books of Moses. You would find it in the Talmud.” – Rabbi Michael Stern 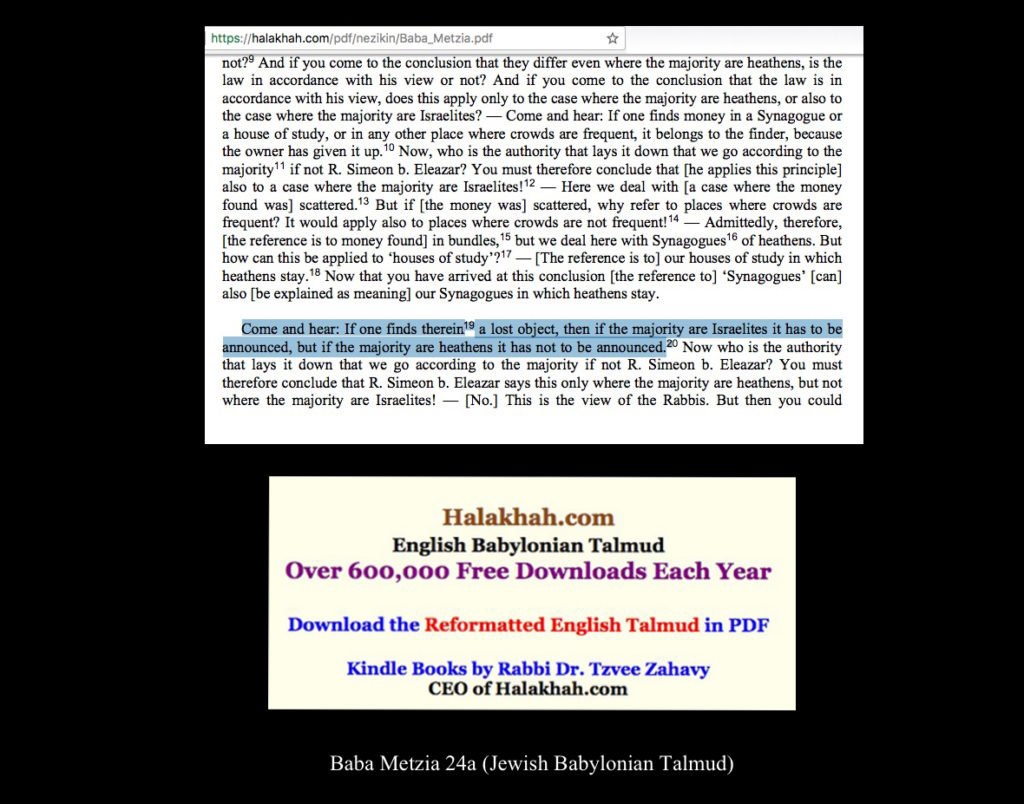 “In many ways the Talmud is the most important book in Jewish culture, the backbone of creativity and of national life. No other work has had a comparable influence on the theory & practice of Jewish life, shaping spiritual content and serving as a guide to conduct.” –Rabbi Adin Steinsaltz 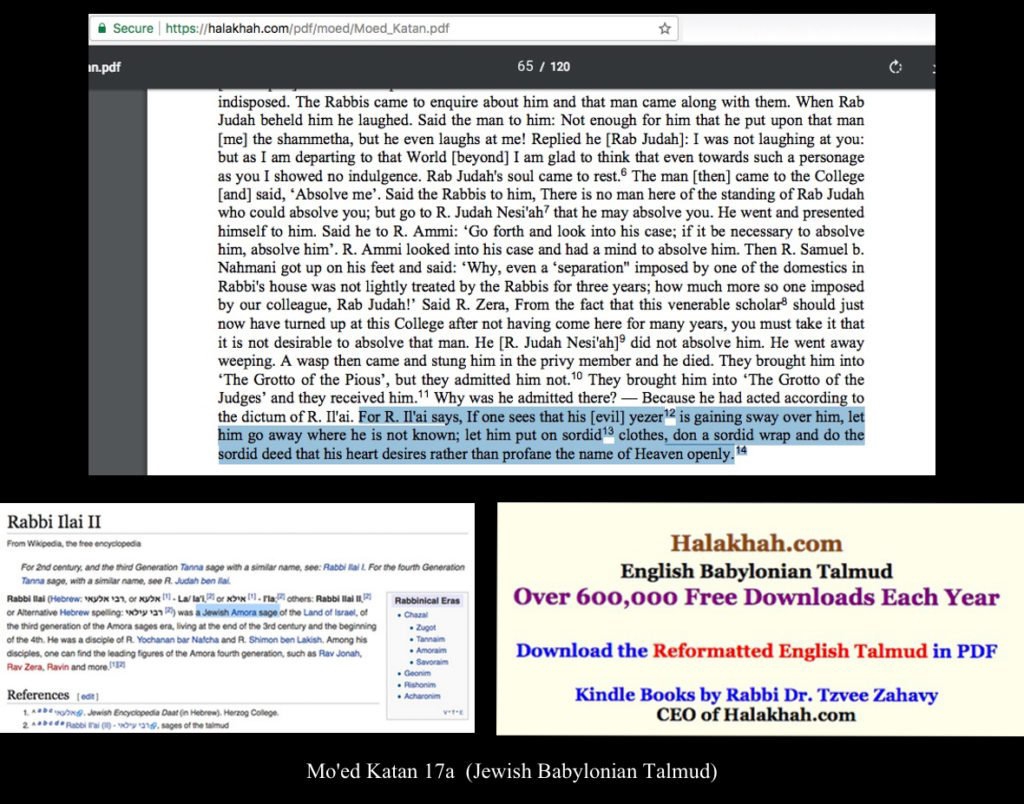 “The modern Jew is the product of the Talmud.” -– Michael Rodkinson, in preface of Babylonian Talmud, page XI 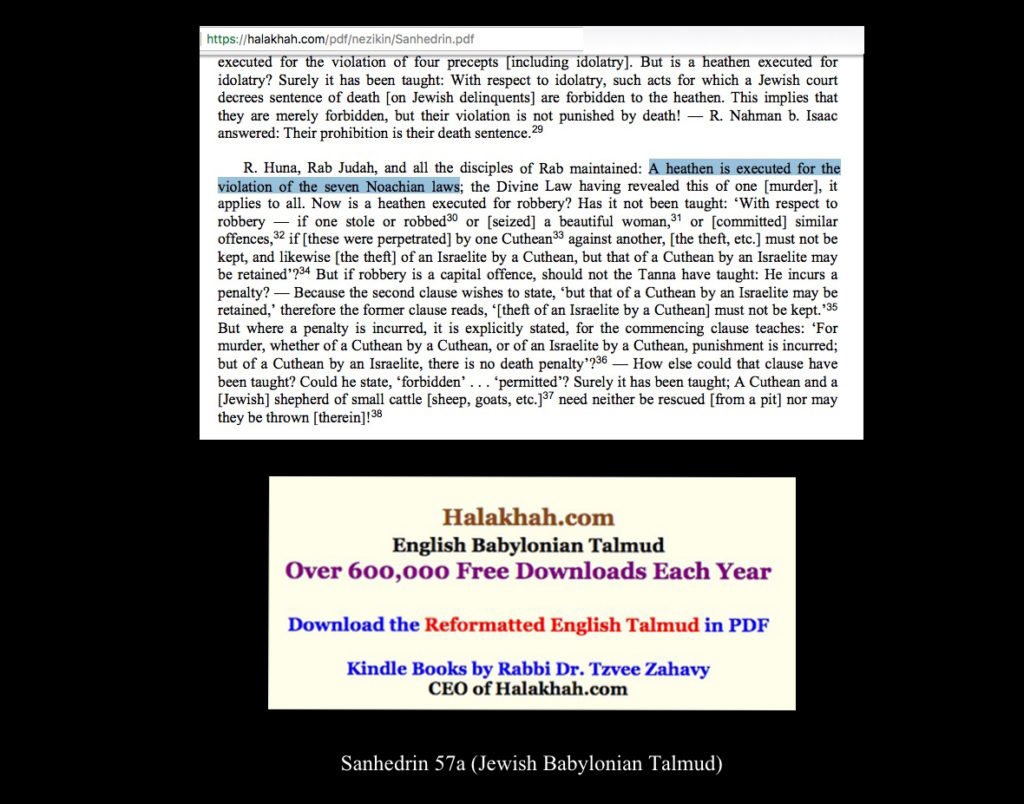 “The Talmud is to this day the circulating heart’s blood of the Jewish religion. Whatever laws, customs, or ceremonies we observe-whether we are Orthodox, Conservative, Reform, or merely spasmodic sentimentalists-we follow the Talmud. It is our common law.” -– Herman Wouk, “This is My God.” 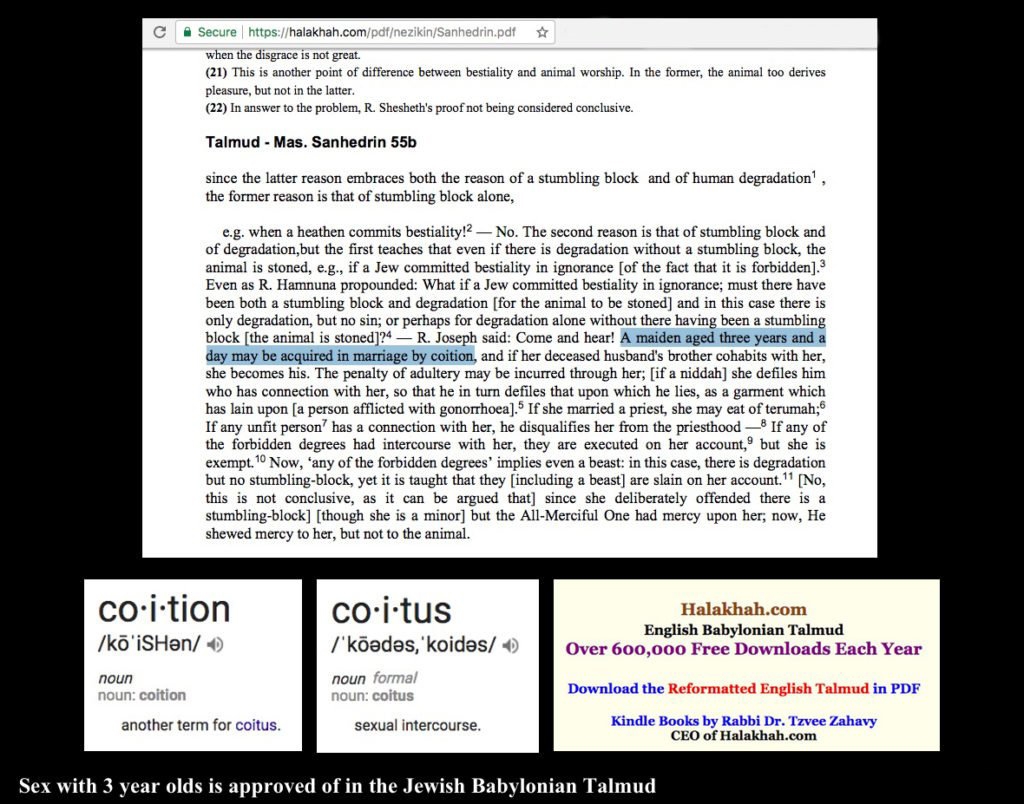 “The path of life for a Jew was set forth in the sacred writings & summed up by rabbinic sages in law codes, whose prime source was the Talmud & its interpreters.” 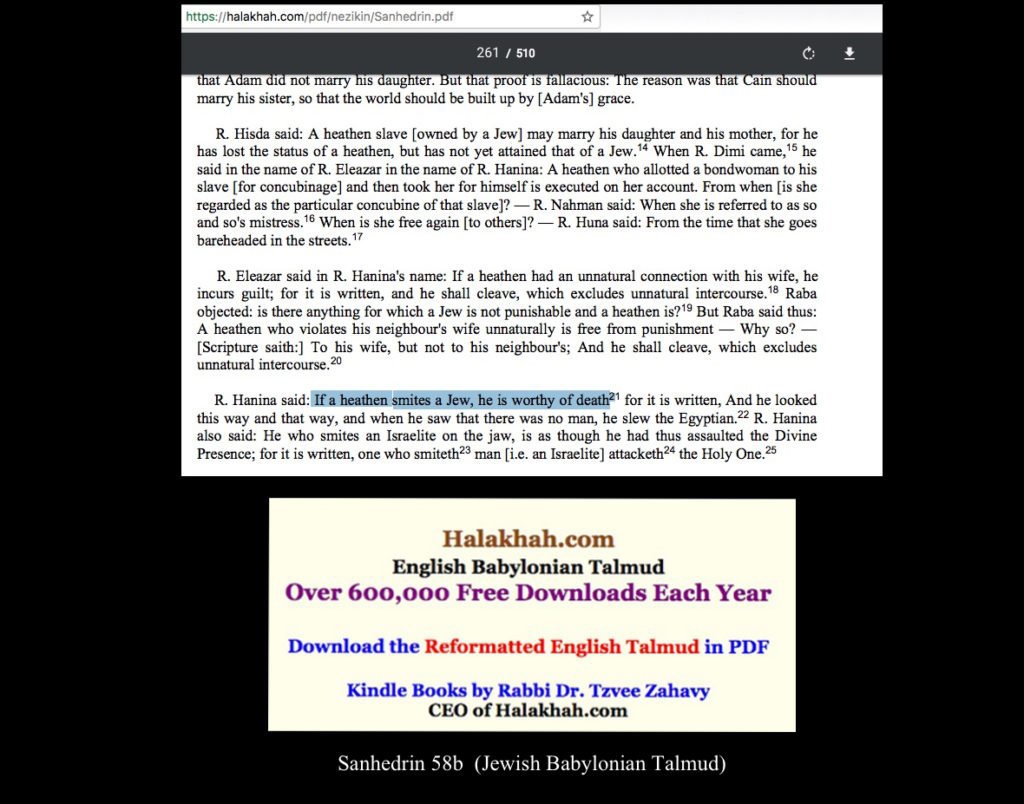 “and although a married Gentile woman is forbidden to the Gentiles, in any case a Jew is exempted.’ This does not imply that sexual inter-course between a Jewish man and a Gentile woman is permitted – quite the contrary. But the main punishment is inflicted on the Gentile woman; she must be executed, even if she was raped by the Jew: ‘If a Jew has coitus with a Gentile woman, whether she be a child of three or an adult, whether married or unmarried, and even if he is a minor aged only nine years and one day – because he had willful coitus with her, she must be killed, as is the case with a beast, because through her a Jew got into trouble. The Jew, however, must be flogged, and if he is a Kohen (member of the priestly tribe) he must receive double the number of lashes, because he has committed a double offense: a Kohen must not have inter-course with a prostitute, and all Gentile women are presumed to be prostitutes.” — Israel Shahak, Jewish History, Jewish Religion, Pluto Press, London 1994, page 87 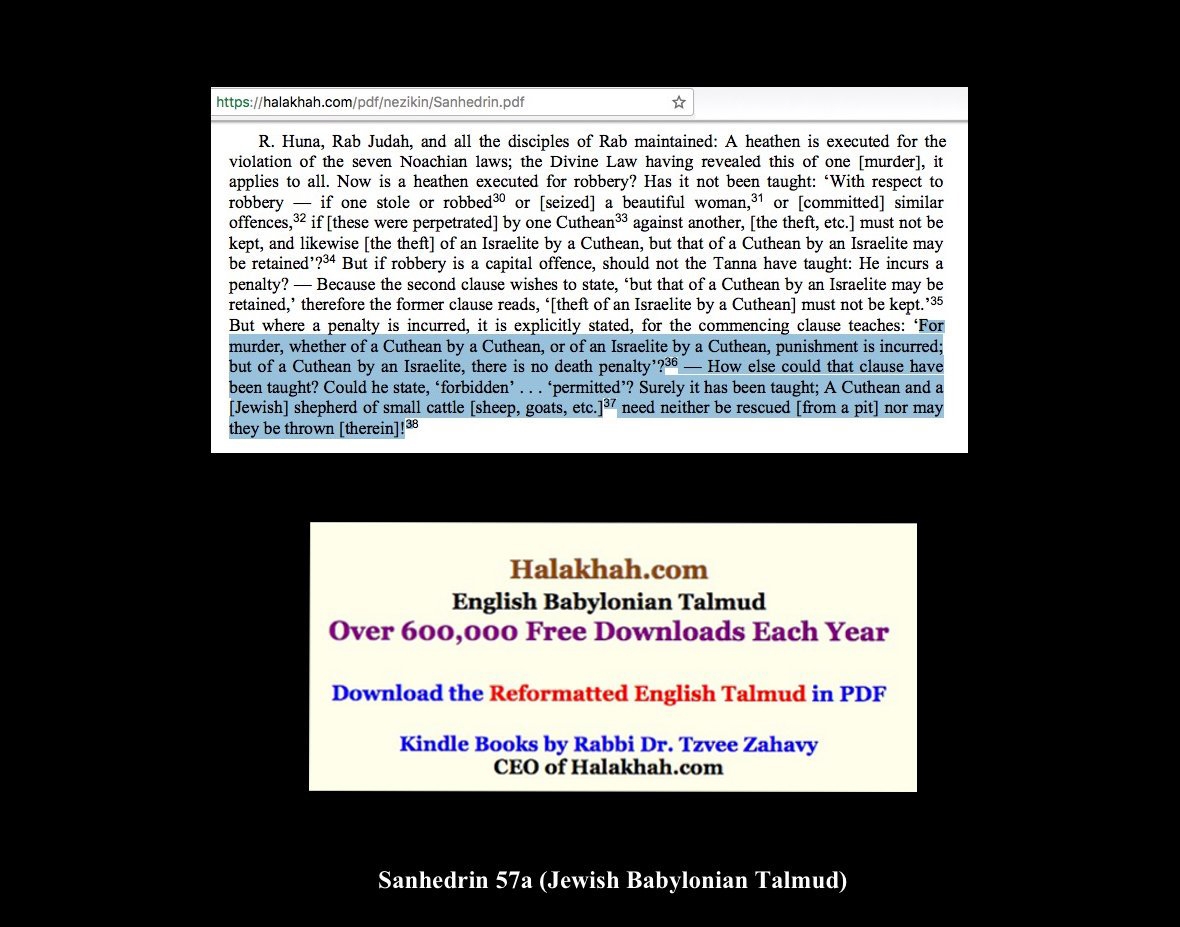 So few have ever even looked into it to see if the rumors going around about the Talmud are true or not. Can the Talmud really be  as evil as they say it is? You be the judge.

Truth About The Babylonian Talmud Videos

Teachings of the Jewish Talmud:

Where a Jew Should Do Evil

Moed Kattan 17a: If a Jew is tempted to do evil he should go to a city where he is not known & do the evil there

Erubin 21b. Whosoever disobeys the rabbis deserves death & will be punished by being boiled in hot excrement in hell.

Hitting a Jew is the same as hitting God

Sanhedrin 58b. If a heathen (gentile) hits a Jew, the gentile must be killed.

Sanhedrin 57a . A Jew need not pay a gentile (“Cuthean”) the wages owed him for work.

Jews May Steal from Non-Jews

Baba Mezia 24a . If a Jew finds an object lost by a gentile (“heathen”) it does not have to be returned. (Affirmed also in Baba Kamma 113b).

Sanhedrin 57a . When a Jew murders a gentile (“Cuthean”), there will be no death penalty. What a Jew steals from a gentile he may keep.

Baba Kamma 37b. The gentiles are outside the protection of the law & God has “exposed their money to Israel.”

Jews May Lie to Non-Jews

Baba Kamma 113a. Jews may use lies (“subterfuges”) to circumvent a Gentile

Yebamoth 98a. All gentile children are animals.

Abodah Zarah 36b. Gentile girls are in a state of niddah (filth) from birth.

Sanhedrin 106a . Says Jesus’ mother was a whore: “She who was the descendant of princes & governors played the harlot with carpenters.”

Also in footnote #2 to Shabbath 104b of the Soncino edition, it is stated that in the “uncensored” text of the Talmud it is written that Jesus mother, “Miriam the hairdresser,” had sex with many men.

A passage from Sanhedrin 106 gloats over the early age at which Jesus died:

“Hast thou heard how old Balaam (Jesus) was?–He replied: It is not actually stated but since it is written, Bloody & deceitful men shall not live out half their days it follows that he was thirty-three or thirty-four years old.”

The Truth about the Talmud