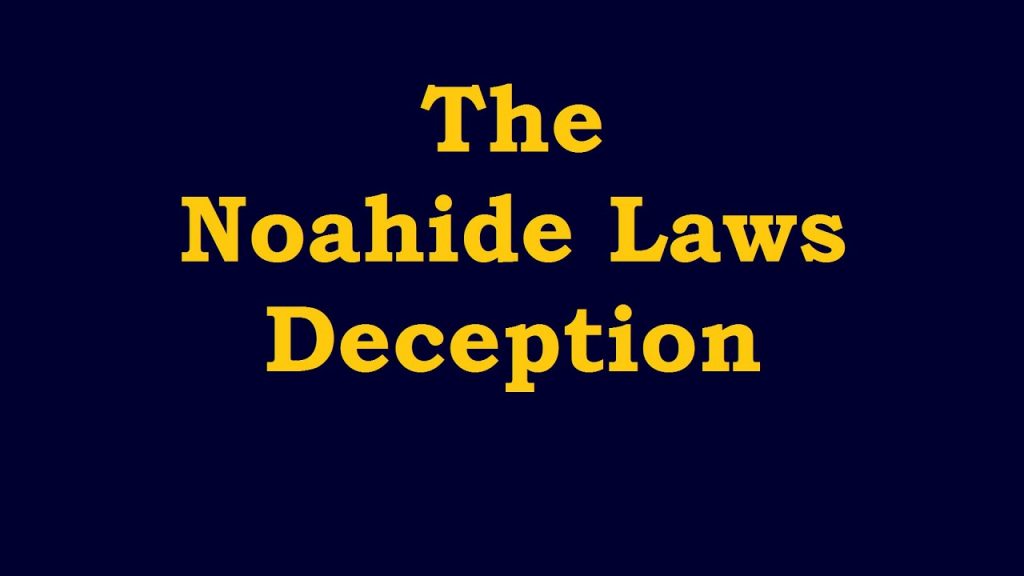 * UPDATED 4/13/19…REBUTTAL OF DR.BROWN MOCKING THOSE WHO TELL THE TRUTH ABOUT NOAHIDE LAWS *

I really don’t want to keep posting on the Noahide Laws in hopes that people will look into them on their own BUT, I had to share one more video on this. There is a grave deception being pushed on Christians who love Israel and the Jews. People who are exposing the Noahide Laws are being accused of being Anti-Semitic, Anti-Israel, or Replacement Theologists and that is a HUGE lie! Makes me so mad!!! I wish people would actually do their homework BEFORE they respond to people. It is deeply sad that Anti-Semitics or Israel haters do visit Steve’s site and other sites who talk about this issue because it does a major disservice to those who are actually telling you the truth. People will focus on what the ignorant are saying and just tune out what is actually being said and shown to them.

Nothing makes me more angry than for someone to tell me I am anti Jew or Israel. That is one topic that I struggle with in my flesh when trying to control my temper (Spanish / Irish here…the struggle is real…ha ha). The father gave me a deep, meaningful, Holy Spirit filled moment about the Jewish people and I felt the deep sadness God has for his people and know how much he loves them. No one can tell me otherwise! Please, people do your homework! As I said before, I do not agree with Steve on all things. I do not agree 100% with anyone for that matter. I like to think for myself and not have others tell me what to think. Share the information with me, I’ll look at it further and then share it for others to discern on their own as well. But, do not attack your sisters and brothers in Jesus by calling all people who expose certain truths as being Anti-Semitic or a Replacement Theologist! Are they out there? Absolutely they are! Do they comment or make a home at sites who share these truths? Yes, they absolutely do because Satan uses it as a tool to shut down the truth and to push those who don’t do their homework back into their comfy zone and ready them to attack their brethren to further push the truth down! We live in sick sad days and it is particularly sad that we as a body can not have civil discussions on ALL matters with out name slinging and hate! No wonder delusion will rule the day during the Tribulation, it is already taking center stage. Unless someone is telling you that Jesus is not the only way to the father then, all matters can be discussed and worked out in adult and civil manners. THAT is how we grow.

In any event, I am not concerned about these laws for us because, as a pre-trib rapture believer, I know we will not have to contend with this if in fact it does turn out to be part of the One World Religious system. HOWEVER, if someone visits my site who still has not committed themselves to Jesus yet but, will be blessed enough to survive in the Tribulation to be saved then, they will have this information in the back of their minds when they are pushed to the head of the line to take a mark or pledge to a false Anti-Christ.

KNOWINGLY making these Noahide Laws out to be docile or a non-issue is a deceitful thing in my opinion. Not all people who are saying this are knowingly doing that because they have not fully invested any homework into it. But, I think people should before they address the issue. It could be placing future souls at risk. The blinders will be removed and Jews and Gentiles alike will be saved during that 7 year time frame but, I think any future confusion that can be removed now would be most helpful. Here is the rebuttal to Mark Biltz on these Laws by Steve and Jana. Please, don’t just jump on bandwagons and go on attacks. Look into a matter. I pray this will be the last video on this that I share. Mainly due to us being raptured any day now! God bless and protect you all! And keep LOOKING UP! Jesus is coming for his body any day now!!

The only one I could find where they briefly address Mark Biltz (40-46mins mark). The one I had was removed but, this has tons of information still!

Galatians 3
By Faith, or by Works of the Law?

7 Know then that it is those of faith who are the sons of Abraham. 8 And the Scripture, foreseeing that God would justify the Gentiles by faith, preached the gospel beforehand to Abraham, saying, “In you shall all the nations be blessed.” 9 So then, those who are of faith are blessed along with Abraham, the man of faith.
The Righteous Shall Live by Faith

10 For all who rely on works of the law are under a curse; for it is written, “Cursed be everyone who does not abide by all things written in the Book of the Law, and do them.” 11 Now it is evident that no one is justified before God by the law, for “The righteous shall live by faith.” 12 But the law is not of faith, rather “The one who does them shall live by them.” 13 Christ redeemed us from the curse of the law by becoming a curse for us—for it is written, “Cursed is everyone who is hanged on a tree”— 14 so that in Christ Jesus the blessing of Abraham might come to the Gentiles, so that we might receive the promised Spirit through faith.

The Law and the Promise

15 To give a human example, brothers: even with a man-made covenant, no one annuls it or adds to it once it has been ratified. 16 Now the promises were made to Abraham and to his offspring. It does not say, “And to offsprings,” referring to many, but referring to one, “And to your offspring,” who is Christ. 17 This is what I mean: the law, which came 430 years afterward, does not annul a covenant previously ratified by God, so as to make the promise void. 18 For if the inheritance comes by the law, it no longer comes by promise; but God gave it to Abraham by a promise.

19 Why then the law? It was added because of transgressions, until the offspring should come to whom the promise had been made, and it was put in place through angels by an intermediary. 20 Now an intermediary implies more than one, but God is one.

21 Is the law then contrary to the promises of God? Certainly not! For if a law had been given that could give life, then righteousness would indeed be by the law. 22 But the Scripture imprisoned everything under sin, so that the promise by faith in Jesus Christ might be given to those who believe.

23 Now before faith came, we were held captive under the law, imprisoned until the coming faith would be revealed. 24 So then, the law was our guardian until Christ came, in order that we might be justified by faith. 25 But now that faith has come, we are no longer under a guardian, 26 for in Christ Jesus you are all sons of God, through faith. 27 For as many of you as were baptized into Christ have put on Christ. 28 There is neither Jew nor Greek, there is neither slave nor free, there is no male and female, for you are all one in Christ Jesus. 29 And if you are Christ’s, then you are Abraham’s offspring, heirs according to promise.

Two great books to revisit or read if you haven’t yet:

The Creator's Name Speaks!
Therefore Encourage One Another With These Words: Rapture Dream 2020
"So That No One Can Buy Or Sell Unless He Has The Mark.."
Once It Starts, It Is Unstoppable and Irrevocable