Summer Is Near! He Who Gathers In The Summer Is A Wise Son! 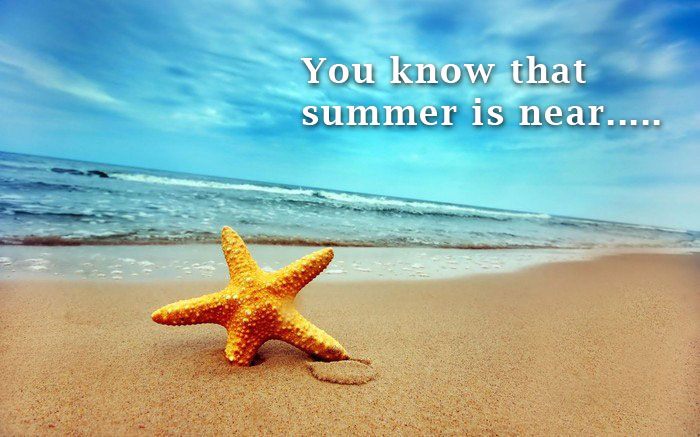 He that gathereth in summer is a wise son: but he that sleepeth in harvest is a son that causeth shame. ~ Proverbs 10:5

Are we, the church, about to be gathered by the wise son???

“From the fig tree learn its lesson: as soon as its branch becomes tender and puts out its leaves, you know that summer is near.  So also, when you see all these things, you know that he is near, at the very gates. Truly, I say to you, this generation will not pass away until all these things take place.  Heaven and earth will pass away, but my words will not pass away. ~ Matthew 24:32-35

How ’bout some super cool speculating?? Pastor Robert Breaker has an awesome teaching for this month of June!! Could we be very close to the rapture??? Especially with God beginning to work with the nation of Israel again. DISCLAIMER: This video does NOT attempt to set the date of the rapture. Rather, in light of recent events, it only ASKS the question: Could it be soon???

So let us wake up! Because….

…concerning the times and the seasons, brothers, you have no need to have anything written to you. For you yourselves are fully aware that the day of the Lord will come like a thief in the night. While people are saying, “There is peace and security,” then sudden destruction will come upon them as labor pains come upon a pregnant woman, and they will not escape. But you are not in darkness, brothers, for that day to surprise you like a thief. For you are all children of light, children of the day. We are not of the night or of the darkness. So then let us not sleep, as others do, but let us keep awake and be sober. For those who sleep, sleep at night, and those who get drunk, are drunk at night. But since we belong to the day, let us be sober, having put on the breastplate of faith and love, and for a helmet the hope of salvation. For God has not destined us for wrath, but to obtain salvation through our Lord Jesus Christ,  who died for us so that whether we are awake or asleep we might live with him.  Therefore encourage one another and build one another up, just as you are doing. ~ 1 Thessalonians 5:1-11

Concerning Israel and God turning his eyes towards her again after the church is removed….

O Lord, in distress they sought you;
they poured out a whispered prayer
when your discipline was upon them.

Like a pregnant woman
who writhes and cries out in her pangs
when she is near to giving birth,
so were we because of you, O Lord;
we were pregnant, we writhed,
but we have given birth to wind.

We have accomplished no deliverance in the earth,
and the inhabitants of the world have not fallen.

{Now back to the church & Rapture imagery}

Your dead shall live; their bodies shall rise.
You who dwell in the dust, awake and sing for joy!
For your dew is a dew of light,
and the earth will give birth to the dead.

Come, my people, enter your chambers,
and shut your doors behind you;
hide yourselves for a little while
until the indignation has passed by.

For behold, the Lord is coming out from his place
to punish the inhabitants of the earth for their iniquity,
and the earth will disclose the blood shed on it,
and will no more cover its slain.

The angel who watches over Israel will then stand because the time of Jacob’s Trouble has come…..

“At that time shall arise Michael, the great prince who has charge of your people. And there shall be a time of trouble, such as never has been since there was a nation till that time. But at that time your people shall be delivered, everyone whose name shall be found written in the book. And many of those who sleep in the dust of the earth shall awake, some to everlasting life, and some to shame and everlasting contempt. And those who are wise shall shine like the brightness of the sky above; and those who turn many to righteousness, like the stars forever and ever. But you, Daniel, shut up the words and seal the book, until the time of the end. Many shall run to and fro, and knowledge shall increase.” ~ Daniel 12:1-4

I think the book has now been opened and we are in the time of the end…..What if is it this June??? Don’t be left behind in the time of Jacob’s Trouble known as the Tribulation. Be saved now, today!! This is what Israel and those who accept salvation in Jesus AFTER the rapture will say:

Woe is me! For I have become
as when the summer fruit has been gathered,
as when the grapes have been gleaned:
there is no cluster to eat,
no first-ripe fig that my soul desires.

The godly has perished from the earth,
and there is no one upright among mankind;
they all lie in wait for blood,
and each hunts the other with a net.

Their hands are on what is evil, to do it well;
the prince and the judge ask for a bribe,
and the great man utters the evil desire of his soul;
thus they weave it together.

The best of them is like a brier,
the most upright of them a thorn hedge.
The day of your watchmen, of your punishment, has come;
now their confusion is at hand.

Put no trust in a neighbor;
have no confidence in a friend;
guard the doors of your mouth
from her who lies in your arms;

But as for me, I will look to the Lord;
I will wait for the God of my salvation;
my God will hear me.

Rejoice not over me, O my enemy;
when I fall, I shall rise;
when I sit in darkness,
the Lord will be a light to me.

I will bear the indignation of the Lord
because I have sinned against him,
until he pleads my cause
and executes judgment for me.
He will bring me out to the light;
I shall look upon his vindication.

Bonus video of interest…Steve at Blessed Hope 2018 has been on a similar journey with his watch. Here is his latest video about the number 271 and conception/birth:

A facebook friend of mine does Bible codes and he just shared this tonight! Pretty cool!

“The Lord has blessed me with some Bible code tables about the rapture of the Body of Christ, and what I believe to be the correct timing of it, the season of Shavuot/Pentecost. I’m simply going to present strong evidence using only the Bible and the codes within it. Each one of them testifies to the other, so it may be best to keep them all together so you can study them and compare. This is the second table with the feast of weeks. The reoccurring theme points to the Menorah/Lampstand and specifically the middle of it.”

Proverbs 10:5 Proverbs 10:5 He that gathereth in summer is a wise son: but he that sleepeth in harvest is a son that causeth shame.

Code interpretation: The feast of weeks, behold, the Father’s Menorah/Lampstand! And the blameless, He caught up. How did you write all these words? It will be prophesied from God.” ~ Sean M. @ Facebook page: Bible Codes Unsealed

“Returning to Mt. Sinai” A Call for Climate Justice and Ceremony of "Repentance"...
Prepare For The Spring Wedding?
Buckle Up Friends...Part 2
ConCERNing things about CERN (