Society Is Witnessing Yet Another Scapegoat Ritual 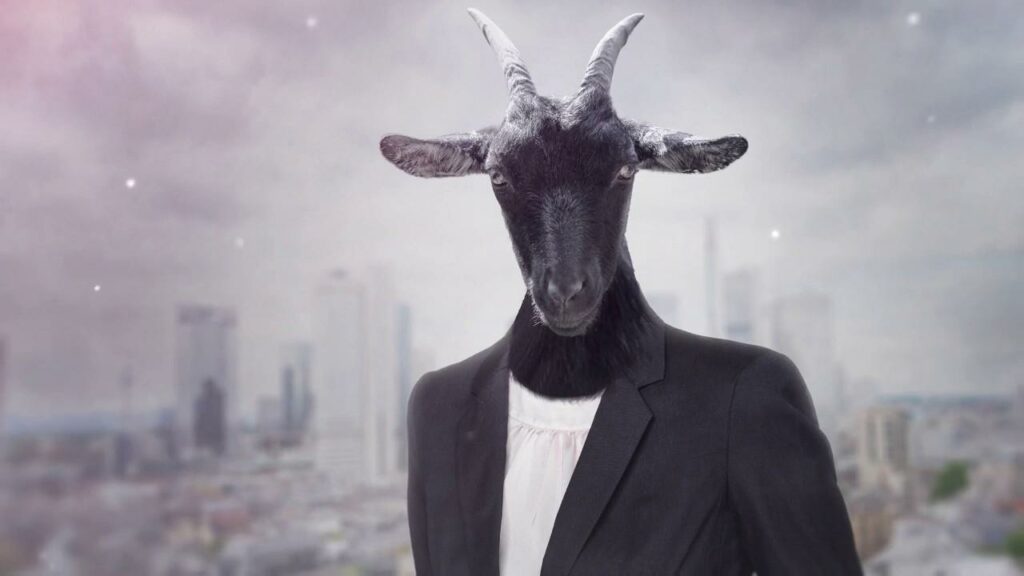 Ok, this one is going to be heavy. If you are not wanting to be weighted down then come back to it later or skip it all together. Below is a video I am sharing along with some links that relate to what you will see. The video is only about 11 mins long. Basically, it’s just the same old (small g) “gods”/demons programming the public’s minds eye to accept their ways. All of the perversions we see GROWING in front of our eyes today are all part of the set up for the coming Antichrist system. These “powers that be” are becoming more and more blatant with their plan. God will put an end to it all and judge them severely at the appointed time. After as many who will come to him will. He is patient in that he wants no one to perish. He gives us free choice to pick him over the evil (temporary) powers that be but sadly, people still continue to not choose wisely.

Isaiah 3:11
Woe to the wicked! It shall be ill with him, for what his hands have dealt out shall be done to him.

Isaiah 5:20
Woe to those who call evil good and good evil, who put darkness for light and light for darkness, who put bitter for sweet and sweet for bitter!

Here is the Truth Stream Media Site for other articles and links to their videos.

These links below are ties to some of the images and things you see in the video.

Ties to tongues sticking out: 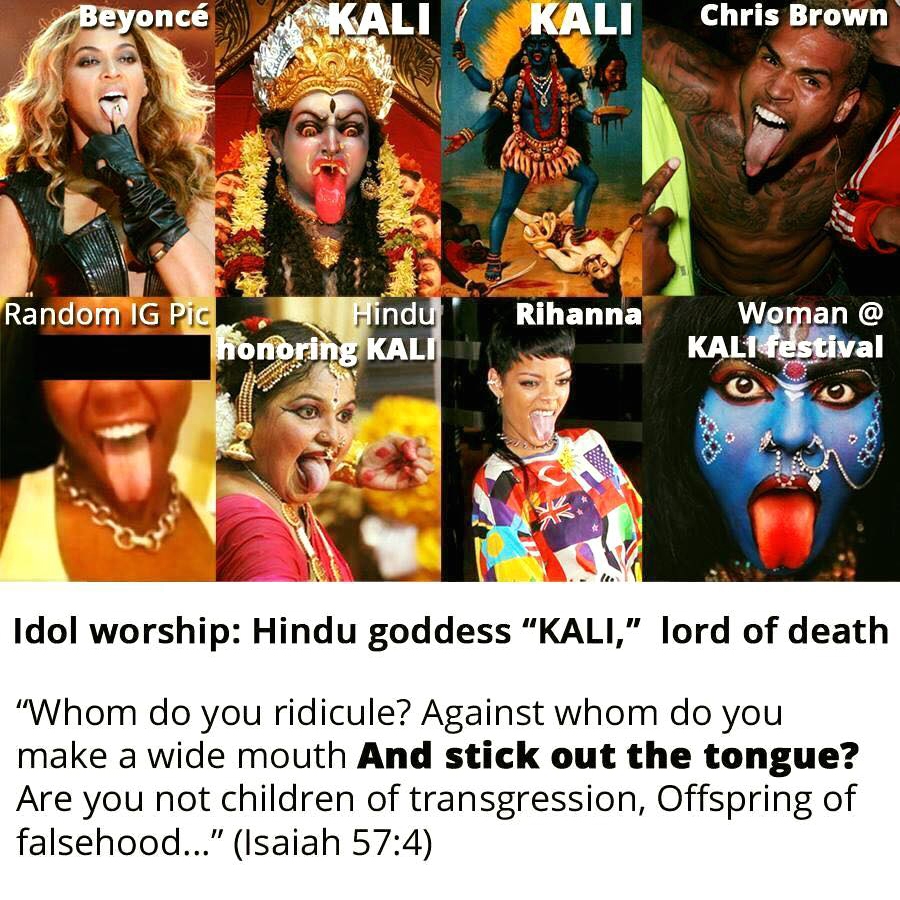 Scroll down to: TONGUE (protruding): Linked to flame, fire, fertility, sexual power and spiritual power. In nations around the world, images of deities or masks with protruding tongues have indicated active and occupying spiritual forces — often a union of masculine and feminine spirits. Such images were vital to pagan rituals invoking [demonic] spirits. The sexual/spiritual forces represented by gargoyles with protruding tongues which adorned Gothic cathedrals were believed to protect the buildings from other spiritual powers: OCCULT SYMBOLS and their Meaning 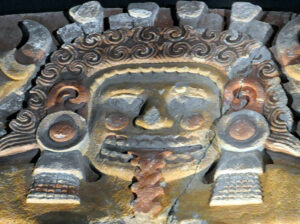 Tlaltecuhtli was commonly depicted by the Aztecs with his/her tongue out as a sign of his/her thirst for human blood – the archetypal Mexica deity that could both nourish life and take it away – and of course many now believe that it is Tlaltecuhtli’s face that is shown in the centre of the Sunstone. What comes from the deity’s mouth, in the great stone monolith discovered only recently in central Mexico City (and now on display in the Templo Mayor Museum – photo above), is more than just a tongue – it is a steady flow of blood, ‘a powerful visual representation of Tlaltecuhtli’s devouring role, and a symbol of the divine link between human sacrifice and providing sustenance [food] to the Aztecs’ gods.’: Aztecs at Mexicolore 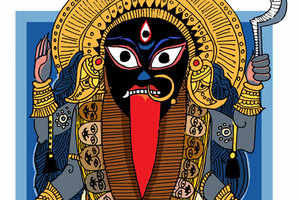 In popular story-telling, the reason for Kali sticking out her tongue is rather domestic. After killing the demon Daruka, Kali drank his blood. The blood drove her mad with bloodlust. She went around the world killing at random. The gods begged Shiva to stop her. So he took the form of a handsome man and lay in Kali’s path. As soon as Kali stepped on him, she bit her tongue out of embarrassment. She was ashamed to learn that her bloodlust had prevented her from seeing and recognising her own husband. Needless to say, this is considered a patriarchal interpretation that became popular in the 19th century.

In Kali temples, the tongue is smeared with the blood of sacrificed animals — a reminder that Mother Nature is — ‘red in tooth and claw’, giving life as well as taking life. We may domesticate her, transform her into the demure Gauri, clothed and coy, but she will always stick out her tongue and slurp on our blood.

Perhaps with the outstretched tongue, Kali teases and mocks her devotees — she sees through their social facade and knows the dark desires they try so hard to deny or suppress.: Times Of India 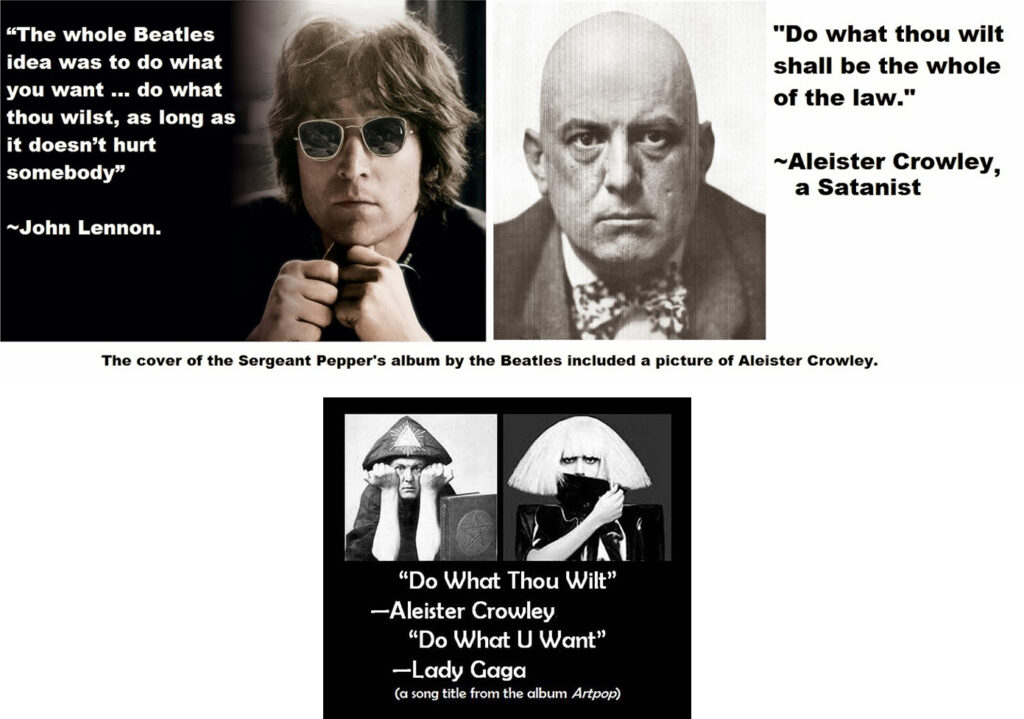 “To us Victoria was sheer suffocation… We could not see, we could not breathe…The Soul of England was stagnant, stupefied!”[14] He said elsewhere: “I say today: To hell with Christianity…I will build me a new Heaven and a new Earth…I want blasphemy, murder, rape, revolution, anything bad…”[15]

In order to have “blasphemy, murder, rape, revolution,” and “anything bad,” Crowley immerse himself in Hermeticism, Freemasonry, Rosicrusianism, and Kabbalah. Those occult and secret societies attracted “prominent artists, poets, and intellectuals, including W. B. Yeats.”[16] Furthermore, all those occult movements are the grandchild of Jewish magic.[17] In fact, one of the noted Kabbalists who had a tremendously profound influence on the Golden Dawn and indeed Crowley was none other than Eliphas Levi.[18] One scholar writes:

“Cowley’s enthusiasm for Levi as a ceremonial magician was so pronounced that the controversial British occultist claimed to be a reincarnation of the French sage. It was Eliphas Levi who had first proposed the symbolic connection between the Major Arcana of the Tarot and the letters of the Hebrew alphabet…

“S. L. MacGregor Mathers, co-founder of the Golden Dawn, accepted Levi’s proposal that because the paths linking the ten sephiroth on the Kabbalistic tree of Life were associated with specific Hebrew letters, the Major Arcana linked to these Hebrew letters could be used to gain meditative access to paths on the Tree.

“Mathers’s Golden Dawn colleague, A. E. Waite also praised Levi for emphasizing the importance of the ‘magical will.’”[19]… More at link

Because of Crowley’s sexual rituals, drug consumption and dabblings in Black Magick (he introduced the letter “k” at the end of “magic” to differentiate it from the entertainment kind) , Crowley was maligned and heavily criticized by the press during his lifetime. However, declassified documents have since revealed that the “Great Beast 666″ led a double life: Crowley apparently maintained ties with the British Government and worked with the British intelligence and high-ranking members of the American Government. The O.T.O.–the secret society he popularized–held within its ranks some of the most influential people of the time, who in turn used their power to further the advancement of its main philosophy: the Thelema… More at link

In light of the Epstien news and Pizzagate and spirit cooking etc….

Aleister Crowley — Initiated to the highest levels of Freemasonry and high priest of the Golden Dawn, said:
“A white male child of perfect innocence and intelligence makes the most suitable victim.”..More at link

PLEASE keep in mind that not all Jews follow Talmud or are religious even. It is only the ultra religious Sanhedrin / Pharisee sects that Jesus spoke out against in the Bible. There are also several types of religious Jews just as there are several types of Christian denominations. Not all agree on all aspects. Please do not allow hate or turn against a people group after learning these things below. Also keep in mind that some of the people who are trapped in this system have been indoctrinated from a very young age and it is hard to break free from it without the truth of Jesus and God’s guiding Holy Spirit. But, we know per prophecy, that there will be those who see the truth and finally believe in Jesus as messiah and God will never forsake his promises or covenants. : 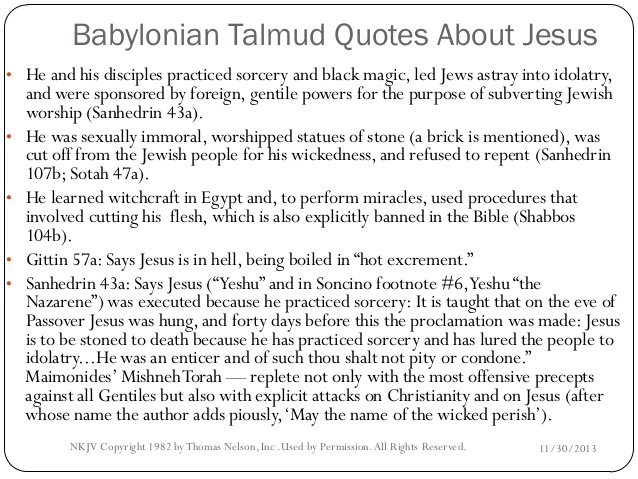 Occultist embrace Kabbalah….This is mysticism and not approved by God at all. This is one main reason why Jesus comes against them and their teachings and tries to teach them the truth instead but, only a remnant would listen to Jesus. The Babylonian Talmud Allows Sex with 3-year Old Girls and sadly makes allowances for other horrific sins as well.

A bit more about the Babylonian Talmud:

*For Christian Truthers and or Replacement Theologists… A mere nutshell response… 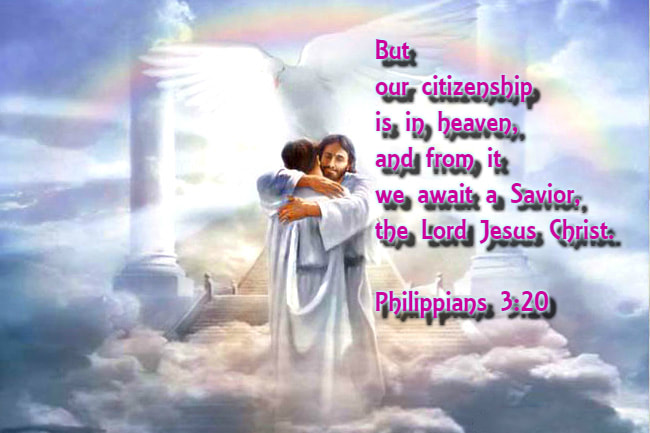 Philippians 3
Finally, my brothers, rejoice in the Lord. To write the same things to you is no trouble to me and is safe for you.

2 Look out for the dogs, look out for the evildoers, look out for those who mutilate the flesh. 3 For we are the circumcision, who worship by the Spirit of God and glory in Christ Jesus and put no confidence in the flesh— 4 though I myself have reason for confidence in the flesh also. If anyone else thinks he has reason for confidence in the flesh, I have more: 5 circumcised on the eighth day, of the people of Israel, of the tribe of Benjamin, a Hebrew of Hebrews; as to the law, a Pharisee; 6 as to zeal, a persecutor of the church; as to righteousness under the law, blameless. 7 But whatever gain I had, I counted as loss for the sake of Christ. 8 Indeed, I count everything as loss because of the surpassing worth of knowing Christ Jesus my Lord. For his sake I have suffered the loss of all things and count them as rubbish, in order that I may gain Christ 9 and be found in him, not having a righteousness of my own that comes from the law, but that which comes through faith in Christ, the righteousness from God that depends on faith— 10 that I may know him and the power of his resurrection, and may share his sufferings, becoming like him in his death, 11 that by any means possible I may attain the resurrection from the dead.

12 Not that I have already obtained this or am already perfect, but I press on to make it my own, because Christ Jesus has made me his own. 13 Brothers, I do not consider that I have made it my own. But one thing I do: forgetting what lies behind and straining forward to what lies ahead, 14 I press on toward the goal for the prize of the upward call of God in Christ Jesus. 15 Let those of us who are mature think this way, and if in anything you think otherwise, God will reveal that also to you. 16 Only let us hold true to what we have attained.

17 Brothers, join in imitating me, and keep your eyes on those who walk according to the example you have in us. 18 For many, of whom I have often told you and now tell you even with tears, walk as enemies of the cross of Christ. 19 Their end is destruction, their god is their belly, and they glory in their shame, with minds set on earthly things. 20 But our citizenship is in heaven, and from it we await a Savior, the Lord Jesus Christ, 21 who will transform our lowly body to be like his glorious body, by the power that enables him even to subject all things to himself.

The Christmas Star: The Birth, History, and Wise Men
More Events That SHOULD Make Us Realize That These ARE The Last Days. If Anyone ...
Who's Down With TPP? Yeah, Not Me
The Venus/Jupiter Conjunction Connection