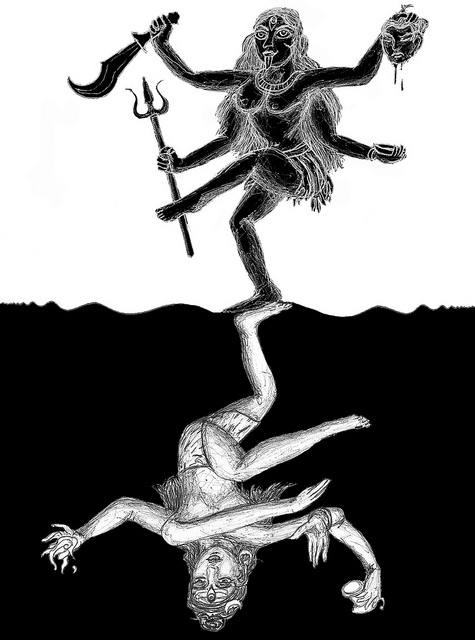 This depiction of Kali dancing on top of her husband Shiva represents the duality, symmetry/synchronicity of As above so Below quite well. It’s encompasses they theory the occult elites embrace and push.

First, a little background. Shiva, Kali, Synchronicity / Symmetry, duality, as above so below, order out of chaos, Hermentics, Freemasonry, Gnosticism, Theosophy, sacred geometry, CERN, and the New World Order are related to these days of the End times. That is why we are seeing so much symbolism via movies and from entertainers who are being handled and prompted to throw up symbols or even resorting to sex changes to push the idea (Miley Cyrus sticking her stupid tongue out constantly in photo ops like Kali and Bruce Jenner making the headlines are just two examples). These things help to shape the masses consciousness to accept the coming deception whether you believe it or not. Thankfully Jesus will come back after the 7yrs of Tribulation (or Jacobs trouble) to put a stop to the distorted truth and lies of the fallen angels who pose as gods (or “aliens from other galaxies” and “ascended masters etc.”) to be worshiped via making up various false religions for each set of gods in order to garner that worship. The whole of my blog postings help bring the picture into our real time view but really all one needs to do is just crack open the Bible and read. It is ALL in there.

As we all know, if you have been following it in the news or my blog posts, CERN uses Shiva and Kali respectively to represent what the main goal with the Hadron Collider is…

First, a clip from the highlighted link below on Shiva’s relation the way CERN uses:
“The depiction of Shiva as Nataraja (Sanskrit: naṭarāja, “Lord of Dance”) is popular. The names Nartaka (“dancer”) and Nityanarta (“eternal dancer”) appear in the Shiva Sahasranama. His association with dance and also with music is prominent in the Puranic period. In addition to the specific iconographic form known as Nataraja, various other types of dancing forms (Sanskrit: nṛtyamūrti) are found in all parts of India, with many well-defined varieties in Tamil Nadu in particular. The two most common forms of the dance are the Tandava, which later came to denote the powerful and masculine dance as Kala-Mahakala associated with the destruction of the world. When it requires the world or universe to be destroyed, Lord Śiva does it by the tāṇḍavanṛtya. and Lasya, which is graceful and delicate and expresses emotions on a gentle level and is considered the feminine dance attributed to the goddess Parvati. Lasya is regarded as the female counterpart of Tandava. The Tandava-Lasya dances are associated with the destruction-creation of the world.

Now in relation to Kali:
“The Tantric interpretation of Kali standing on top of her husband is as follows: The Shiv tattava (Divine Consciousness as Shiva) is inactive, while the Shakti tattava (Divine Energy as Kali) is active. Shiva and Kali represent Brahman, the Absolute pure consciousness which is beyond all names, forms and activities. Kali, on the other hand, represents the potential (and manifested) energy responsible for all names, forms and activities. She is his Shakti, or creative power, and is seen as the substance behind the entire content of all consciousness. She can never exist apart from Shiva or act independently of him, just as Shiva remains a mere corpse without Kali i.e., Shakti, all the matter/energy of the universe, is not distinct from Shiva, or Brahman, but is rather the dynamic power of Brahman.[46] Hence, Kali is Para Brahman in the feminine and dynamic aspect while Shiva is the male aspect and static. She stands as the absolute basis for all life, energy and beneath her feet lies, Shiva, a metaphor for mass, which cannot retain its form without energy.”

It is said of Kali and Shiva that “they fulfill the highest Supreme together, like the obverse and the reverse of the same coin. Shiva is silent and Kali is active and dynamic. If we see with our ordinary human eyes, then we say that they are separate. But with our inner eye if we see them, we see that they are together.” And that “the entire cosmic reality is represented by the dance of Kali (time) upon the changeless all pervading consciousness, Shiva.”

The occult elite, who have the dream of a new Golden Age here on Earth for their past “gods” or, in reality fallen angels who rebelled with Satan against the ONE TRUE GOD, believe in and push these concepts of  synchronicity / Symmetry, duality, as above so below, order out of chaos, Hermentics, Freemasonry, Gnosticism, sacred geometry. They have a goal to release those fallen entities back onto the earth again and to allow for their fake savior the Antichrist (Appollyon among other various names) who will actually be Satan, to take the reigns of the New World Order…The New Babylon. They will create destruction and chaos so that they can come back in and re-create the Utopia they so desire to live in with their “gods”. They fail to realize that if it were to actually succeed, which it won’t per God’s word, that most of them will lose their value and be consumed by the so called “gods” they worship. Anyone left would be used as slaves along with any remnants of society. Thank Jesus that will not be that case!

Please view my postings about CERN and the September one just in case something is in fact coming next month however, as Tim Clark of Endtimes News Matrix mentioned today, they really are pointing to September a lot so perhaps it’s a psyop instead? Never hurts to be aware and prepared for anything though…Only time will tell us…Wake up to the signs around you! GET SAVED if you are not because time is of the essence!! I’d do it today and not put it off but that’s just me. Or is it?

There are reasons they do these things….

This one below is another new video of conditioning I have seen…The intro is from the maker of the video:
“This video incorporates 4 trailers from both seasons 1 and 2 of The Leftovers. Season 1 of The Leftovers makes a clear switch of the clock from 9:44 a.m. to 9:24 p.m. Season 2 references 926 on a sign, as it shows what appears to be thousands of people stranded in the barren desert as they try to make their way to a “miracle” town. In the background, you hear a man on the radio talking about the land with milk and honey AFTER the rapture has already happened. The Land of Milk and Honey is the Promised Land and is tied in with the Jubilee Year (the setting free of the slaves/prisoners). In one of the clips, I couldn’t tell if the voice was singing, “when worlds collide” or “when walls collide.” I assumed it was “worlds” (since this makes sense). Also, please forgive me for the language and sensual scenes in these trailers. I tried to cut out as much of this as possible, but had to keep a little to illustrate my points. Blessings to you all!”

Through Hell’s Gates for those Left Behind (September 2015): Grace Period is Over

As above so below.…A twisted version of the one true God’s true word. We are to pray for God’s kingdom to be here on this Earth as it is in Heaven. The fallen one and his cohorts twist it into the concept of As above so below. They twist and lie so we are to be wise as serpents and harmless as doves so as not to be fooled. God says his people are destroyed for lack of knowledge so be awake, aware, and study your BIBLE for the TRUTH! Synchronicity is part of the philosophy of Hermeticism or Gnosticism in Theosophy and the New Age. It is the religion of the New World Order and the UN’s religion of choice as well as Freemasonry (even though Freemasonry pushes the lie of “you can choose your own God etc..It’s a lie, they worship Lucifer whether they realize it or not) Synchronicity is behind CERN as well. These things all come together to point to what the environment will be like for those left behind during the Tribulation.

This is not new but, I found this extremely interesting and key in relation…

Matthew 10:16 ~
Behold, I send you forth as sheep in the midst of wolves: be ye therefore wise as serpents, and harmless as doves.

Hosea 4:6 ~
My people are destroyed for lack of knowledge…

Just in case, here are a couple of news articles found at the time of this posting….See links for reports:

NEW DELHI: In a breathtaking spectacle, Goddess Kali was projected on the Empire State Building in New York.

Artist Andrew Jones designed the portrait of the goddess to make the point that Mother Nature now more than ever needs a fierce avatar to fight the dangers of pollution and extinction, Firstpost.com reported.

Earlier images of endangered species, including Cecil the lion, were also projected on the iconic building….More at link

She is the Goddess of time, change, power, and destruction. She is the destroyer of evil forces. She was in America’s melting pot, New York!.

The very busy citizens of the ‘Big Apple’ stood mesmerised when Goddess Kali made an appearance on the façade of the iconic Empire State building….MORE at link