See You In September… 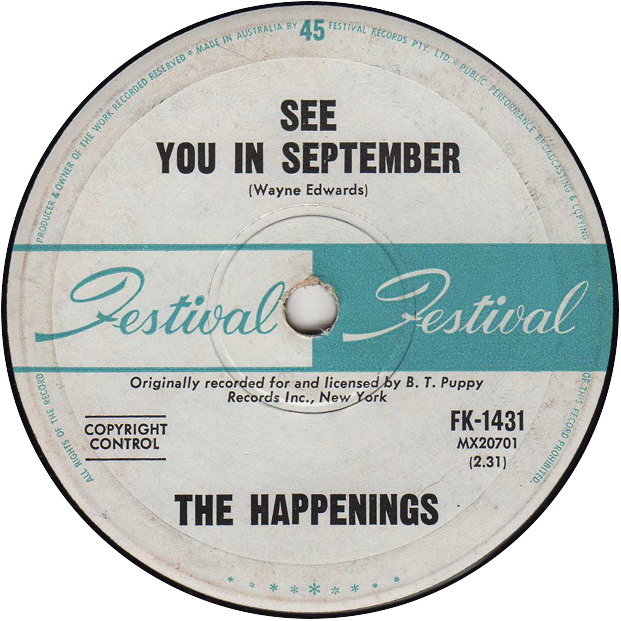 ** Note: click on feature pic above to hear the tune **

This is a newer updated version of the post I made back in 2015 when September was front and center as a watch time.

Much speculation is surrounding September for some major happenings again. Back in 2015 September was in the limelight and of course nothing serious happened. But, I have often wondered and still wonder if perhaps the research had the date right but not the year? I had a ton of videos to show on my original September post but they have all been deleted by the video makers because the date passed. I think that is unfortunate because most were still relevant just not year specific. Obviously 9-23 has something tied to it. The occult seem to think so and the entertainment industry over the years for some reason. Perhaps the occult are interested in it because they think it a sign of their own god coming forth and the removal of us pesky Christians? Both the the pop culture entertainment world (including the elite/Illuminati few who produce entertainment for ritual and conditioning of the masses) as well as the Christian watchmen world (those who have been following the events of the end times issues in search of the nearness of the time of Jesus’ return and Rapture of the church) are focused on this time frame again. The Christian world mainly because of the Revelation 12 sign that I have posted about in other posts. These three specifically:The Sky Don’t Lie…A MUST Read!,  They’re Coming Baaaaack (CERN, Revelation 12, Black Cube Saturn Worship and More), and Excellent Must Read…The Coming UFO Disclosure.

Just a short briefing: The Spring feast of Pentecost is one high Rapture watch time along with Rosh Hashanah a fall Rapture watch time. I now watch all possible dates as well as these feast days of Rosh Hashanah and Pentecost. We can know the season (Fig Tree Generation) just not the exact date. The fall watch of Rosh Hashanah (also known as “The Day that no man knows” Falls on Sept 21rst -23rd this year) comes under the premise that Jesus fulfilled the first three feast days that happen in the spring time and will now fulfill the next three feast days which occur in the fall. Most of the fall watch watchmen agree with the timeline as this: Rosh Hashanah or Feast of Trumpets (rapture Meet Jesus in the air), Yom Kippur or Day of Atonement (Jesus comes back to Earth physically the 2nd time and separates the sheep from the goats. He allows his followers, the sheep, who were saved during the 7yr Tribulation to remain in the Earthly kingdom and sends the goats or those who turned their backs on him and joined the fight with Satan to hell with the fallen angels, Antichrist and false prophet.), and finally Tabernacles (The kingdom with Jesus reigning and ruling on Earth and tabernacle with his people for 1000yrs until one last and final stand of Satan that ends in his eternal demise and a brand new eternity for all those who belong to the Lord. Those who remain after Tribulation on the Earth live on the Earth and those who were raptured live in the New Jerusalem at this time).

I had provided a few videos that showcased the fact that 9-23 was singled out by the elite in films and other venues but, as I had mentioned most all of those had been removed. I’m sure if you type in the titles you may find some out there still that reveal 9-23 being brought to forefront in some form or fashion. Just a few of them are listed below. One video below has a short compilation of a few. You can do a search yourself on Youtube and find others. Here is a list of some: Evan Almighty, Little Shop of Horrors, Knowing, Ghost Busters, Sleepy Hollow, Red Riding Hood, Tomorrow Land, JeruZalem, Deep Impact, Volcano, Left Behind, Gone Girl, Seeking a Friend for the End of the World, The Number 23, This is the END, Run all Night, Pixels Movie, 3rd Rock from the Sun, Lost, NCIS (Last Man Standing), Gorillaz 19-2000 music video, “Wake me up when September Ends” Taco Bell ad… etc. All make a point to pinpoint the September date 9-22/23. TV shows & movies should not dictate what or how we believe ONLY God’s word should however, I am in fact interested in the date always managing to find a way in these programs and the span of time that they have been doing it. As speculative as it is there are just too many cases for them to be coincidence. It is pretty dang intriguing as to why they point it out. On a side note, throughout my blog posts on CERN there are other videos that point to the September dates as well.

I can tell you this, the end times events are in full swing and this year, just as 2015, still points to huge events to begin that could start the Tribulation. The Rapture could very well be one of those huge events. We are to be looking for Jesus to return everyday and expecting it. We are commanded to know the times. I say this September is as good a date as any and if not then any day afterwards still. This bubble is about to burst wide open and we all can feel it saved and unsaved alike.

I say be prepared and the only valid way to do that is to be SAVED! Do not put it off any longer because it is not 20 or 10yrs off even. Look up because our redemption is drawing neigh. I know this because Jesus told us what signs there would be to prompt us to start looking up and those signs have been presented and then some. {See Luke 21 and keep this in mind Genesis 1:14-16 ~ 14 And God said, “Let there be lights in the expanse of the heavens to separate the day from the night. And let them be for signs and for seasons, and for days and years, 15 and let them be lights in the expanse of the heavens to give light upon the earth.” And it was so. 16 And God made the two great lights—the greater light to rule the day and the lesser light to rule the night—and the stars.}

Tell Jesus you believe him and what he did for you by sacrificing himself for you on the cross. Ask Jesus to forgive you your sins and change your heart and to come into your life now! Tomorrow is no guarantee and when we die we do not end. We are spiritual beings who exist eternally. The only choice is where you want to spend that eternity, in prison of hell or in freedom and a heavenly kingdom with Jesus. If I were you, I’d choose wisely, but that’s just me, or is it?

A few things of interest going on during that time frame of 2015 that are still interesting to ponder today in 2017:

For 2017..Besides Scott Clarke’s site here is a great site and great article that also has two of the videos below:

An Alignment Of Alignments And The Question Of Coincidence

Evan Almighty (2007) Predicts Date of the Sign of Revelation 12

Sept 22/23 Hidden message in the movies