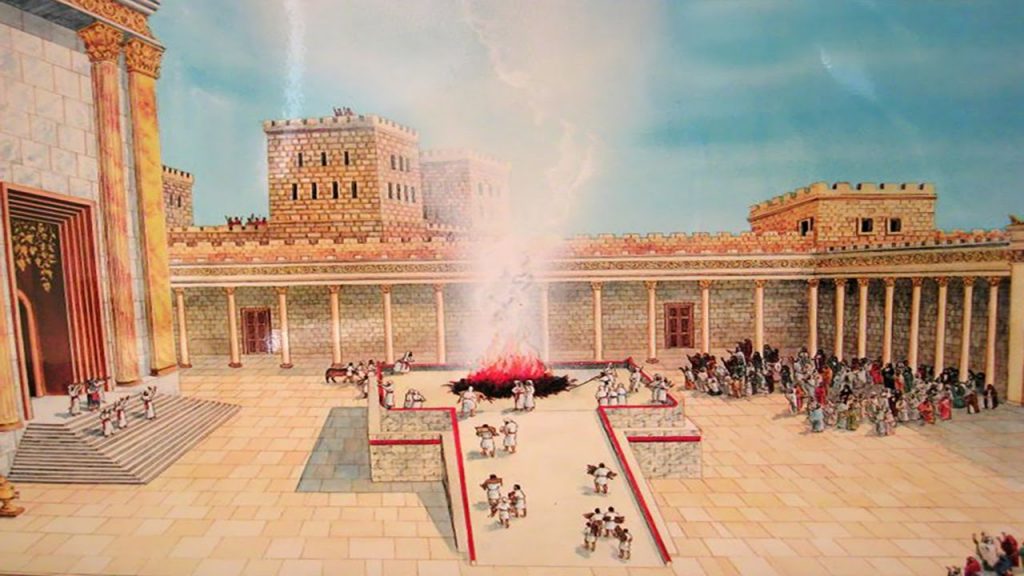 R$S did another video today. I just watched the Sanhedrin Passover sacrifice being done today, April 15, 2019. They practiced on a goat. I’ll post the video below. The key part is when the Cohenen priest is talking towards the end of the video. LISTEN carefully to what he is saying and then go learn of the Noahide laws. You can start with the recent posts I made on them HERE!

Bear in mind that after they get the 3rd Temple set up then mid way through the Antichrist will stop the sacrifices and claim to be God himself…THEN they (The Jews) will know…Pray for the blinders to be removed (the blindness will start to end after the rapture happens) Christians also need to wake up!

Antichrist verse….
Daniel 9:27 ~
And he shall make a strong covenant with many for one week, and for half of the week he shall put an end to sacrifice and offering. And on the wing of abominations shall come one who makes desolate, until the decreed end is poured out on the desolator.”

It is also KEY that you do not buy into hating the Jews! Please remember that God DOES HAVE an everlasting covenant with them and they WILL get all the land back. Remember that when Jesus was being brutally beaten and while he was on the cross he did not rail against them or scream hate towards them or tell others to hate them.

Luke 23:33-35 ~ And when they came to the place that is called The Skull, there they crucified him, and the criminals, one on his right and one on his left. 34 And Jesus said, “Father, forgive them, for they know not what they do.”And they cast lots to divide his garments. 35 And the people stood by, watching, but the rulers scoffed at him, saying, “He saved others; let him save himself, if he is the Christ of God, his Chosen One!”

When Stephen was being stoned to death for his witness to Jesus and his spreading of the good news of the Gospel he did not rail against the Jews and spew hate. He did not try to rally others to hate them.

Instead, he said this:

Acts 7:58-60 ~ Then they cast him out of the city and stoned him. And the witnesses laid down their garments at the feet of a young man named Saul. 59 And as they were stoning Stephen, he called out, “Lord Jesus, receive my spirit.” 60 And falling to his knees he cried out with a loud voice, “Lord, do not hold this sin against them.” And when he had said this, he fell asleep (died).

We MUST pray for the peace of Jerusalem and we MUST pray for the Jewish people to open their eyes and hearts to receive the TRUE Passover lamb, JESUS. Do not hate. Hate the evil behind the New World order occult elites that is operating with the powers that be. Hate the evil of the principalities in the spiritual realm who are against God and Jesus. But, we must separate that from the people because, the people (some Christians included) are being deceived. Pray for the blinders to be removed and LOVE them instead. Hate the evil behind it but love the person who can not help the state of deception they are in. GOD will separate the wheat from the tares NOT US! In love, many will see the truth and finally accept Jesus as Messiah. Love leads people to Jesus not hate. Love can be a hard thing to do when you are being beaten down but it is the bravest and the best testimony of what God is truly all about. While he was cursed at and denied he sent his only son to take on the punishment for ALL who will accept his sacrifice. I know there is evil going on behind the scenes but let us not allow it to make us stop loving a people being deceived so that they will come to Jesus instead. Our prayers and love will help aid the the 144,000 to preach the Gospel during those 7 years of Jacob’s Trouble. Many will be saved during that time and many many many Jews will come out of the darkness. Focus on that when we are learning about the Noahide Laws. Focus on that in our end times watch for Jesus’ return.

Matthew 26:57-67
Jesus Before Caiaphas and the Council

57 Then those who had seized Jesus led him to Caiaphas the high priest, where the scribes and the elders had gathered. 58 And Peter was following him at a distance, as far as the courtyard of the high priest, and going inside he sat with the guards to see the end. 59 Now the chief priests and the whole council were seeking false testimony against Jesus that they might put him to death, 60 but they found none, though many false witnesses came forward. At last two came forward 61 and said, “This man said, ‘I am able to destroy the temple of God, and to rebuild it in three days.’” 62 And the high priest stood up and said, “Have you no answer to make? What is it that these men testify against you?” 63 But Jesus remained silent. And the high priest said to him, “I adjure you by the living God, tell us if you are the Christ, the Son of God.” 64 Jesus said to him, “You have said so. But I tell you, from now on you will see the Son of Man seated at the right hand of Power and coming on the clouds of heaven.” 65 Then the high priest tore his robes and said, “He has uttered blasphemy. What further witnesses do we need? You have now heard his blasphemy. 66 What is your judgment?” They answered, “He deserves death.” 67 Then they spit in his face and struck him. And some slapped him…

Any one who worships Jesus will be considered an idolator and per the Talmud they are to be killed or decapitated….Don’t stay here for the Tribulation….Accept Jesus TODAY…A hard time is coming when God is turning the hearts of the Jews back to him. They will have to learn a hard hard lesson. During that time called The Time of Jacob’s Trouble the whole world will be under judgement! Accept salvation TODAY!! It is coming!!

* UPDATED THIS TODAY 4/15/19…After seeing Many Fish’s video today, I found it even more interesting that they sacrificed a goat today in light of the Notre Dame Cathedral fire and I,Pet Goat II:  Didja know this yet? I, petgoat II: CERN as a Portal *

Trump And A Flying Fig Newton
World News Briefing ~ News You Are Not Getting In The Main Stream!
2020 Rapture: It's not over by a long shot. It's even gotten Better! It's possib...
Holocaust Remembrance Day