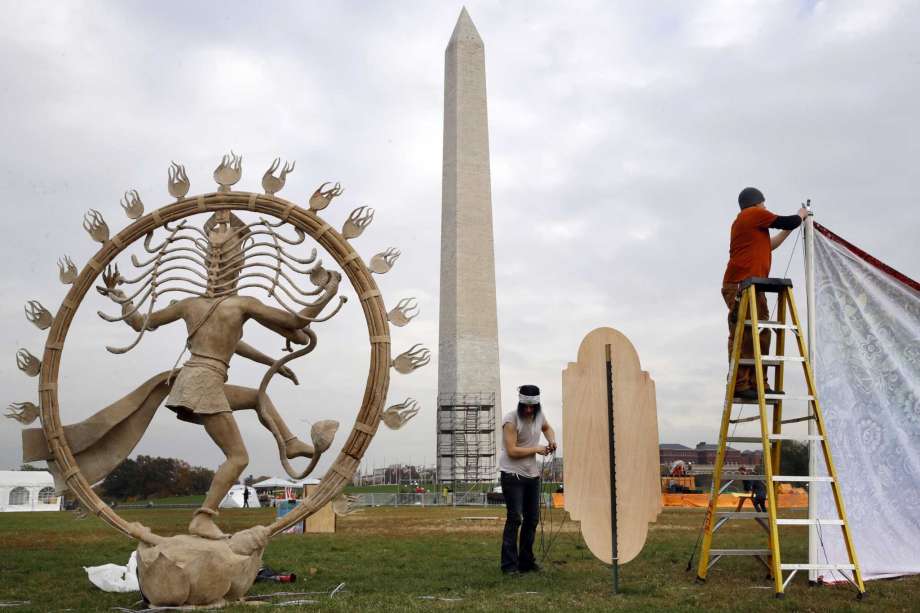 Jaye Brotherton of Jamestown, Colo., center, and Ben Harper, right, work on installation of the “Nataraja” artwork for Catharsis on the Mall, Thursday, Nov. 9, 2017, an event that plans to bring a taste of Burning Man to the National Mall in Washington. The “Nataraja” was a part of last year’s TransFOAMation Camp at Burning Man. The Catharsis on the Mall event begins Friday afternoon and continues through Sunday with round-the-clock, seminars and performances in tents, stages and camps built near the foot of the Washington Monument. Photo: Jacquelyn Martin, AP

This weekend there will be a 70ft long, fire-breathing Red Dragon from Burning Man called Abraxas, named after a demon, coming to Washington D.C. Also, notice in the AP image above that they put up the Nataraja (Shiva) last year that CERN displays as well. When you think CERN you always think of Shiva as Nataraja because they made sure they are tied together. ** Click link for story right below **

This is about bringing forth Antichrist (which in these people’s eyes and Gnostics is their savior). Most have no idea what is going on and brush this off as some weirdo hippy dippy art display or just art. It is not. It is much more than that. There are two sides in this war we have been in the middle of. Good (God/Jesus) and bad (Satan/Fallen angels who joined forces with Satan). We live behind enemy lines. These people worship their god Satan and the fallen angels and are doing what they can to help bring them forth. They will be on this Earth during the tribulation along with Satan who will incarnate the Antichrist. Between this and all the Baal gates they have been “resurrected” there is some major uptick of evil spiritual ritual going on to do this. Don’t fall for the deception. The delusion. Do not believe the lie.

2 Thessalonians 2:5-12 ~
Do you not remember that when I was still with you I told you these things? 6 And you know what is restraining him now so that he may be revealed in his time. 7 For the mystery of lawlessness is already at work. Only he who now restrains it will do so until he is out of the way. {Note by me: After the Rapture the Holy Spirit will not restrain this any longer} 8 And then the lawless one will be revealed, whom the Lord Jesus will kill with the breath of his mouth and bring to nothing by the appearance of his coming. 9 The coming of the lawless one is by the activity of Satan with all power and false signs and wonders, 10 and with all wicked deception for those who are perishing, because they refused to love the truth and so be saved. 11 Therefore God sends them a strong delusion, so that they may believe what is false, 12 in order that all may be condemned who did not believe the truth but had pleasure in unrighteousness.

Here are the organizers own words:
_
“There’s a deeply spiritual side to what we’re trying to do,” said Adam Eidinger, a local activist who has helped organize Catharsis events in Washington for the past three years. “Having sacred fire on the mall is a very religious thing.”

The massive metal dragon, known as Abraxas, is itself a Burning Man veteran and will roll through the streets around the Capitol during a protest march at dawn Sunday. On Saturday night, a small wooden temple will be set ablaze under the close eye of fire marshals. 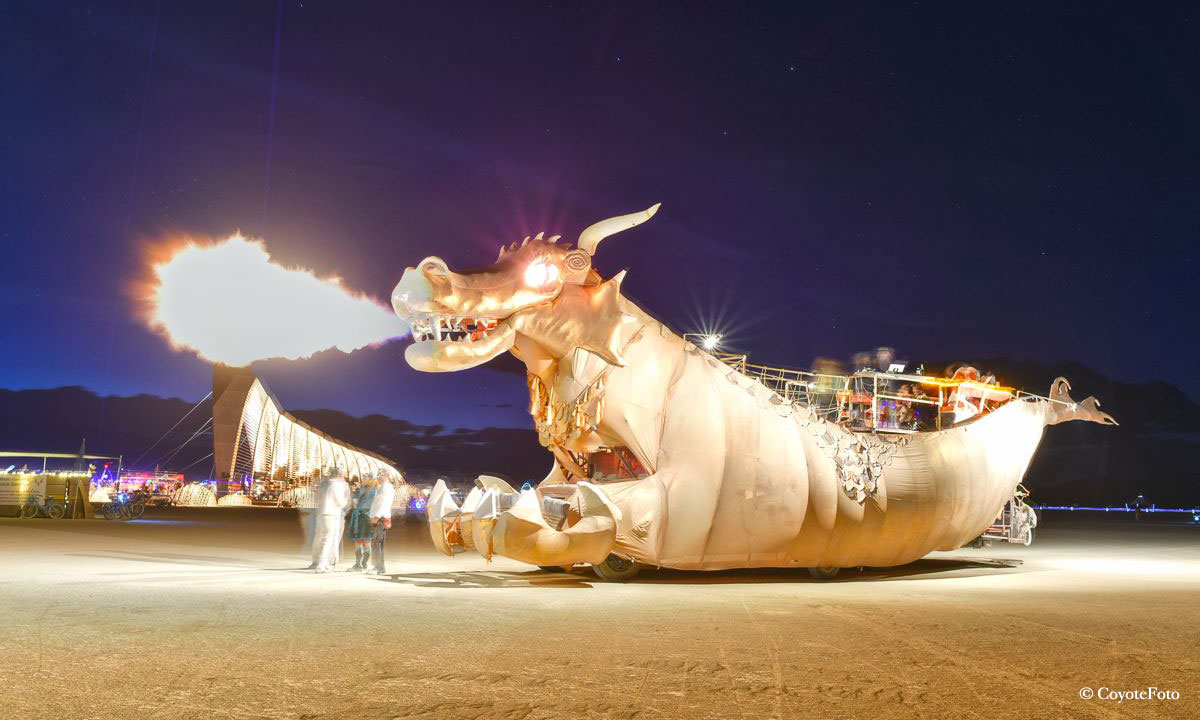 As an Archon
In the system described by Irenaeus, “the Unbegotten Father” is the progenitor of Nous, and from Nous Logos, from Logos Phronesis, from Phronesis Sophia and Dynamis, from Sophia and Dynamis principalities, powers, and angels, the last of whom create “the first heaven.” They in turn originate a second series, who create a second heaven. The process continues in like manner until 365 heavens are in existence, the angels of the last or visible heaven being the authors of our world.[2] “The ruler” [principem, i.e., probably ton archonta] of the 365 heavens “is Abraxas, and for this reason he contains within himself 365 numbers.”

The name occurs in the Refutation of all Heresies (vii. 26) by Hippolytus, who appears in these chapters to have followed the Exegetica of Basilides. After describing the manifestation of the Gospel in the Ogdoad and Hebdomad, he adds that the Basilidians have a long account of the innumerable creations and powers in the several ‘stages’ of the upper world (diastemata), in which they speak of 365 heavens and say that “their great archon” is Abrasax, because his name contains the number 365, the number of the days in the year; i.e. the sum of the numbers denoted by the Greek letters in ΑΒΡΑΣΑΞ according to the rules of isopsephy is 365:

As a god
Epiphanius (Haer. 69, 73 f.) appears to follow partly Irenaeus, partly the lost Compendium of Hippolytus.[5] He designates Abraxas more distinctly as “the power above all, and First Principle,” “the cause and first archetype” of all things; and mentions that the Basilidians referred to 365 as the number of parts (mele) in the human body, as well as of days in the year.

The author of the appendix to Tertullian De Praescr. Haer. (c. 4), who likewise follows Hippolytus’s Compendium,[6] adds some further particulars; that ‘Abraxas’ gave birth to Mind (nous), the first in the series of primary powers enumerated likewise by Irenaeus and Epiphanius; that the world, as well as the 365 heavens, was created in honour of ‘Abraxas;’ and that Christ was sent not by the Maker of the world but by ‘Abraxas.’

It is evident from these particulars that Abrasax was the name of the first of the 365 Archons, and accordingly stood below Sophia and Dynamis and their progenitors; but his position is not expressly stated, so that the writer of the supplement to Tertullian had some excuse for confusing him with “the Supreme God.”

As an Aeon
With the availability of primary sources, such as those in the Nag Hammadi library, the identity of Abrasax remains unclear. The Holy Book of the Great Invisible Spirit, for instance, refers to Abrasax as an Aeon dwelling with Sophia and other Aeons of the Pleroma Dukias in the light of the luminary Eleleth. In several texts, the luminary Eleleth is the last of the luminaries (Spiritual Lights) that come forward, and it is the Aeon Sophia, associated with Eleleth, who encounters darkness and becomes involved in the chain of events that leads to the Demiurge’s rule of this world, and the salvage effort that ensues. As such, the role of Aeons of Eleleth, including Abraxas, Sophia, and others, pertains to this outer border of the Pleroma that encounters the ignorance of the world of Lack and interacts to rectify the error of ignorance in the world of materiality.

Some insight into Gnosticism:

“…The Gnostics were essentially a “sect, most likely beginning in the second century, which largely viewed the material world as evil and considered the knowledge of hidden things as the only route to salvation”. However, scholars approach the Gnostic Gospels (GG) and documents with caution, especially when they provide alleged historical narratives on the historical Jesus. There are several persuasive reasons as to why this is the case.

Firstly, the works that they penned are quite late having been written between the 2nd and 4th centuries AD. That allows much time for embellishment and motive to rework the original New Testament narratives..

..The point being is that none of the people whose names are given actually wrote these texts; this is known as pseudepigrapha. For example, it is just not possible for, say, Judas to have written the Gospel of Judas because by the time the Gospel of Judas was actually written (towards the end of the 2nd century) he would have long been dead..

..In short, the Gnostic Gospels were written hundreds of years after the eyewitnesses of Jesus had already died, offer no new verifiable historical insights, and twist the original of the disciples to fit a Gnostic agenda. They are therefore not reliable as historical documents.”

Read the details here: Why We Shouldn’t Trust The Gnostic Gospels

Search Results for: gnosticism at Amos37

Some past blog posts on the Baal Gates as well as another pertinent post:

* Temple Of Baal Are Being Displayed In The Colosseum In Rome

* The Temple Of Baal And Gateways Coming?

The post “So This Happened” includes a breakdown of the Dance of Destruction in the movie put out by CERN called Symmetry. Well, remember the short “artsy” film I Pet Goat? Same thing. Same concept. They have plans and they are implementing them under our very noses. These occult people are following their god Lucifer and the fallen angels who are teaching them and showing them what to do so that they can break on through and rule. God will allow this for the 7yr Tribulation time and then he will put an end to it. There are more who will turn to Jesus and be saved during this time so he allows it to wait on those who will have faith in him and so be saved. That said, if you combine what you just learned about Abraxas above via the wiki link and the other resources above, you will see what all this “art” is all about. They are working to bring their god Antichrist and the Fallen Angels to this Earth to reign and rule. (Some think they will come as alien brothers..Don’t believe the lies!) Now watch this short video of the Cern dance and I pet Goat combined. It will become crystal clear. {On a side note I had watched the I Pet Goat several times before and noticed towards the end how the pyramid gets demolished and wondered about that. It stands out in light of the recent news of the secret cavern they found recently in the Giza Pyramid. Just another Hmmmmm thing to ponder.}

I decided that the bonus will be Dr. Michael Heiser and Dr. Ken Johnson would be better suited to learn more on Gnosticism. Here are a few videos to listen to below.

Gnostics twist the truth and make good evil and evil good. God said this: “20 Woe to those who call evil good and good evil, who put darkness for light and light for darkness, who put bitter for sweet and sweet for bitter! 21 Woe to those who are wise in their own eyes, and shrewd in their own sight!” ~ Isaiah 5:20-21. We know the truth is God’s word and JESUS. They are deceived we are not. Hold on to truth in Jesus but learn so you are not deceived. I encourage you to re-visit the links about Gnosticism above and this: Gnosticism Exposed Gnostic Gospels

“Behold, I am sending you out as sheep in the midst of wolves, so be wise as serpents and innocent as doves. ~ Jesus ~ Matthew 10:16

Introduction to Gnostic theology and cosmology

The Demonic Gospels – Ken Johnson on the Gnostic Gospels

And the Word became flesh (JESUS) and dwelt among us, and we have seen his glory, glory as of the only Son from the Father, full of grace and truth. ~ John 1:14

For the law was given through Moses; grace and truth came through Jesus Christ. ~ John 1:17

But the word that is written in their Law must be fulfilled: ‘They hated me (JESUS) without a cause.’ 26 “But when the Helper comes, whom I will send to you from the Father, the Spirit of truth (The Holy Spirit which when the rapture happens will no longer restrain the evil it is restraining right now and then the Antichrist will be able to be revealed), who proceeds from the Father, he will bear witness about me (JESUS). ~ John 15:25-26