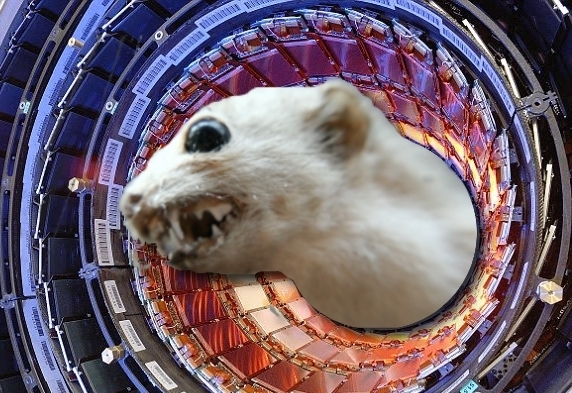 You know the old song, Pop Goes The Weasel? Well, Pop went the LHC (CERN) after a small animal they believe to be a weasel chewed on some wires…Ha ha ha, you really CAN’T make these things up. Hilarious but not for the poor weasel. I just keep thinking of the poor cat in the movie Christmas Vacation…lol.

Although they should be getting the ol’ LHC up and operating in no time it is still pretty interestingly amusing. Here below is the Multiverse champ himself, Josh Peck’s blog posting on it below. Good stuff there at his blog. Check out his other latest one on Edgar Casey as well his others. Have a great weekend and May the one true God bless you all!

LHC, World’s Most Powerful Machine, Broken and Shut Down … by a Weasel!

You just can’t make this stuff up. As it turns out, the rumors are true. A small mammal, hypothesized to be a weasel, has taken the LHC offline. After a power outage, investigating engineers found the charred remains of what appeared to be a weasel, though exact classification of the animal’s species is yet to be determined conclusively. An official CERN briefing document states the animal may have been a marten. Apparently, the small, furry creature had chewed through a power cable.

Arnaud Marsollier, head of press for CERN, stated “We had electrical problems, and we are pretty sure this was caused by a small animal.” At the time of the shutdown, the LHC was attempting to prepare to collect new data on the elusive Higgs Boson particle. It has also been reported that CERN has seen some hints of possible new and undiscovered…MORE at HIGHLIGHTED LINK above or HERE

CERN have made 300 Terabytes of data available for the public to dissect and wade through. On their own website, CERN says that they are digitally reconstructing the data retrieved over the course of the last few years. Given the fact that the LHC can create brief black holes, and with the recent news that black holes are portals into alternate realities, is it possible that the digital reconstruction will yield a virtual reality that we did not create? Such a possibility would confirm alternate realities, accessible through the virtual platform. And is it possible that the reason why Jesus will have to bring about a New Heaven and New Earth is because these openings will cause great chaos for creation? ~ Face Like The Sun

About 1hr 40mins in on this video below David Carrico addresses what he discovers about the weasel and he and Timothy Alberino discuss it…Very interesting!!