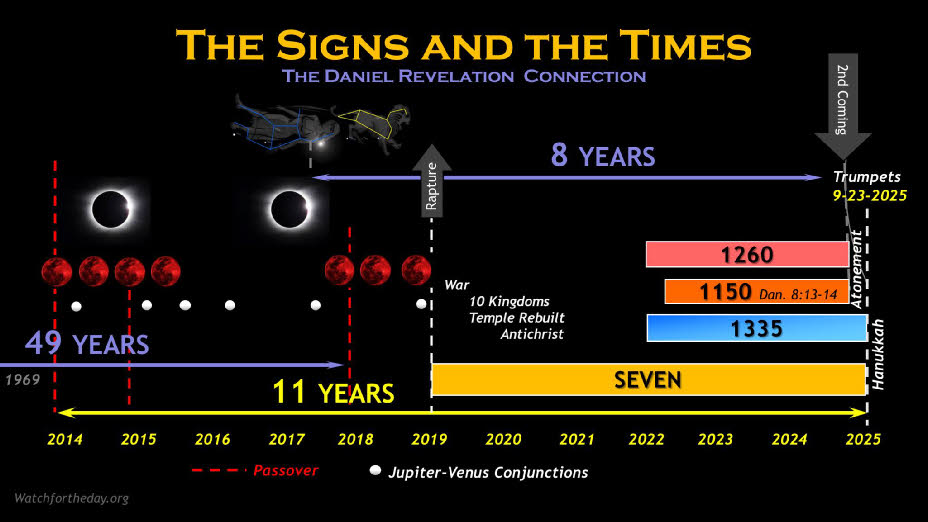 Scroll to the Relevant Links below to read the article that goes along with this chart by Daniel Matson. “The 70th Week Scenarios”

The watching community are focusing on a high watch time for this month of March on the 20th through the 22nd. I’m actually tacking on until April after the Israeli elections and the set time that they have to reveal the Trump / Kushner “Deal of The Century” peace plan. So let us be on alert and watch! I have a friend named John on a social media account who posted what I am going to share below just to give you some things to ponder, look into and, pray on. He just nut-shelled some things and provided a bunch of links to consider. Now, keep in mind the wording he uses here. He says and is clear by saying “THIS MIGHT BE IT“. He does not say this is it for sure. As I have covered before, we are watching and SPECULATING in excitement for Jesus’ return. Not naming for sure dates. We are on watch ALL the time but on high watch during certain times. Now here is what John put together today…I edited some things because I am sharing some of the same video links under this…

The Passover is when the blood of an innocent Passover lamb saved the firstborn of Israel from death in the Exodus. Later in our history the Messiah became a Passover Lamb when His innocent blood was shed to take away the sins of the world.

At the Egyptian Passover, the Lamb was kept until Day 14 of Month 1 and was slain “between the evenings” sometime between sunset and dark as Day 14 of Month 1 was beginning (Exodus 12:6). The Levitical Priesthood kept the Passover in this way until the end of the Second Temple Period. The commemorative Seder begins after sundown beginning Day 14 of Month 1 (21-Mar at sundown).

Also, 50 years ago on Passover Eve an act was passed by the Knesset on April 1, 1969, Nisan 14, as recorded by H. Paul Jeffers to restore and rebuild Jerusalem.

“Israel’s answer to UN objections to what it was doing came on April 1, 1969 with a vote by the Knesset “to bring the Jewish Quarter to life again and dignify it as a national, religions, and cultural center, stressing its special characteristics and quality.” The ‘act’ created “The Company for the Reconstruction and Development of the Jewish Quarter of Jerusalem.” – H. Paul Jeffers.

Another prophetic fulfillment of Daniel 9:25?

Daniel 9:25
Know therefore and understand, that from the going forth of the commandment to restore and to build Jerusalem unto the Messiah the Prince shall be seven weeks, and threescore and two weeks: the street shall be built again, and the wall, even in troublous times.

Captives are set free on a Jubilee, at every 50th year.

Daniel’s prophecy that predicts the arrival of the Messiah SEEMS to converge with Passover 2019.

Will the covenant be confirmed?

Daniel 9:27
And he shall confirm the covenant with many for one week: and in the midst of the week he shall cause the sacrifice and the oblation to cease, and for the overspreading of abominations he shall make it desolate, even until the consummation, and that determined shall be poured upon the desolate.

*The US Earthquake Prediction was based off of a 2011 reporting of Putin’s scientists predicting a massive earthquake to strike the US with the two weeks of the report. The re-circulation of this fake news is intriguing because it is such an odd thing to drag out and draw attention to during this time frame again. Barry, in his video below, visits that thought himself. What purpose would it serve other than to distract people? Or, (tin foil hat on 😉 ) perhaps it was an old plan that Russia would try to strike the US back in 2011 but it was put off until now? That is mere and total speculation obviously however, it is crazy they they float this false news back out there after eight years. So stay alert in any event.*

Don’t miss this one! Brad over at Revelation 12 Daily has this awesome link: New Stuff from Paul and Lyn! It’s has one of Paul Dawson’s videos on Passover and an awesome link to Lyn Melvin’s blog post which is a must read!!! Go check that out!

Also, please take the time to read these articles by the late Jack Kelley from Grace Thru Faith. They are excellent. The first is Esther’s story. It tells about her and Purim and reveals hidden meanings with in them. It is four parts but they are not super long at all and are very easy reads. Also, read the Passover links as well.

Rapture 2019: Purim or Passover in March, Which is it?

Be encouraged! But, most importantly BE SAVED! You do not want to be left here for the 7 years of Jabco’s Trouble! You would be wise to choose Jesus’ salvation for you TODAY! He paid the price for all of our sins. He took them all on himself so that we all could be perfected in him and live for all eternity with him! Please don’t put it off!

How To Get To Heaven (click image or here)

Here's The Real Truth About The Jews!
Trump And A Flying Fig Newton
Will It Be This Year? Who Knows? But, It Is SOON!
Fallen Angels, UFOs, Aliens, Demons and The New World Order