Paris Is Burning & The Hegelian Dialect 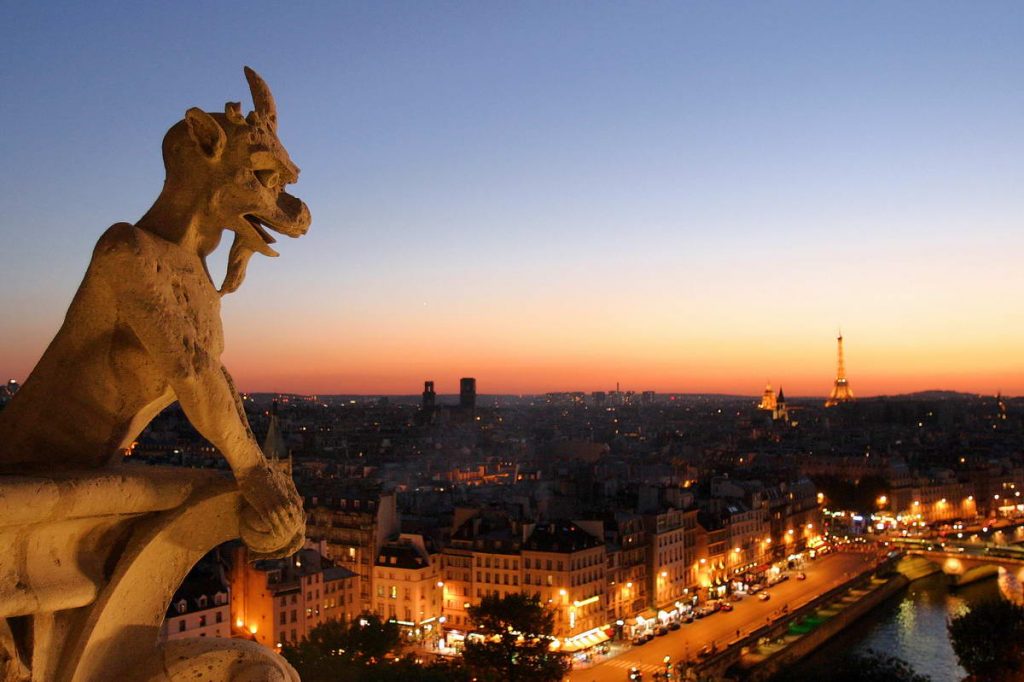 Here is an excellent write up by Pete Garcia and its highlighted link to The Omega Letter below. Also, learn about The Hegelian Dialect. It is used on the world populace on a regular basis….

I am putting my series of the Chronicles of Eternity on hold for a week, in order to address what transpired in Paris last Friday and what it means for us today. Having spent previous articles on the Hegelian Dialectic and the fact that Satan currently controls the narrative and maneuverings here on earth, I can’t help but see the angle he is using for the continued barbarism of Islam.

I believe he is using Islamic terror as a forcing mechanism to nudge the general global population toward given up their liberty and nationalism. We saw this in the aftermath of 9/11 when the Congress overwhelmingly supported voting in the Patriot Act. We also know that in the final seven years of mankind on earth, that one man (the Antichrist) will come to rule the entire planet absolutely. So starting out at the beginning, we see that;

As described in Daniel 2, the multi-metallic statue of Nebuchadnezzar’s Dream:
d) Babylon (Head of gold)
e) Medo-Persia (Should of silver)
f) Greece (Waist of brass)
g) Rome (Legs of iron)

h) European nations (or offshoots) of Europe which rose and fell

Discovered by the Nordic and Spanish
Settled and claimed by the English, Spanish, and French

2. Final one world government called the Beast, and headed by the Antichrist and the False Prophet…which is yet to be formed (Rev. 13, 17).

Although hardly a complete list, nations have been jockeying for power throughout the world for the last 4,000 years. We’ve seen enough kingdoms rise and fall with enough repetition, that it could be only be deemed a tragic comedy. Currently, we (the U.S.) is in the death throes of our own makings, due in large part to the very same things that have destroyed previous empires; political corruption, unrecoverable national debt, loss of cultural identity, and public ignorance/apathy. Of note, is that since 1900, more and more political, military, economic power has been increasingly consolidated into fewer and fewer hands.

Those who are promoting the satanic plan of a one world system, use issues such as Islamic terrorism to force the general public to cry out for more peace and security. The problem then is that this world’s version of peace and security, always comes at the cost of personal liberty. In past generations, this enhanced protection, was very manpower and resource intensive. But now through advanced technology, monitoring and controlling a population has never been easier.

The significance of Israel in the times we find ourselves in, is that Israel serves as God’s time-piece. Israel is the only nation, God ever had a covenant with, and in so doing, has made certain irrevocable promises that He cannot renege on or risk violating His own Word. (Gen. 12:1-3, 15; Deut. 30:3-5; Jer. 31:31-40, 33:14-26; Ezekiel 36-37) Furthermore, God has set aside 490 years (Daniel 9:24-27) specifically for the Jewish people and Jerusalem, that covers the time from their Babylonian captivity to the Second Coming of Jesus Christ at Armageddon. To date, 483 years have been completed with the death their Messiah, Jesus Christ.

We know that according to Scripture, two of the last three wars fought against Israel come primarily from Muslim nations:

Psalm 83 War/Isaiah 17; if this is a war, then it consists primarily of the Sunni-Muslim neighbors that immediately surround the nation of Israel.
Ezekiel 38-39; Gog and Magog War consists of a coalition of nations who are a mix of Sunni and Shia Muslims (with Russia being the only non-Muslim participant)
Armageddon; all nations come against Israel

Remember, that Satan knows that Israel places a central role in Bible Prophecy, for they are the clock that God is using to mark the end of his rule. This is why Satan hates Israel so much, and has stirred up so much irrational hatred towards her and is turning the world against even her very existence as a nation.

Prior to WWI, the Zionist Movement began to make some traction at the first Zionist Congress in Basel, Switzerland in 1897. From there, until the outset of WWI, there was 17 years. WWI concluded in 1918 with the defeat of the Central Powers who were; Austria-Hungary, Germany, and the Ottoman Turks. From there until World War II, there was 21 years (1939). WWII was the National Socialists (Nazis) attempt to not only reinstitute the greatness of the former German Empire, but picked up and began to capitalize on the growing anti-Semitism that had been fomenting in Europe for several decades. Three years after the ending of WWII, Israel declared its nationhood on a single day (May 14th, 1948) and has been in a perpetual state of war ever since. The list below outlines the terrorist and national attacks on Israel since then;

Not listed due to sheer numbers, is the terrorist attacks against Jews and Israel, but if you’re inclined, you can go here and see for yourself.

It should be noted, that the reason for the uptick in Islamic terrorism, which is spilling out against everyone (including other Muslims), is the fact that Israel is back in her land as a nation. Satan is pouring out his fury against this tiny nation by stirring up an ocean of hatred against her and anyone aligned with her, because he knows what Israel represents. What transpired in Paris this past Friday, or with; Charlie Hebdo, Colorado, Ft. Hood, Mumbai, Bali, London, Madrid, New York City, Washington, Pennsylvania, Kenya, or a hundred other places Islamists have struck, are merely symptoms of the underlying masterplan Satan has enacted. In true Hegelian Dialectic fashion, his plan is to destabilize the planet to the point that the world is crying out for peace and security. But this peace and security, will come in the form of a satanically energized man, who will seemingly have all the answers to the problems which ails the world.

Counter to this, is either God’s promise of protection and fortune, or the removal thereof, which also factor into these horrendous attacks. Of note, is the fact that God NEVER rescinded His promise to Abraham, Isaac (Gen. 26), and Jacob (Gen. 28). This is stated in Genesis 12:2-3 of which the subsequent promises were simply reiterations thereof;

“I will make you a great nation;
I will bless you
And make your name great;
And you shall be a blessing.
I will bless those who bless you,
And I will curse him who curses you;
And in you all the families of the earth shall be blessed.”

Yet, it is not only Israel who Satan hates, but the Church also. He knows that at a point very soon, Christ is going to return for His Church and proceed to call us up to meet Him in the very center of the stronghold that Satan currently inhabits…which is the atmosphere above the earth. This is why Satan is called in Ephesians 2, ‘the prince of the power of the air’. Thus, with a ‘shout’, the Lord will descend out of the Heavenly domain into our realm of existence and march His bride straight through the heart of enemy territory. (John 14:1-3; 1 Thess. 4:13-18; 1 Cor. 15:51-55) This is also why out of all the Eschatological positions in Christianity, the Pre-Tribulation Rapture position is the most hated.

The dilemma that Satan faces though, is that every time he stirs up man to persecute the Church, the Church flourishes because of the outpouring of the Holy Spirit. At this point in time though, he realizes that he doesn’t have much time left and is exacting his vengeance upon the Bride of Christ will he still can. He knows that at the Rapture of the Church, he will be displaced out of heaven and his access will be cut off. I’m also of the impression that Satan knows Bible prophecy better than most of us do, and knows this age of the Church is coming to close. So Satan will continue to use Islam, Communism, Atheism, Paganism, and every other ism he can use to exact his fury on both Israel and the Church while he can. Any attack aside from those two targets, are simply tools he is using to drive man to beg for peace and security. The fact that the violence, wickedness, and general lawlessness has been ramped up so quickly and so intensely, can only mean one thing…

But concerning the times and the seasons, brethren, you have no need that I should write to you. For you yourselves know perfectly that the day of the Lord so comes as a thief in the night. For when they say, “Peace and safety!” then sudden destruction comes upon them, as labor pains upon a pregnant woman. And they shall not escape. But you, brethren, are not in darkness, so that this Day should overtake you as a thief. You are all sons of light and sons of the day. We are not of the night nor of darkness. Therefore let us not sleep, as others do, but let us watch and be sober. For those who sleep, sleep at night, and those who get drunk are drunk at night. But let us who are of the day be sober, putting on the breastplate of faith and love, and as a helmet the hope of salvation. For God did not appoint us to wrath, but to obtain salvation through our Lord Jesus Christ, who died for us, that whether we wake or sleep, we should live together with Him. 1 Thess. 5:1-10 NKJV

The Paris bombing; Radical Islam vs. Jew + Christian or Satan vs. God?

The link in this video:

In 1847 the London Communist League (Karl Marx and Frederick Engels) used Hegel’s theory of the dialectic to back up their economic theory of communism. Now, in the 21st century, Hegelian-Marxist thinking affects our entire social and political structure. The Hegelian dialectic is the framework for guiding our thoughts and actions into conflicts that lead us to a predetermined solution. If we do not understand how the Hegelian dialectic shapes our perceptions of the world, then we do not know how we are helping to implement the vision. When we remain locked into dialectical thinking, we cannot see out of the box.

What is the Hegelian Dialectic?
http://www.crossroad.to/articles2/05/dialectic.htm

An example would be: 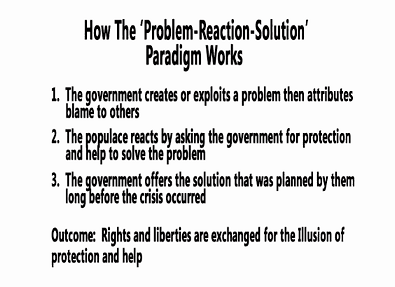 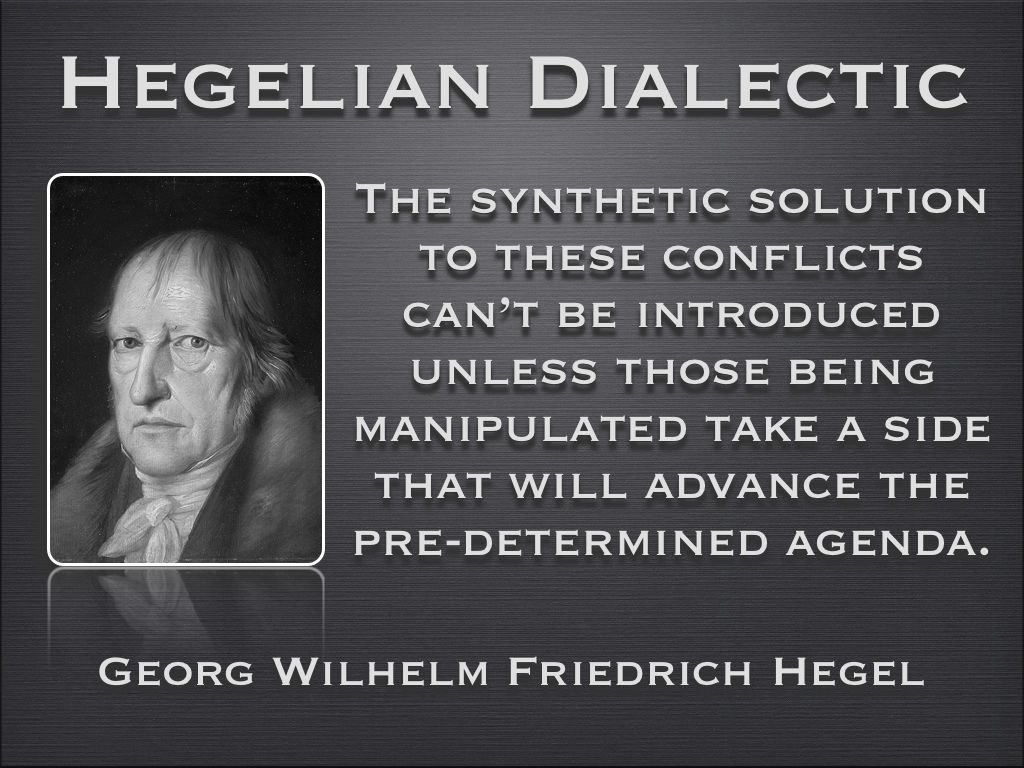 The Most Heartbreaking Unsatisfying "I told you so" of All Time.
Passover / Purim High Watch Time
Canaries In The Coal Mine
Well, It's a Blog Post About The Soon Beginning Tribulation and The Rapture of T...