So today I caught this news and all the symbolism just jumped out at me. Take it or leave it. However, since this news hit mainstream very quickly, it just makes me wonder. Is it a hint and yet another warning of how close we are to the rapture and the beginning of the 7 year Tribulation? Maybe….Maybe not…But then again, maybe…He he he…What do you think? Perhaps someone else will find other interesting things to this story that I missed? If they do and if I see them, I’ll surely add them to this post. But, for now and just for some encouragement, here is my take. 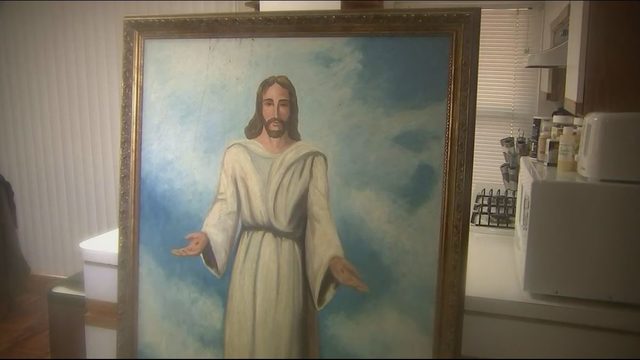 CLICK ON IMAGE TO GET TO NEWS STORY RELATED TO IMAGE

The painting of Jesus STOOD AT THE DOOR of this church when it was hit with a SEVEN alarm fire….Interesting story most especially since we are at the door step of the beginning of the 7 year Tribulation with its 7 seals, 7 trumpets and 7 bowl judgments…Before it begins there are 7 letters written to 7 churches….As here:

19 Those whom I love, I reprove and discipline, so be zealous and repent. 20 Behold, I stand at the door and knock. If anyone hears my voice and opens the door, I will come in to him and eat with him, and he with me. 21 The one who conquers, I will grant him to sit with me on my throne, as I also conquered and sat down with my Father on his throne. 22 He who has an ear, let him hear what the Spirit says to the churches.’” ~ Revelation 3:19-22

Just things that stand out to me when I see news reports like this that go mainstream. Tons of symbolism and warning bells here. 😉

A historic Massachusetts church went up in flames Tuesday night.

The First Baptist Church in Wakefield suffered an apparent lightning strike during the severe weather moving across Massachusetts.

Crews began dismantling the remnants of the historic landmark in the rain Wednesday morning.

The 150-year-old building will now be torn down completely.

Just one painting hanging in the front entrance of the church was left behind, nearly untouched.

It has just a few little drips on it, but otherwise, the painting depicting Jesus Christ survived the inferno Tuesday night and now resides inside a parishioner’s house.

Although there is no official cause yet, several residents say they did see the steeple hit by lightning, and that set off a fire that grew to seven alarms. 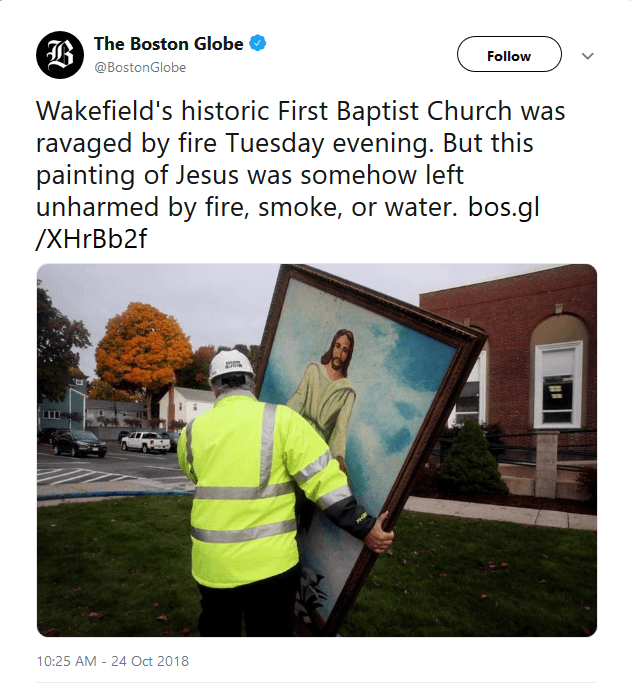 FIRST ENTRY IS: “4004 BC Creation of the world begins according to the calculations of Archbishop James Ussher”

Knowing this first of all, that scoffers will come in the last days with scoffing, following their own sinful desires. 4 They will say, “Where is the promise of his coming? For ever since the fathers fell asleep, all things are continuing as they were from the beginning of creation.” 5 For they deliberately overlook this fact, that the heavens existed long ago, and the earth was formed out of water and through water by the word of God, 6 and that by means of these the world that then existed was deluged with water and perished. 7 But by the same word the heavens and earth that now exist are stored up for fire, being kept until the day of judgment and destruction of the ungodly.

8 But do not overlook this one fact, beloved, that with the Lord one day is as a thousand years, and a thousand years as one day. 9 The Lord is not slow to fulfill his promise as some count slowness, but is patient toward you, not wishing that any should perish, but that all should reach repentance. ~ 2 Peter 3:3-9

NO Other Name!
Lemons / Etrogs Again? Something Just To Think About This Season
That's All Folks!
TWO POLE SHIFTS — THE STARS FALL TWICE