Order out of chaos. Christians Will Be To Blame, Just As It Was In Rome. Re:set Is Upon Us… 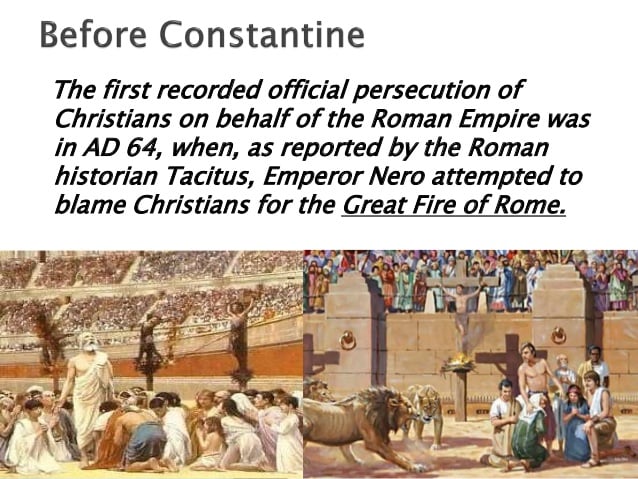 Luke 12:4-12
Have No Fear
“I tell you, my friends, do not fear those who kill the body, and after that have nothing more that they can do. But I will warn you whom to fear: fear him who, after he has killed, has authority to cast into hell. Yes, I tell you, fear him! Are not five sparrows sold for two pennies? And not one of them is forgotten before God. Why, even the hairs of your head are all numbered. Fear not; you are of more value than many sparrows.

“And I tell you, everyone who acknowledges me before men, the Son of Man also will acknowledge before the angels of God, but the one who denies me before men will be denied before the angels of God. And everyone who speaks a word against the Son of Man will be forgiven, but the one who blasphemes against the Holy Spirit will not be forgiven. And when they bring you before the synagogues and the rulers and the authorities, do not be anxious about how you should defend yourself or what you should say, for the Holy Spirit will teach you in that very hour what you ought to say.” ~ Jesus 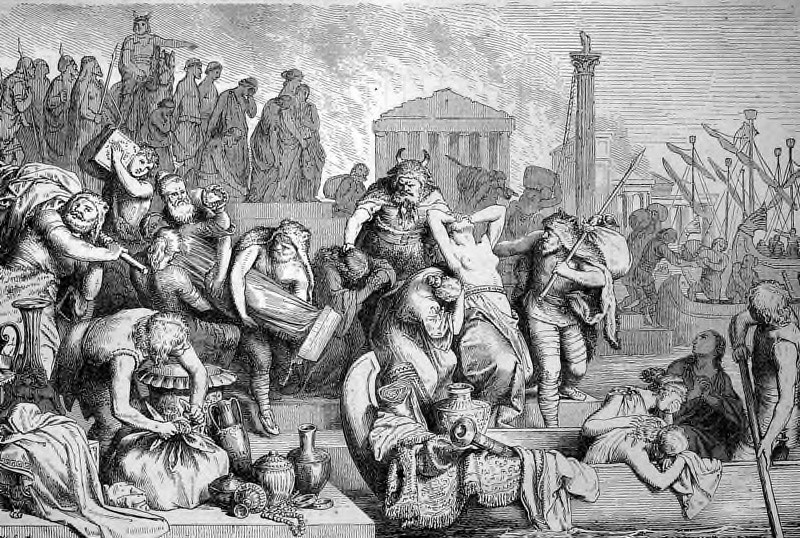 Rome is Sacked Plundered Looted by Gaiseric and His Fellow-Vandals: Heinrich Leutemann

This has all the appearance of a staged event when you compare the art work of Rome being sacked, plundered and looted in 455 with the images from the staged capitol looting of 2021. This is no coincidence.

(Interesting to take note of “Before Gaiseric marched upon Rome, Pope Leo I implored him not to destroy the ancient city or murder its inhabitants. Gaiseric agreed and the gates of Rome were thrown open to him and his men” Thrown open to come in freely unhindered..Things that make you go hmmmm: https://en.wikipedia.org/wiki/Gaiseric) 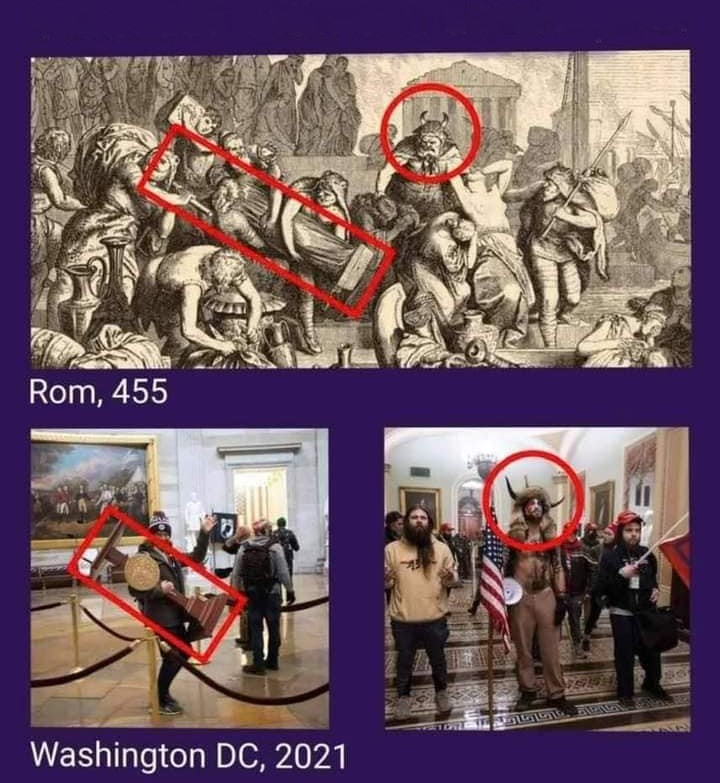 All the world’s a stage…Yes, I keep saying that because it is. What you see being done today was FORE-told in God’s word. This country is the last to fall so that what is left will be absorbed into the One World Beast System government that ANTI-Christ will rule over. You will not be a hero in this new civil war and re-instate America. This is all being devised to break the country down and yes, God is allowing it. He sent out his warnings over years and years. We are without excuse if they were ignored. America is about to be judged now. 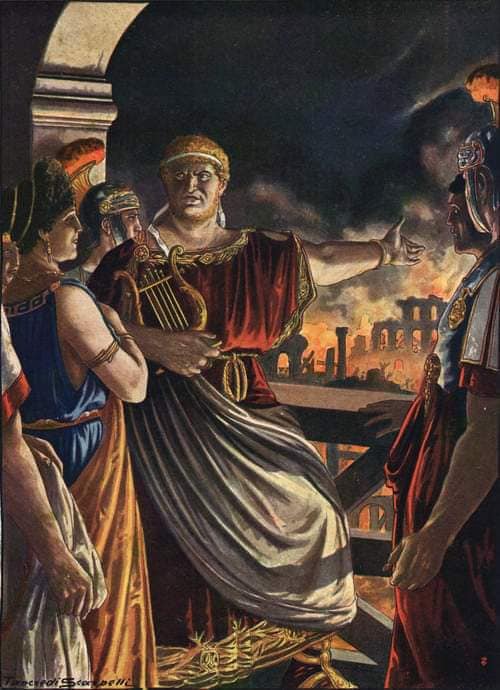 Order out of chaos. The globalist on both sides of the aisle are behind the created and staged events to cause the chaos. They set the fire and just keep stoking it by using the mass media for the propaganda and to create more anger and division in hopes of civil unrest. They need to bring America down in order to shove whats left into the global government. The “Great Re:set“ is upon the WHOLE world but at the front of the stage is America for the moment. We are being played like a fiddle. It’s very possible that we have been duped by a two faced Janus and he is playing the fiddle while Rome starts to burn. I would love to be wrong but, even if I am, the end result is still the same. Create the chaos blame the Christians just like it was done in past history. 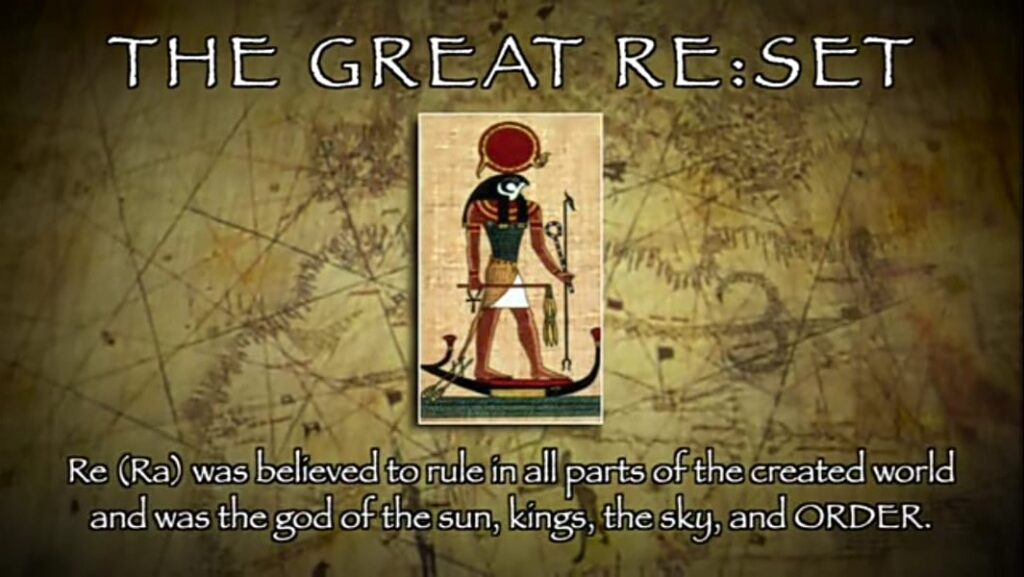 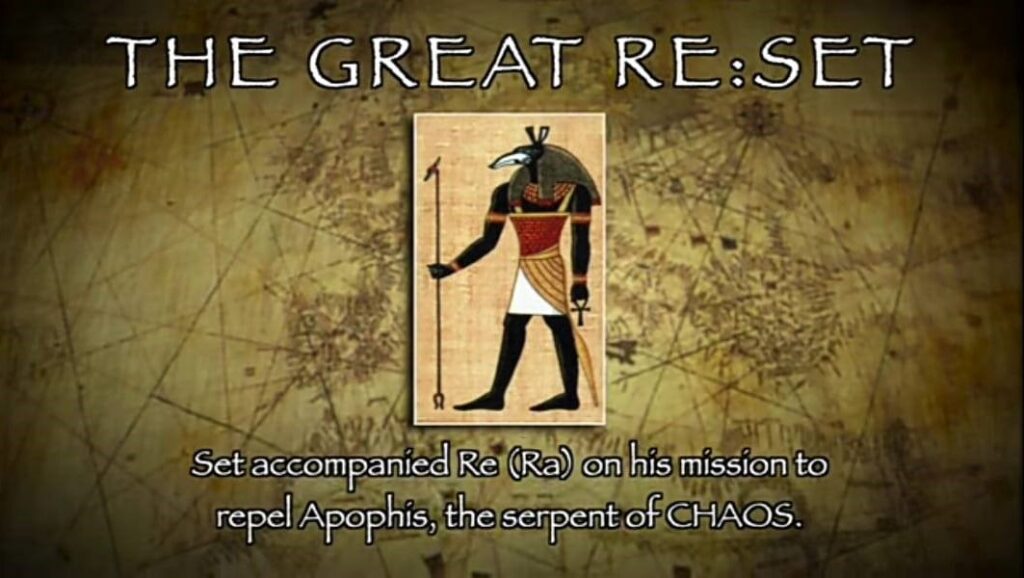 Remember, we wrestle not with flesh and blood. The “horned” man, Jake Angeli, was a main focus and showcased in the media to point out his strong support of Q. And not just him but, there were others showcased by wearing shirts you could not miss even if you wanted to. What some don’t realize is that Q is a psyop and has been a tool just as the virus has been used as a tool. There are those in this world who have came out playing the part of a lifetime and deceiving the masses into believing they are on your side when sadly, they are not. They set people up and the main target was Christians. History repeats itself because we refuse to learn from or remember it in its FULL detail. We are given the warnings but people still ignore them. The enemy of God went for the Jews and now he will flip the switch and go for the Christians and the Messianic Jews. Why? Because he hates us. He hates all that God loves but he hates God more. He wants to be God and he is about to try and take full charge. He will fail miserably during the final 7 years on the appointed timeline. So today, January 13,2021, THIS shows up in the news. There are no coincidences or mistakes in these staged events. if someone or thing is being showcased look deeper… 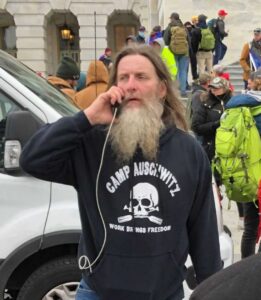 It will be done again when the Mark of the Beast comes about. They marked the Jews and killed them but, this time they will kill all those who refuse the mark….

And I saw thrones, and they sat upon them, and judgment was given unto them: and I saw the souls of them that were beheaded for the witness of Jesus, and for the word of God, and which had not worshiped the beast, neither his image, neither had received his mark upon their foreheads, or in their hands; and they lived and reigned with Christ a thousand years. ~ Revelation 20:4

THE GREAT RE:SET | ORDER OUT OF CHAOS {DISCLAIMER: I DO NOT endorse this channel. It isn’t a Christian site but the only video I could find that addressed this in only 4 mins} 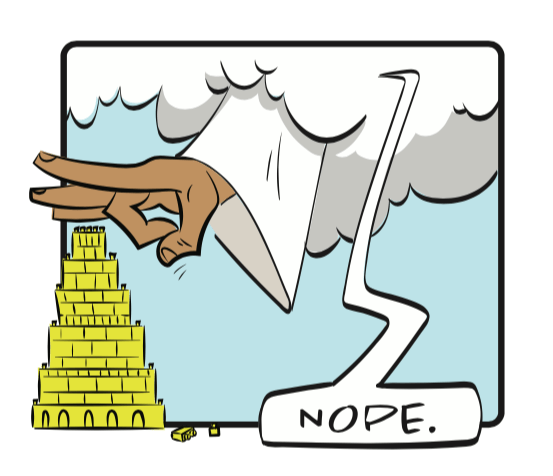 “What we see as political in our day is really nationalism vs. globalism. Does God like globalism? Ask the tower of Babel.” Quote and Image by: Todd Hampson (click on image for his site)

The globalists are staging events to cause the chaos and destruction so that what is left will have nothing but to become part of the Antichrist Beast global system. It has been prophesied that it will happen. They (occulted dark spiritual groups) are playing us like a fiddle…ALL of them….Look and SEE it…AWAKE from this world system…There is nothing you can do about it. If there were the Bible would read something like this instead:

And the people of the world rose up and believed the Lord and accepted the warnings he sent them about the one world system being shoved down their throats and they turned to the one TRUE GOD. They accepted JESUS for their salvation and king and worshiped and followed him over the world system.

No, instead God’s true word tells us that he has to step in (and in a HUGE way) to put an end to it because people refuse God and refuse to see. Only some see and only some turn to Jesus. The gate indeed is narrow.

Why Christians Should Ditch #QAnon (Part 1)

Brother’s and sisters in Jesus, the time has come to awake from sleep! Take your eyes off of this world! It is NOT our home any longer. This world belongs to Satan for a short time more. I know watching America die is like watching a loved one pass away in front of you and it’s hard to separate but you must! We are going to our TRUE home! NOTHING can ever match up to our true home with Jesus…NOTHING! Look up because redemption is soon!

We are in the end of days. If you are saved, be ready and prepared. Focus on JESUS because he is our TRUE hope. He is our savior in more ways than one because we are NOT appointed to the wrath that will fall. We may have to endure some things for a short time before the rapture but it won’t be for very long and it is NOT the end. The end is when Jesus physically comes back that 2nd time and all he has to do is speak and his enemies will fall. Right now though? If you have not already, you have to make your choice. Time to do that is no longer short, it is upon us! You DO NOT want to be here for the last 7years of judgment that will fall. Judgement not only on this country but the whole world. Please, take it seriously! Choose wisely!

Something Big Is Coming! Hmmm... A September To Remember?
Sanhedrin Passover Sacrifice Done Today. Yet Another Step Closer to Tribulation!
Could A US Embassy In Jerusalem Cause The Psalm 83 Conflict?
Are You Watching?