Killing Jesus….What’s that all about?

The video clip below is ACTUALLY telling the truth and RIGHTLY revealing the word as we are supposed to do… I will not be seeing this film. I knew that from the very first clip of what came out of O’Reilly’s mouth and the final blow was not using the word Christ because it alludes to Messiah…YEAH!! Because he IS the Messiah and the only one! One of the most important things he said ON the cross was IT IS FINISHED and saying that on the cross was key… Either the word of God is lying and God has no control over what is written and said in his word in the Bible or Bill O’Reilly is the liar and I say:

Romans 3:4 ~
God forbid: yea, let God be true, but every man a liar; as it is written, That thou mightest be justified in thy sayings, and mightest overcome when thou art judged.

It astonishes me that even when you provide evidence straight from the word of God and prove it does not match up with the actual words coming from a mere man’s mouth that people will STILL refuse to see because they put man on a pedestal over God…2 Corinthians 11:3-4 ~3 But I am afraid that as the serpent deceived Eve by his cunning, your thoughts will be led astray from a sincere and pure devotion to Christ. 4 For if someone comes and proclaims another Jesus than the one we proclaimed, or if you receive a different spirit from the one you received, or if you accept a different gospel from the one you accepted, you put up with it readily enough.Galatians 1:7-9 ~7 not that there is another one, but there are some who trouble you and want to distort the gospel of Christ. 8 But even if we or an angel from heaven should preach to you a gospel contrary to the one we preached to you, let him be accursed. 9 As we have said before, so now I say again: If anyone is preaching to you a gospel contrary to the one you received, let him be accursed.

In a few brief sentences, Bill has branded Jesus Christ Himself as a misinformed liar who had no idea what He was talking about.

http://www.nowtheendbegins.com/blog/?p=32110
“For this cause also thank we God without ceasing, because, when ye received the word of God which ye heard of us, ye received it not as the word of men, but as it is in truth, the word of God, which effectually worketh also in you that believe.” 1 Thessalonians 2:13 (KJV)

The bible, as written by God, is a funny book, and will allow you to come to any conclusion you wish to arrive at, based on your belief in Him and in it. But as quoted in the above scripture, without the belief in what God wrote as complete truth, it simply will not work to any effect within you. Belief is the key which unlocks the mysteries of the bible. The more you believe in God’s word, the more His Holy Spirit will open the pages of His word unto you. That said, Bill O’Reilly is not a believer in the bible, as we will show from his own statements….”   MORE at Highlighted LINK above ^

(5-11-15) So this is new..
O’Reilly Says Jesus Would Obey Sharia Law Against Making Pictures Of Mohammed

Most excellent interview below…Has a lot of information…I haven’t read this book but seems like a “must purchase” to add to the library:

Listening to this interview by Derek Gilbert from View From the Bunker part one and especially part two, you can see why Bill O’Reillly wrote his book Killing Jesus and why the movie was made and put out around this time…There is a plot afoot…Among other things, this is a push for Chrislam…Mainstream Christians will clamor to this because Bill is a “Christian” and ohhhh this Muslim actor now views Jesus differently which he does not…If he is not fabricating what he said then, he is merely able to embrace the Jesus that Muslims believe in which is NOT the Jesus of the Bible…If he truly changed his stance he would say: “I now see that Jesus is the son of God.” Now THAT would be something but, Bill did not write about the son of God he wrote about a man who fits the Islamic role nicely….This is just Bill continuing to push what the Pope, among others in the world system, are pushing which is the merging of Christianity together with Islam as another tool to further the goals of the NWO….But that’s just me….Here is the two part interview:

Johnny Cirucci – Illuminati Unmasked (Part 1)
“We (Derek Gilbert) welcome a first-time guest, Johnny Cirucci, author of the new book Illuminati Unmasked, to discuss the Society of Jesus and the influence the Jesuits have had on world events. While it may seem like a conspiracy too vast, the evidence raises some important questions: Why have so many countries, including nations that are officially Roman Catholic, evicted the Jesuits over the last five centuries, and does the Society of Jesus operate in the service of, or in defiance of, the Vatican?”

Johnny Cirucci – Illuminati Unmasked (Part 2)
“THE SHAPE of Christianity — and Christendom — is being shaped in subtle ways by a group that proclaims education to be a cornerstone of its ministry. Johnny Cirucci, author of the new book Illuminati Unmasked, joins us for another discussion of the ways in the which the Jesuits, through its high schools, universities, and influence on theology through the Vatican, are changing the world in ways we probably don’t realize…Scan each link to load the lower-fidelity version if need for for better listening…It is located towards the bottom of Derek Gilbert’s intro to each part.” 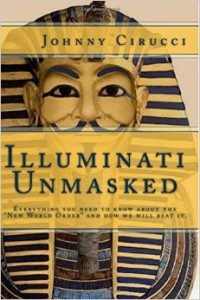 70 Days + Knowledge & Science Prove God
Wow, Wow, Wow! Bringing It All Together!
And what I say to you, I say to all: Watch! Will it be October?
Keep Watching Jerusalem! The Time Is Closer Still!