Not only is the Gog Magog battle of Ezekiel 38-39 heating up we also have the prophetic End Times Jerusalem issues popping up again. Remember my Trump And A Flying Fig Newton post? Trump is supposed to be making big news in the coming week or so about recognizing Jerusalem as Israel’s capital. Tick tock keep watching the clock….

Some key MUST READ NOW articles below and Pastor JD’s recent video:

“U.S. President Donald Trump informed Palestinian President Mahmoud Abbas that he plans to move the U.S. Embassy in Israel from Tel Aviv to Jerusalem during a phone call with the leader Tuesday, according to Abass’ spokesman Nabil Abu Rudeineh. Abbas warned Trump that the action will have “dangerous consequences.” ” MORE at LINK

This is what I read that is being said of it: “The people in Israel say Trump missed the deadline to extend the decision. Because he has already decided to move it. Israel is buzzing with excitement over rumors that tomorrow, President Trump will announce that America is moving the embassy from Tel Aviv to Jerusalem.” “The rumor mill says our State Department has already informed embassies around the world to prepare for riots/violence. Israeli newspapers says Trump told Palestinian leader Abba, that he plans to move it to Jerusalem. This is being reported in Israel and all over the middle east.”

“US President Donald Trump told Jordan’s King Abdullah II on Tuesday that he plans to move the American embassy in Israel to Jerusalem, the Jordanian royal palace said.”…MORE AT LINK

“President Donald Trump told Arab leaders in phone calls on Tuesday that he intends to move the U.S. Embassy from Tel Aviv to Jerusalem, Arab officials said, a move that could scuttle the U.S. leader’s plans to launch an Israeli-Palestinian peace plan and risks sparking violence across the Middle East. Mr. Trump is expected to delay the embassy move but will make a speech on Wednesday laying out details of the planned relocation and could also recognize Jerusalem as Israel’s capital, U.S. officials said. State Department officials have warned embassies around the world to brace for potential protests.”…MORE AT LINK

*** IT’S OFFICIAL ***…Buckle up…Even though it could take 3-4yrs for the embassy to be fully functional that does not mean the time clock that God is on will be that long. This could be the ignition of some big end times prophetic battles to unfold and of course, the rapture in and among it all. No time to play games. It’s time to be focused and think about your salvation and watch Bible prophecy unfold before your very eyes. Now we watch and wait…

PASTOR J.D. FARAG updates us as to what is happening in Jerusalem right now.

“Behold, I will make Jerusalem a cup of trembling unto all the people round about, when they shall be in the siege both against Judah and against Jerusalem. And in that day will I make Jerusalem a burdensome stone for all people: all that burden themselves with it shall be cut in pieces, though all the people of the earth be gathered together against it.” ~ Zechariah 12:2-3 It is indeed happening! All nations who try to divide Israel will bring harm upon themselves. PAY ATTENTION WHEN JERUSALEM IS IN THE NEWS. AND IT “IS” QUITE OFTEN….

We are CLEARLY SEEING the Signs Of The Times! NOW is the time to Give Your Life To Christ! Time Is Running Out and Jesus Is The Only Way! For there is one God, and one mediator between God and men, the man Christ Jesus; ~ 1 Timothy 2:5 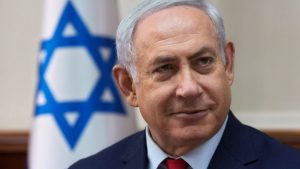 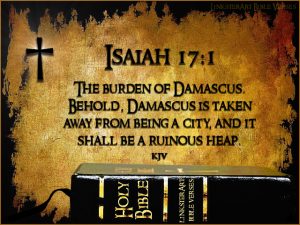 ISRAEL STRIKES NEAR OUTSKIRTS OF DAMASCUS ON MONDAY NIGHT. THIS IS TWO TIMES WITHIN TWO DAYS. QUOTE: The strike reportedly targeted a scientific research center in the village of Jamraya, three miles northwest of the capital. Loud explosions were heard in the area. AND: Israel continues to warn against the involvement of its arch enemy Iran – including its terror proxy, Hezbollah – in Syria.

Past Blog posts to revisit:

Could A US Embassy In Jerusalem Cause The Psalm 83 Conflict?

Watching The Newest Events In These Last Days (The Syria Strikes)

The Fig Tree Fell...What Does That Mean For America And Israel?
God, Sovereignty and Revelation’s Seals
Why I am not a Jehovah's Witness or Mormon
Jubilee Trump on Yom Kippur: Revelation 12 Berean Study