Just Some Things While Waiting Patiently For The Lord

Just a few links to share that I’m sure some of you have seen already but, those who haven’t, please check them out and those who have I think it’s worth the re-visit. I haven’t felt led to post anything as of late because I just feel I have shared all I can and I feel the posts and links that I have already shared say all that there is to be said. I feel the rapture truly is any minute now. Not any day but, any minute. I’m still on HIGH watch this spring for Passover and Pentecost but really just any minute. Wait patiently for it because it is coming and keep looking up because more and more of the puzzle pieces are falling into place daily now. Just take a look at the very first link below!

Practice run…The Jews will be making sacrifices again during the 7 year Tribulation at the Third temple that will be built. The very temple that the Antichrist will stop those sacrifices 3 1/2 years into the 7yr Tribulation so that he can stand in the temple to lie and proclaim that he is God….That clock is running out FAST to be saved before it begins!

“There is breaking news out of Jerusalem that descendants of Moses’ brother Aaron, called Kohanim, have just conducted a Passover sacrifice at the foot of the Temple Mount, just yards from where the Jewish Temple once stood. The sacrifice is a groundbreaking moment in modern Israeli history and likely the first time since 68 AD that a Passover sacrifice was conducted in such close proximity to the Temple Mount….” Click link right above the image: 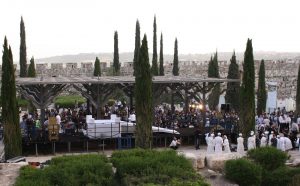 Below is a 37 min video…Pastor J.D. talks about three significant developments chief of which is the dismantling of America. And the Biblical prophecies of Isaiah 17, Zechariah 12 & Ezekiel 38 in process now…
One of my on-line friends Sharon pointed out from the video:

THREE “most significant” developments that happened this past week, in the PAST SIX DAYS.

#1. THE DISMANTLING OF AMERICA FROM WITHIN: This is gaining traction. It will render America irrelevant on the world scene. We are witnessing the agenda of “the shadow government” from the playbook of Saul Alinsky — The New World Order.

#2. The “peace plan” with Jerusalem as the “bulls-eye”. Several specific and important items happened relating to this “peace” effort.

#3. The increasing threat from Russia and Iran by way of Syria.

President Trump’s appointments of John Bolton as National Security Adviser and Pompeo as Secretary of State SPARKS FEARS of war. Just ONE LITTLE SPARK will set these events into their destined fulfillment. KEEP ALERT. BE ENCOURAGED. JESUS IS INDEED COMING QUICKLY.

Which brings me to the latest in the protests orchestrated for removing our 2nd amendment right yet AGAIN in America…Gun grab again…There is a reason to this madness and all the other madness that surrounds issues of this nature. We are on the verge of the culmination of all these things. Jesus is soon to return and is the ONLY solution. We live behind enemy lines and the enemy has been plotting and planning the killing of God and all things he loves for ages now. They plot and plan for world dominance and Lucifer plans his reign not just over this world but to try and take God’s place. We are seeing it and living in the middle of it all. God wins however and the KEY thing for you and I to do in this battle is to pick the right side and do it NOW. Salvation in Jesus and picking God is the winning side. Two hour video below to give you some idea into what is going on and why. Also, the tried and true “Know Your Enemy” by the Fuel Project is highly recommended. Wake up but, most importantly, ACCEPT JESUS and GET SAVED because time is almost up and the Tribulation is soon to begin. IT IS HAPPENING even if there are those who want to pretend it is not.

Some relevant links below:

And here are a couple of videos of some YouTube channels I follow for encouragement and DISCERNMENT:

Even the Animals Sense Something Is about to Happen [birds & insects AWOL in Oregon] Video Link:

If this earthquake that he saw happens on Friday then we will know it holds validity and, if not, that does not mean this child did not have an experience with the Lord but perhaps misunderstood the message?? Either way we will see but, it’s still worth sharing:

The original video (15 mins long) 8yr old from Sweden and his dad translates:

Israel Is The Key To Unlock Rapture Timing
The Shemitah DID NOT Happen As Expected…Why?
If Jesus Wasn’t God Then He Deserved An Oscar
I Pet Goat 2 Predicts Covid Vaccines???