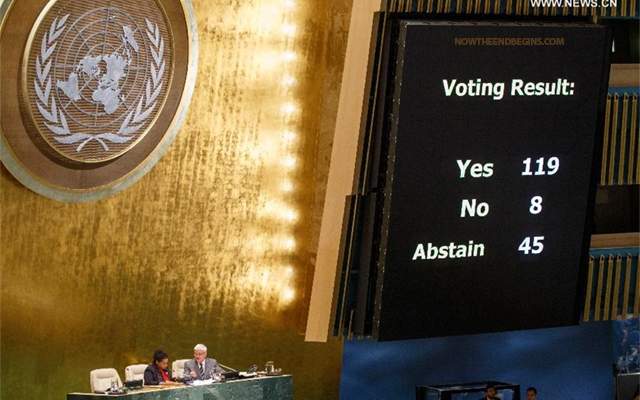 Here is an excellent write up from Geoffrey Grider at Now The End Begins talking about tomorrows (9/30/15) events at the UN….Great site to visit daily as well! I just haven’t had the time to write a blog but want to make sure the site is updated…I need to cover The Pope-palooza we just had in the USA as well…Maybe I’ll get to that before the Rapture..he he….This, like I mentioned, is excellent:

“I will also gather all nations, and will bring them down into the valley of Jehoshaphat, and will plead with them there for my people and for my heritage Israel, whom they have scattered among the nations, and parted my land.” Joel 3:2 (KJV)

Let’s start with what is happening on September 30th, 2015: The world body of the United Nations General Assembly adopted the resolution on raising the flag of Palestine at the United Nations (document A/69/L.76) by a recorded vote of 119 in favour to 8 against (Australia, Canada, Israel, Marshall Islands, Federated States of Micronesia, Palau, Tuvalu, United States), with 45 abstentions.
united-nations-votes-119-to-8-in-favor-of-raising-flag-palestine-over-un

Calling it “a historic vote”, the observer of the State of Palestine said that the General Assembly had sent an important message to the Palestinian people at a critical time. Raising the flag would signify to Palestinian people everywhere that the international community supported them.

Israel’s representative called the resolution a photo opportunity, cautioning that as long as the Palestinians believed they could achieve their political goals without making concessions, they would continue to avoid taking the difficult decisions needed for peace. Instead, he said, the photo truly worth taking was one of an Israeli Prime Minister and a Palestinian leader raising the flags of the two peoples living together in peace.

Palestinian president Mahmoud Abbas said this about the flag raising event: “On the vote to raise our flag at the U.N., the international community demonstrated its solidarity with the Palestinian people. Now it must act with urgency to seize the momentum from this symbolic gesture and provide a clear plan to end the illegal Israeli occupation, uphold human rights and achieve justice. It is time to finally achieve the independence of the State of Palestine, peacefully resolving the Palestinian-Israeli conflict — the core of the Arab-Israeli conflict — as was promised long ago.” source

The Bible teaches that, after the Rapture of the Church, an event called the Time of Jacob’s Trouble will begin. The focus of this time, while it is worldwide, will be primarily on Israel and the Jewish people. Jacob’s name, as you recall, was changed by God to Israel. So it is the time of Israel’s trouble, it has nothing to do with the Christian church. We read about this in the book of the prophet Jeremiah:

“Alas! for that day is great, so that none is like it: it is even the time of Jacob’s trouble; but he shall be saved out of it.” Jeremiah 30:7 (KJV)

This event is also described in Matthew 24 by Jesus as a time of “great tribulation” such as the world has never seen up to that moment, or will ever see in the history of the world. That means it is an event more horrific that all the world wars and Hitler’s Holocaust put together. This is what Jesus says:

“When ye therefore shall see the abomination of desolation, spoken of by Daniel the prophet, stand in the holy place, (whoso readeth, let him understand:) For then shall be great tribulation, such as was not since the beginning of the world to this time, no, nor ever shall be.” Matthew 24:15,21 (KJV)

So what does all this have to do with the United Nations General Assembly raising the flag of Palestine tomorrow? Plenty! In fact, I will go so far as to say that the prophet Joel was already seeing this day in his prophetic visions of the future from the Lord. Look at what he says in chapter 3 of his book:

“For, behold, in those days, and in that time, when I shall bring again the captivity of Judah and Jerusalem, I will also gather all nations, and will bring them down into the valley of Jehoshaphat, and will plead with them there for my people and for my heritage Israel, whom they have scattered among the nations, and parted my land. Yea, and what have ye to do with me, O Tyre, and Zidon, and all the coasts of Palestine?” Joel 3:1,2,4 (KJV)

Now read and reread the above verses prayfully and carefully, and then consider the following observations I will make about them:

“And thou shalt come up against my people of Israel, as a cloud to cover the land; it shall be in the latter days, and I will bring thee against my land, that the heathen may know me, when I shall be sanctified in thee, O Gog, before their eyes.” Ezekiel 38:16 (KJV)

That’s God talking, and He says that Israel is HIS Land, no one else’s. He has given it to the Jewish people as a possession, yes, but it remains His Land for eternity. Everywhere you turn these days people are talking about the “Two State Solution”. Even Prime Minister Benjamin Netanyahu has said he would be open to a Two State Solution. Well, sorry to say, that is not how God views it in the Bible, and that is not how it will go down. God is preparing to implement a One State Solution at the Battle of Armageddon at the end of the Tribulation. The Bible says He is going to send His Son and His Church to create it:

“And I saw heaven opened, and behold a white horse; and he that sat upon him was called Faithful and True, and in righteousness he doth judge and make war. His eyes were as a flame of fire, and on his head were many crowns; and he had a name written, that no man knew, but he himself. And he was clothed with a vesture dipped in blood: and his name is called The Word of God. And the armies which were in heaven followed him upon white horses, clothed in fine linen, white and clean. And out of his mouth goeth a sharp sword, that with it he should smite the nations: and he shall rule them with a rod of iron: and he treadeth the winepress of the fierceness and wrath of Almighty God.” Revelation 19:13-16 (KJV)

Tomorrow, I would ask you to pay close attention to the proceedings at the United Nations as they raise the flag of Palestine over the headquarters of the “gathering of nations”. For it is the beginning of the fulfillment of the prophecy of Joel, written thousands of years ago, yet more current than tomorrow’s events. It will reach it’s full conclusion at the Battle of Armageddon, but it is beginning now. We are so close to the Rapture that it’s almost like the two dispensations are over-lapping each other. In fact, we are transitioning from the Church Age which ends with the Rapture, to the Time of Jacob’s Trouble. We are living right now in the overlap between the two.

We are living in the days of prophecy, the promised end times of the Bible. Go out and get something done for Jesus while there is still time.

Listen, and look up into the Eastern sky, as “come up hither” is about to be spoken to a born again and Blood-washed Church.

Are YOU ready for what comes next?

“Looking for that blessed hope, and the glorious appearing of the great God and our Saviour Jesus Christ;” Titus 2:13 (KJV)

Also, please avail yourself of John Haller’s update from 9/27/15 as well. In the beginning of the video his mic is not working but he gets it fixed very quickly….September is turning into exactly what it was assumed to with the Pope’s visit and what is coming for Israel after this 4th Blood Moon in the Tetrad..Also, the stock market is still up and down daily and unstable…Keep watching but most importantly GET SAVED any tomorrow may be too late!

Trump's Peace Plan
"So, Could You Not Watch With Me One Hour?"
Earthquake Resurrection...Are The Horses Already Running?
Yes, Exactly!