On the heels of the controversy between the US and Israel’s PM Netanyahu and the arrival of Israel’s president Reuven Rivlin to New York, where he was to address the United Nations Special Assembly to mark International Holocaust Remembrance Day (event was cancelled due to the weather), a photo was captured and shared of the falling snow leading up to the event: 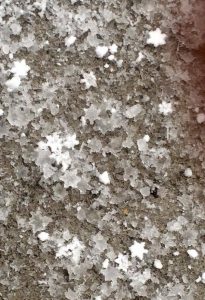 Photo was shared by Apologia Facebook page ~”These lovely star-shaped snowflakes were spotted swirling around New York City at about 1:15 eastern time today and were photographed and tweeted by Jennifer Roesch. What an amazing sight!” ~ The flakes look like the star David!

It would appear as if these snowflakes are confirming a message that God is sending. You may say poppycock but after all:

Job 37:5-7 ~
5 God thunders wondrously with his voice;
he does great things that we cannot comprehend.
6 For to the snow he says, ‘Fall on the earth,’
likewise to the downpour, his mighty downpour.
7 He seals up the hand of every man,
that all men whom he made may know it.

Verse 13 reads like this:
13 Whether for correction or for his land
or for love, he causes it to happen.

I think he is, gently at the moment, letting us know he is not happy with the way America is dealing with his people Israel. Will we heed any of his warnings? I doubt that we will. These are the end times and per Bible prophecy we know that God himself will need to intervene to bring Israel back to him and keep the land in their care. This country used to help our alley in that task and so we were blessed by it but now we are bullying and shoving our long time friend around with no regard whatsoever. In his word God says it all:

Genesis 12:1-31 Now the Lord said to Abram, “Go from your country and your kindred and your father’s house to the land that I will show you. (Israel) 2 And I will make of you a great nation, and I will bless you and make your name great, so that you will be a blessing. 3 I will bless those who bless you, and him who dishonors you I will curse, and in you all the families of the earth shall be blessed.” (emphasis added)
An example:
THE GENESIS 12:3 CURSE: Barack Obama has ordered his campaign team to travel to Israel and work to sabotage the upcoming re-election of Israel PM Benjamin Netanyahu. They arrived yesterday.‬
http://www.nowtheendbegins.com/blog/?p=30271
Don’t be surprised by the fall out. Pray for the peace of Israel and Jerusalem and pray for mercy because the leaders in charge don’t care nor think God has any say so in it at all. Huge mistake…Huge! But that’s just me….Bre G