Fellow Americans, Have You Been Paying Attention To This? Beast System Rising. 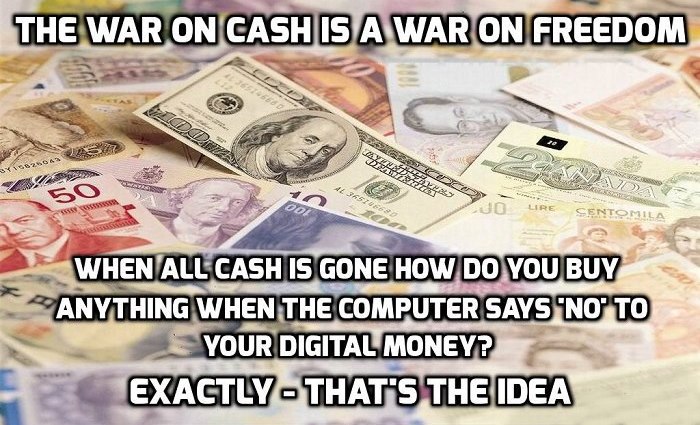 Have you been paying attention to this? (10min video) This is all part of the one world government Beast system that will be operating during the 7 year Tribulation. It includes the human race to be under not only total health control and dominance but also how you run your life via making money and spending money (banking). The mark of the beast will include not only the promise of health “protection” but also your ability to spend money and showing your allegiance to the Antichrist and the Beast system.

Revelation 13:16-18
Also it causes all, both small and great, both rich and poor, both free and slave, to be marked on the right hand or the forehead, so that no one can buy or sell unless he has the mark, that is, the name of the beast or the number of its name. This calls for wisdom: let the one who has understanding calculate the number of the beast, for it is the number of a man, and his number is 666.

More Mark of The Beast verses:

Revelation 14:11
And the smoke of their torment goes up forever and ever, and they have no rest, day or night, these worshipers of the beast and its image, and whoever receives the mark of its name.”

Revelation 16:2
So the first angel went and poured out his bowl on the earth, and harmful and painful sores came upon the people who bore the mark of the beast and worshiped its image.

Revelation 19:20
And the beast was captured, and with it the false prophet who in its presence had done the signs by which he deceived those who had received the mark of the beast and those who worshiped its image. These two were thrown alive into the lake of fire that burns with sulfur.

America was pretty much the last bastion of hope and individual freedom but, we are pretty much in the grave with one hand sticking out and reaching up. IF this nominee gets in and changes our banking system, that will shove that hand right on down into that grave. On that note, if she does not get in we should not be so relieved as to think we are safe. Remember they use hegelian dialectic principals such as, the first person being so out in the open radical but, the next one may seem to be in the middle and balanced but, only so far as to put a cover over the eyes so as to get in and work covertly to put the original plan into place anyway.

Just thinking out loud here. As far gone as this country has gone, I do think that this might be the thing that would actually get people worked up enough to put a stop to becoming another Venezuela or China. I believe that the only thing that will stop Americans finally fighting back from becoming a communistic banking system on top of all the other “progressive” moves shoved down our throats via covert actions is rapture and the chaos that will come along with it. The Antichrist Beast system will rise up out of those ashes and have a global controlling governmental system and people desperate enough to beg them to take over their lives.

Are you awake to this yet? If not, then the time is NOW! The only thing at this point in the timeline of events is to first and foremost accept Jesus as your savior TODAY! Then, pay attention to your surroundings and keep watch knowing the Jesus is soon to make a move. We are living in the setting up stage of this Beast system but we will not be living in it. Those left behind will be living in it. Keep in mind that if you are saved you are NOT appointed to the wrath that will fall on this system and the people and fallen spiritual beings behind the scenes who are building and promoting and will operate this final system. In the Book of Daniel that rock that smashes the final government system to pieces is Jesus! Be on team Jesus!

Daniel 2:31-35
“You saw, O king, and behold, a great image. This image, mighty and of exceeding brightness, stood before you, and its appearance was frightening. The head of this image was of fine gold, its chest and arms of silver, its middle and thighs of bronze, its legs of iron, its feet partly of iron and partly of clay. As you looked, a stone was cut out by no human hand, and it struck the image on its feet of iron and clay, and broke them in pieces. Then the iron, the clay, the bronze, the silver, and the gold, all together were broken in pieces, and became like the chaff of the summer threshing floors; and the wind carried them away, so that not a trace of them could be found. But the stone that struck the image became a great mountain and filled the whole earth. 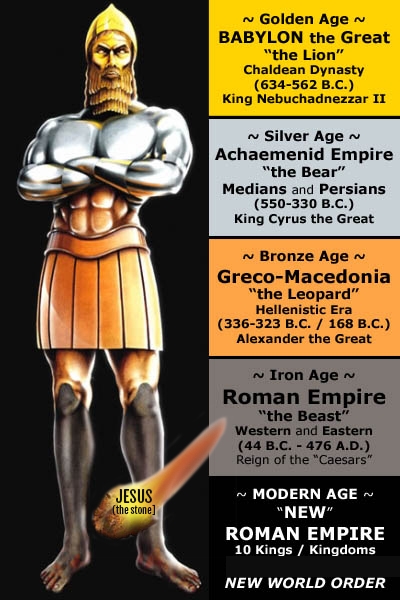 CHOOSE THE RIGHT SIDE IN THIS BATTLE…HOW TO GET TO HEAVEN!