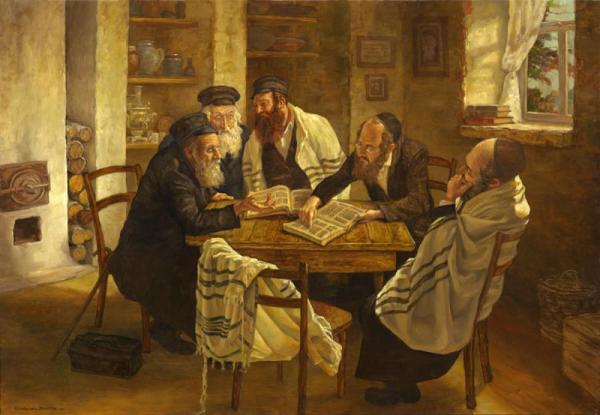 This video is only 5 minutes long but really powerful! As a Jew, Mr. Gabizon struggled between Judaism and Christianity, until he took it to his rabbi only to realize the most shocking truth!!! 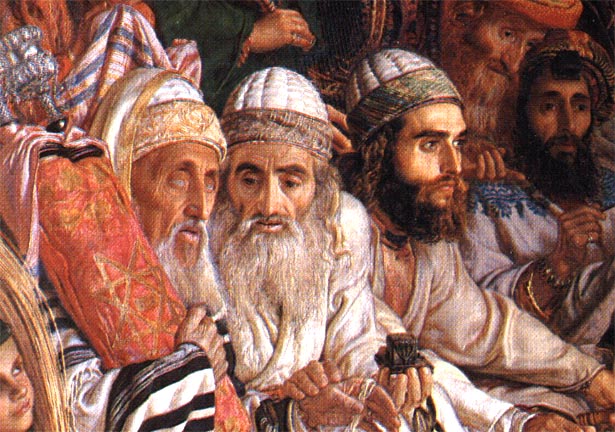 Isaiah 6
Isaiah’s Vision of the Lord

“Holy, holy, holy is the Lord of hosts;
the whole earth is full of his glory!”

4 And the foundations of the thresholds shook at the voice of him who called, and the house was filled with smoke. 5 And I said: “Woe is me! For I am lost; for I am a man of unclean lips, and I dwell in the midst of a people of unclean lips; for my eyes have seen the King, the Lord of hosts!”

6 Then one of the seraphim flew to me, having in his hand a burning coal that he had taken with tongs from the altar. 7 And he touched my mouth and said: “Behold, this has touched your lips; your guilt is taken away, and your sin atoned for.”

Isaiah’s Commission from the Lord

“‘Keep on hearing, but do not understand;
keep on seeing, but do not perceive.’
10
Make the heart of this people dull,
and their ears heavy,
and blind their eyes;
lest they see with their eyes,
and hear with their ears,
and understand with their hearts,
and turn and be healed.”
11
Then I said, “How long, O Lord?”
And he said:
“Until cities lie waste
without inhabitant,
and houses without people,
and the land is a desolate waste,
12
and the Lord removes people far away,
and the forsaken places are many in the midst of the land.
13
And though a tenth remain in it,
it will be burned again,
like a terebinth or an oak,
whose stump remains
when it is felled.”
The holy seed is its stump.

Run to and fro through the streets of Jerusalem,
look and take note!
Search her squares to see
if you can find a man,
one who does justice
and seeks truth,
that I may pardon her.
2
Though they say, “As the Lord lives,”
yet they swear falsely.
3
O Lord, do not your eyes look for truth?
You have struck them down,
but they felt no anguish;
you have consumed them,
but they refused to take correction.
They have made their faces harder than rock;
they have refused to repent.

6
Therefore a lion from the forest shall strike them down;
a wolf from the desert shall devastate them.
A leopard is watching their cities;
everyone who goes out of them shall be torn in pieces,
because their transgressions are many,
their apostasies are great.

7
“How can I pardon you?
Your children have forsaken me
and have sworn by those who are no gods.
When I fed them to the full,
they committed adultery
and trooped to the houses of whores.
8
They were well-fed, lusty stallions,
each neighing for his neighbor’s wife.
9
Shall I not punish them for these things?
declares the Lord;
and shall I not avenge myself
on a nation such as this?

10
“Go up through her vine rows and destroy,
but make not a full end;
strip away her branches,
for they are not the Lord’s.
11
For the house of Israel and the house of Judah
have been utterly treacherous to me,
declares the Lord.
12
They have spoken falsely of the Lord
and have said, ‘He will do nothing;
no disaster will come upon us,
nor shall we see sword or famine.
13
The prophets will become wind;
the word is not in them.
Thus shall it be done to them!’”

18 “But even in those days, declares the Lord, I will not make a full end of you. 19 And when your people say, ‘Why has the Lord our God done all these things to us?’ you shall say to them, ‘As you have forsaken me and served foreign gods in your land, so you shall serve foreigners in a land that is not yours.’”

20
Declare this in the house of Jacob;
proclaim it in Judah:
21
“Hear this, O foolish and senseless people,
who have eyes, but see not,
who have ears, but hear not.
22
Do you not fear me? declares the Lord.
Do you not tremble before me?
I placed the sand as the boundary for the sea,
a perpetual barrier that it cannot pass;
though the waves toss, they cannot prevail;
though they roar, they cannot pass over it.
23
But this people has a stubborn and rebellious heart;
they have turned aside and gone away.
24
They do not say in their hearts,
‘Let us fear the Lord our God,
who gives the rain in its season,
the autumn rain and the spring rain,
and keeps for us
the weeks appointed for the harvest.’
25
Your iniquities have turned these away,
and your sins have kept good from you.
26
For wicked men are found among my people;
they lurk like fowlers lying in wait.
They set a trap;
they catch men.
27
Like a cage full of birds,
their houses are full of deceit;
therefore they have become great and rich;
28
they have grown fat and sleek.
They know no bounds in deeds of evil;
they judge not with justice
the cause of the fatherless, to make it prosper,
and they do not defend the rights of the needy.
29
Shall I not punish them for these things?
declares the Lord,
and shall I not avenge myself
on a nation such as this?”

30
An appalling and horrible thing
has happened in the land:
31
the prophets prophesy falsely,
and the priests rule at their direction;
my people love to have it so,
but what will you do when the end comes?

Then the disciples came and said to him, “Why do you speak to them in parables?” 11 And he answered them, “To you it has been given to know the secrets of the kingdom of heaven, but to them it has not been given. 12 For to the one who has, more will be given, and he will have an abundance, but from the one who has not, even what he has will be taken away. 13 This is why I speak to them in parables, because seeing they do not see, and hearing they do not hear, nor do they understand. 14 Indeed, in their case the prophecy of Isaiah is fulfilled that says:

16 But blessed are your eyes, for they see, and your ears, for they hear. 17 For truly, I say to you, many prophets and righteous people longed to see what you see, and did not see it, and to hear what you hear, and did not hear it.

John 12:36-43
While you have the light, believe in the light, that you may become sons of light.”
The Unbelief of the People

When Jesus had said these things, he departed and hid himself from them. 37 Though he had done so many signs before them, they still did not believe in him, 38 so that the word spoken by the prophet Isaiah might be fulfilled:

“Lord, who has believed what he heard from us,
and to whom has the arm of the Lord been revealed?”

39 Therefore they could not believe. For again Isaiah said,

Acts 28:23-28
23 When they had appointed a day for him, they came to him at his lodging in greater numbers. From morning till evening he expounded to them, testifying to the kingdom of God and trying to convince them about Jesus both from the Law of Moses and from the Prophets. 24 And some were convinced by what he said, but others disbelieved. 25 And disagreeing among themselves, they departed after Paul had made one statement: “The Holy Spirit was right in saying to your fathers through Isaiah the prophet:

28 Therefore let it be known to you that this salvation of God has been sent to the Gentiles; they will listen.” 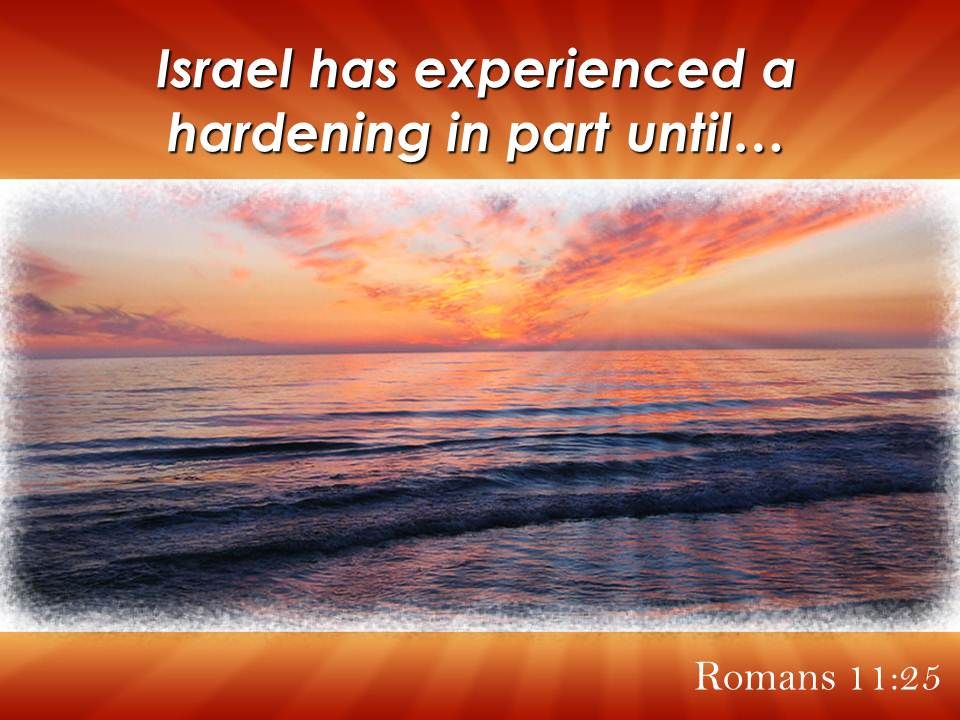 Romans 11:25
Lest you be wise in your own sight, I do not want you to be unaware of this mystery, brothers: a partial hardening has come upon Israel, until the fullness of the Gentiles has come in.

Will all Israel be saved in the end times? (click to find out)

THE FINAL ROMAN EMPEROR, THE ISLAMIC ANTICHRIST, AND THE VATICAN’S LAST CRUSADE
IF THE SKY DOESN'T TELL US THE CORRECT TIME, THEN WHAT OR WHO DOES? (July watch)
Could A US Embassy In Jerusalem Cause The Psalm 83 Conflict?
The Great Narrative and The Metaverse