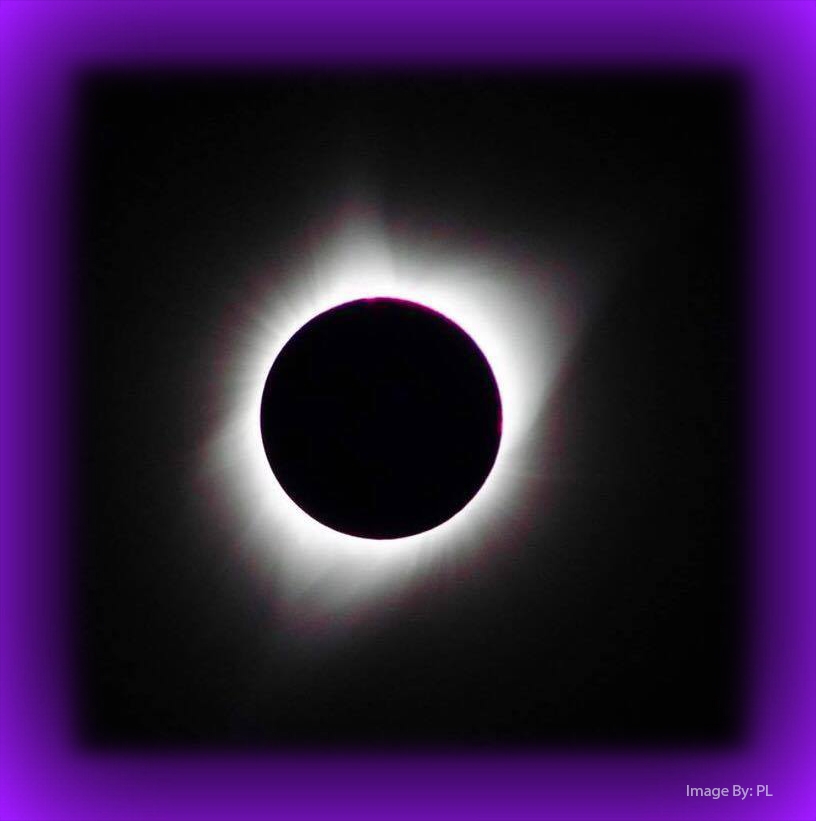 Like so many others, I watched the solar eclipse yesterday, August 21st. I live in the line of totality and got to see the total solar eclipse for 2 minutes and 13 seconds. That moment passed much too quickly, but what I saw was unforgettable. I saw a the precision of a God that makes no mistakes, that lines things up to the smallest degree so that He can show His glory. I saw a thing of beauty like no other, beauty that a loving God lavishes upon His creation.

I found myself tearing up, looking at that spectacular sight, but it wasn’t just the beauty of it. I felt the Holy Spirit so strongly in that moment. In that moment it was just Him and me, like He made this moment just for me to see. He knows that I have waited for this eclipse and that there is great significance to it, as a warning to this country and the world, but also a precursor to the Great Sign coming next month. He knew that was on my mind, so this eclipse held that that much more significance for me. He was so very close in that moment and I could not help but cry.

After it was over, watching the news reports of the eclipse, I saw so many people from around the country, staring at the sky in wonder, ooh-ing and aah-ing. Many were in tears, as I was. I cannot account for what they all were feeling, but of course, many of them do not know Jesus as their savior. This makes me wonder just how many of them were seeing creation without a Creator. How is this even possible? How can they look at this miracle in the sky and not see the Miraculous God who set it all in motion?

The day before the eclipse I was watching the news, and the atheist evolutionist scientist named Michio Kaku was speaking enthusiastically about the coming eclipse and how excited he was to see it. He stated:

“I’m a physicist, and this is about as close as a scientist can get to a spiritual experience. You feel like you are at one with the universe; cosmic forces right there in your sunglasses. Incredible!……We are witnessing a cosmic coincidence.”

My heart broke to hear those words from a man who is esteemed as a genius. He can see the creation and marvel at it, yet he cannot see the Creator behind it all. I feel sorry for him that this is as close to a spiritual experience he can have, because God has offered him, and all of us, to have unlimited spiritual experiences with Him, if we would but believe and commune with Him as often as we choose. Michio Kaku sees this eclipse as a mere coincidence, and that is truly heartbreaking. How could you possibly believe such a thing? There are no coincidences with God, for He is a God of order, a Master of precision and an Artist beyond compare. Yet He is not given the credit He is due.

Of all of the millions of people watching the eclipse, I wonder how many were thinking of the Creator rather than the creation? Oh, how I pray that the number was a large one.

Another magnificent event happens in the heavens 33 days after the eclipse. The Bible calls it a “Great Sign in the heavens.” It will not be viewed with glasses or get much hype at all. It is only lauded by a small group of those watching for the return of Christ. The rest of the world, unbelievers and believers alike are paying no attention the huge message God is sending to us. He laid it out clearly in the stars since the beginning of time, and He laid out clearly in His Word. (Revelation 12) How many are even paying attention?

Here is an interesting quote from Pete Garcia from his article “Grapes of Wrath,” posted in the Omega Letter:

“As previously mentioned, the number of those who are still waiting for the Lord to return is diminishing number. Out of the seven and a half billion people alive on the planet today, only two billion claims some form of the Christian faith (about half Protestant, half Catholic). Out of the two billion ‘Christians,’ only around one billion believe that Jesus will ever physically return to the earth. Out of the one billion, perhaps only 10% of that believe Christ will come back in their lifetime. Of that number (100,000,000), perhaps 15% (15,000,000) believe that Christ’s return is imminent. So 15M out of 7.5B is about .2% of the total global population believe Christ’s return is imminent. Not a lot of people when you look at it from that perspective.”

And let’s take it a step further. The 15 million that believe Christ’s return is imminent must be avid watchers, recognizing the many signs, to believe He could come any time now. Out of those 15 million avid watchers, how many are looking at the signs in the heavens that God is showing us? How many believe that the Great Sign of Revelation 12 is showing us how short our time is on this earth? To come up with an educated guess, I used my Facebook group full of Bible prophecy watchers to see how many are truly watching this Great Sign. The group has about 2,500 members. Only about 20 people actively post about the Great Sign. There are many more that don’t post but “like” the comments. To be generous, I would say perhaps 250 people are looking at the Great Sign with interest. That is about 10% of the group. Now, apply that number to Garcia’s 15 million number and we have about 1.5 million people looking at the Great Sign. I do pray it is more.

But what if that number is accurate? What if out of 7.5 billion people in the world, only 1.5 million are looking at the signs in the heavens, believing Jesus is coming this fall? That is .02% of the population; 1 in every 5,000 people. How sad is that? When you think of it in those terms, don’t you feel sorry for our Savior and God? Do you feel His sorrow that so many are ignoring His signs to us, given to us as a warning so that none would perish? It makes me feel sad and so disappointed that humanity, as a whole, is choosing to ignore His clear warning signs.

But at the same time, I feel so extremely blessed! Who am I that God would reveal these signs in a way that I would understand? Who am I that I would be one who would see and believe? And that is what it all comes down to: belief. Many have heard of this sign, yet so many do not believe. Many look at the alignment in the stars and say it is a coincidence, much the same way that Kaku did when speaking of the eclipse. Is it not heartbreaking that many believers in Jesus have the same view of this Great Sign that an atheist evolutionist does? It’s all so surreal.

And once again I tell you, if nothing happens by the end of September, do not be discouraged. It does not negate this Sign. It could very well be a sign of warning, but I do not believe we would have much to wait after this Sign plays out. God wants us only to believe. I choose to believe and risk being wrong, instead of scoffing at this sign and find out that it is true. God loves our belief, that He can do amazing things in the world, in our lives, and in the skies. All we need to do is watch and believe.

Kiss The King, The Son
Introductions
It's All In Play Now!
That Still Small Voice