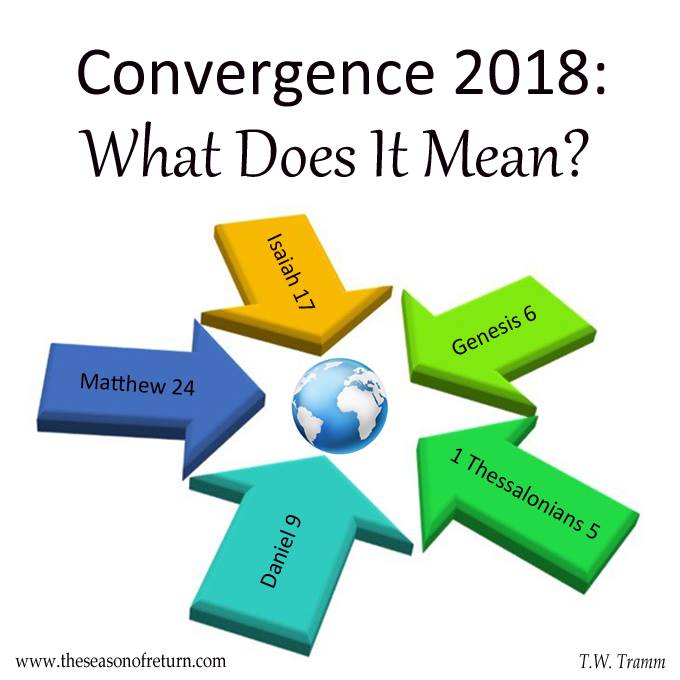 You know when someone writes (and brilliantly I might add) all the things you know and have studied about and think about daily but are just too overwhelmed or too lazy to write about yourself? Well, this is one of those articles. (he he he) Please enjoy this by T.W. Tramm at Season of Return Ministries below. Please visit the website because there are several other articles there that you will equally enjoy. I included his Facebook link below so that you can follow him also. Enjoy this…I sure did!

A MONTH AWAY from Israel’s landmark 70th anniversary, the drums of war are beating loudly: The US, UK, and France have launched a joint airstrike on targets in Damascus. Russia, allied with Turkey and Iran in Syria, claims to have intercepted most of the US missiles and is threatening “consequences.”

The alliance between Russia, Turkey, and Iran portends a receding of US influence in the Middle East and sets the stage for the fulfillment of major end-times Bible prophecies such as Isaiah 17 and Ezekiel 38.

Wars and threats of war are not the only biblical signs flashing in spring 2018. In fact, virtually every sign given as a precursor to Jesus’ return is present and accounted for:

Perhaps the most telling sign of all is that, despite increasing natural disasters, threats of war, and other troubling signs, life continues as normal for most people: they are “buying, selling, planting, building, and marrying” (Luke 17:26-29).

In addition to the above signs, we’re witnessing a once-in-history convergence of prophetic timelines this year:

To appreciate the unlikelihood of the above timelines converging in 2018, consider that each belongs to a different prophecy written centuries apart by a different author. The men who recorded them had no knowledge of the future year the Nation of Israel and its capital, Jerusalem, would be restored and thus no way of knowing or synchronizing an end date. Yet, defying all odds, each independently calculated timeline points to 2018!

Another thing to consider about the three-way convergence of timelines is that it ends this spring. Because biblical years begin and end at Nisan 1, the calculated 6,000th year from Creation and Jubilee end April 18-19. A month later marks the end of the 70th year since Israel became a nation.4 From these dates forward, we enter into the 6,001st, 51st, and 71st years respectively.

The convergence of timelines this year is not the only reason spring is considered a high watch time. Spring, both literally and typologically, is a time of transformation, new beginnings, and harvest. Spring is also the season in which the shepherd in Song of Solomon comes to gather and spirit away his beloved, a Gentile Shulammite maid:

“The voice of my beloved! Behold, he comes leaping upon the mountains, skipping upon the hills. My beloved is like a gazelle or a young stag. Behold, he stands behind our wall; he is looking through the windows, gazing through the lattice. My beloved spoke, and said to me: ‘Rise up, my love, my fair one, and come away. For lo, the winter is past, the rain is over and gone. The flowers appear on the earth; the time of singing has come, and the voice of the turtledove is heard in our land. The fig tree puts forth her green figs, and the vines with the tender grapes give a good smell. Rise up, my love, my fair one, and come away!” (Song 2:8-13).

Could the seasonal cues in Song 2 denote a spring wedding for the “Good Shepherd” and His bride? They could. This is why it’s important to be watching not only in the summer or fall but during every season (Luke 21:36).

Could the endpoint of the timeline convergence this month portend an April Rapture? It could. In fact, in view of the typologies and our understanding of God’s 6,000-year plan, it’s difficult to imagine a more apt time for our redemption to occur than at the end of a jubilee year, in the spring, on a day few would expect, and just before Israel’s 70th anniversary.

What a thrilling possibility to consider!

Notice we say POSSIBILITY. Even though the above scenario is scriptural, there is still a certain amount of speculation involved: because Scripture is not explicit regarding the season or month of the Rapture, we can only hypothesize based on the types and patterns. Additionally, it goes without saying that when dealing with timelines and calendars there is a chance of misreckoning. Even in the case of a perfect reckoning, the overriding fact of the matter is that only God knows exactly when the Rapture will occur relative to the end of the age. This is why it’s a mistake to set dates or be dogmatic about timelines, regardless of how compelling a convergence of signs.

Even so, let us be encouraged that all signs point to the Lord being “at the door” (Matt. 24:33). What an awesome and glorious day it will be when He steps through and says, come up here!

1. Based on the genealogies in Scripture, biblical scholar D. Petavius calculates Creation to have occurred in 3,983 BC. Subtracting 3,983 years from 6,000 we arrive at 2018. See endnote #5 here for detailed calculation.

4. Israelis will observe the 70th anniversary of the rebirth of the Nation of Israel on April 20 (Iyar 5), this according to the modern pre-calculated Jewish calendar, which has Nisan 1 corresponding to March 17. As explained in my article “When is Nisan 1?”, however, there is good reason to believe that the true Nisan 1 in 2018 is the first new moon of April. An April Nisan 1 would put Israel’s 70th anniversary (Iyar 5) in May, close to the Gregorian anniversary date of May 14.

5. That Psalm 90:10 sets an upper limit of 80 years on a lifespan means one could also include the tribulation period in “all these things” described in Matthew 24.

They Exchanged THE TRUTH About God For a Lie and Worshiped and Served the Creatu...
A Cup Of Trembling ... A Burdensome Stone
Numbers That Are Getting My Attention
For My CERN Watchers!!