Close To Breaking The Seals Of The Title Deed?

I am sharing some video interviews of Dan Goodwin below that will explain just why the news in this blog could be prophetically important. However, there are so many calendars and so much confusion that we can’t be dogmatic. God’s timing is the one that matters and won’t know what the actual day is until we reach HIS time. Anyway, the information below is very intriguing.

The Sanhedrin have started counting the Jubilees again. Things that make one go hmmmm. Here is the news article:

Sanhedrin Revives 2,000-Year-Old Blessing for Counting of Jubilee Year {Click image to read article or scroll to end to read it} 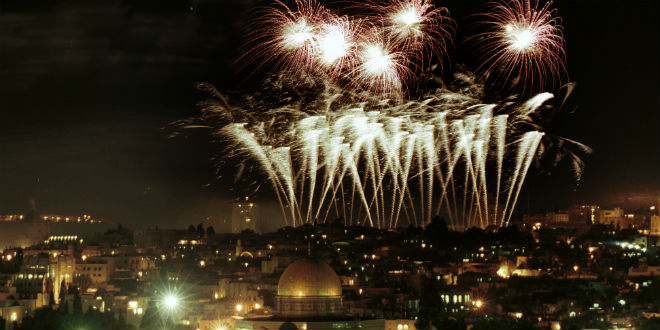 Let’s start by addressing the Jubilee via the Grace Thru Faith site of the late Jack Kelley. Following are some key excerpts from two of Jack’s articles he wrote. If you click on the highlighted title names you can read the full write up of each. These excerpts will give you a basis going into the videos below and help you appreciate just why the news article above is so key and packed with possible prophetic implications that point to the very possible closeness of the Tribulation starting. The time starts after the church is raptured (yes I’m Pre-trib remember? but stay and hear it out or you will miss out).

The key to the rapture is in Chapter 4 of Revelation with this verse: “After this I looked, and behold, a door standing open in heaven! And the first voice, which I had heard speaking to me like a trumpet, said, “Come up here, and I will show you what must take place after this.”” Then it tells of the throne room of God and what is going on before the scroll is brought out and presented in Chapter 5 of Revelation. Then onward to the events that unfold all the way up until Jesus comes back PHYSICALLY the second time. Chapter 5 of Revelation tells us that the lamb who is representative of Jesus is the only one worthy to receive and open the scroll. Then Tribulation begins when Jesus breaks the 7 seals of the scroll, which is the title deed to this Earth that he bought back ownership of with his own blood.

Now on to Jack’s excerpts:

Moses, Jesus, and the Rapture of the Church

Moses And The Messiah (A parallel)

Both mothers received supernatural indications that their yet unborn children would redeem their people. Both children were in mortal danger at the moment of birth and both parents sought protection in Egypt. Both later left their place of refuge to assume leadership of their people. As Moses spent 40 years in the desert of Midian, Jesus spent 40 days in the wilderness of Judea. As Moses led his people out of the bondage of Egypt into a new life in the Promised Land, Jesus will lead His people out of the bondage of sin into a new life in Heaven. As the people of Moses were protected in Goshen while the plagues of Exodus destroyed Egypt, the people of Jesus will be protected in Heaven as the plagues of Revelation destroy Earth.

The Year of Jubilee

The Jubilee Year is explained in Leviticus 25. Like the other Sabbaths (holy days) described there, it is a day set apart for both historical and prophetic fulfillment. Its exact timing is subject to controversy, due to confusion as how the years between Jubilees are reckoned. Most believe that Jubilee years can no longer be calculated.

To over simplify, every 50th year was a Jubilee year, and to commemorate that year the Israelites were to do three things.

First, recognizing that the land was really the Lord’s and they were but tenants, any land they had acquired since the last Jubilee had to be returned to the original family to whom the Lord had granted it. He clearly told them that His land could neither be bought nor sold (nor given away, as some point out relative to the current “land for peace” negotiations.)

By the way, an essential element of the Camp David Accord justifying the return of the Sinai Peninsula to Egypt was the fact that the Lord had never given it to Israel in the first place. Therefore it could be given back with out violating biblical laws.

In adding land to their holdings then, the Israelites were really only “buying” the number of harvests until the next Jubilee, so the “seller” was to price the transaction accordingly. If a family somehow lost their land through default or bankruptcy, it was up to the next of kin to buy it back immediately if he could. If not, it was returned anyway the next Jubilee year.

Second, all debts were to be forgiven. Any money owed you by another was to be written off, and the debt canceled. Same with money you owed.

In those days, if you incurred a debt and somehow became unable to pay, you enslaved yourself or a member of your family to your creditor to work off the balance. Thus the third provision of the Jubilee Year; all slaves were freed and returned to the family land.

The prophetic fulfillment should be obvious. One day soon, all the land called Planet Earth will revert to its only original owner, the one who created it. (Remember, our Father God created their Mother Nature). All the debts we owe to Him will be forgiven in fact as they have been in faith, and all the slaves (to sin) will be freed from that curse forever.

So when you pray, “Thy kingdom come, Thy will be done,” you’re really praying for that final and ultimate Jubilee year.~ End of SNIP

Disclaimer, I don’t always agree 100% with every thought of Dan’s but he has some excellent points to consider about Jubilee etc.

Now on to the video interviews:

WHEN GOD gave the Law to Moses, He decreed that every 50th year, the end of seven cycles of shmita (Sabbatical years), would be a Jubilee year. Debts would be cancelled, bond servants would go free, and land that had been sold reverted to its original owner. Evangelist Dan Goodwin, author of God’s Final Jubilee, says the Jubilee is exactly what God has in store when He returns to reclaim title to planet Earth.

Just want to clarify something about tithes that they talk about briefly before you watch this first video below. (They get back on topic about 8mins 35secs in.)

Q. This is a question about tithing. I have heard that if we don’t tithe a tenth of what we earn to God first then God will curse all of our money. Is this scriptural?

A. No it’s not. God did say that the Israelites were under a curse because they were neglecting to tithe. He was asserting His right to the first 10% of their increase, and said that their lack of prosperity was due to their failure to give it to Him.

But then He promised them blessings so great they wouldn’t be able to measure them if they started setting the tithe aside. (Malachi 3:9-10) So in effect, the curse of poverty was self imposed due to their lack of faithfulness in not believing His promise.

More specifically for us, in Galatians 3:13 Paul wrote that “Christ redeemed us from the curse of the Law by becoming a curse for us.” Because we’re washed in the blood of Jesus we cannot be cursed by failure to keep the law.

Generally, the Bible approaches the subject of tithing from the opposite perspective, promising us great blessings when we do tithe. A good example appears in Luke 6:38. “Give, and it will be given to you. A good measure, pressed down, shaken together and running over, will be poured into your lap. For with the measure you use, it will be measured to you.” God will always reward our generosity.

Tithing is the only area of our relationship with God in which He encourages us to test Him. “Test me in this,” says the LORD Almighty, “and see if I will not throw open the floodgates of heaven and pour out so much blessing that you will not have room enough for it.” (Malachi 3:10)

So, while we can’t be cursed for not keeping His laws, there are great blessings in store for those who do. Tithing is perhaps the most obvious example of this.

(In this video Dan says he believes that America is mystery Babylon. Maybe we are. Time will tell us more.)

* THE BATTLE FOR PLANET EARTH by Dan Goodwin

* The Scroll and the Lamb

We are that much closer to being raptured and to the beginning of the Tribulation…NOW is the time to be saved! TODAY because tomorrow may be too late! But that’s just me, or is it?

Here are some charts that will help you nutshell events to each set of seals, trumpets and bowls of the book of Revelation…Don’t be here for this get saved instead: 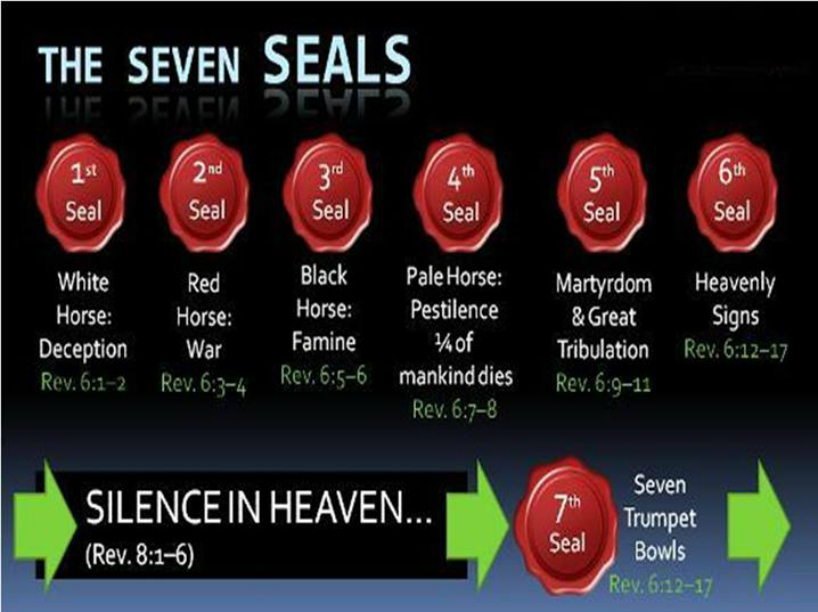 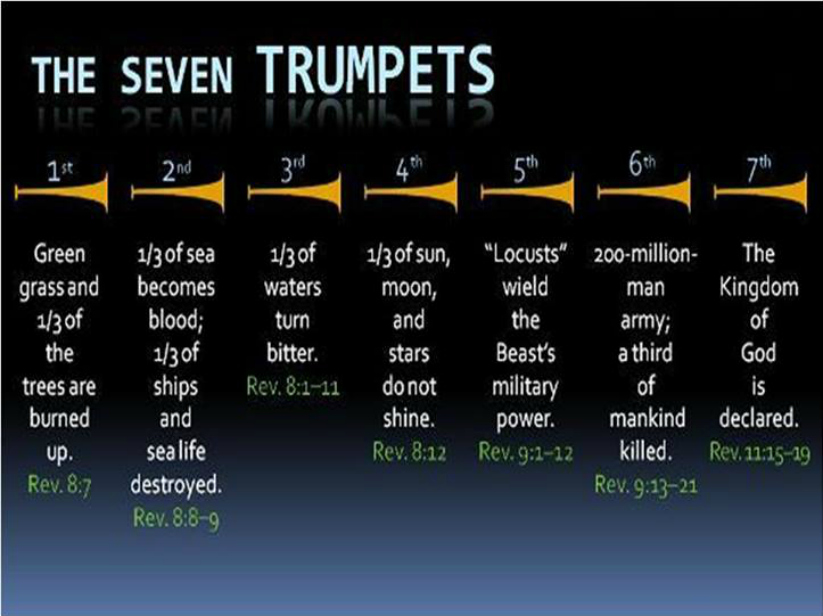 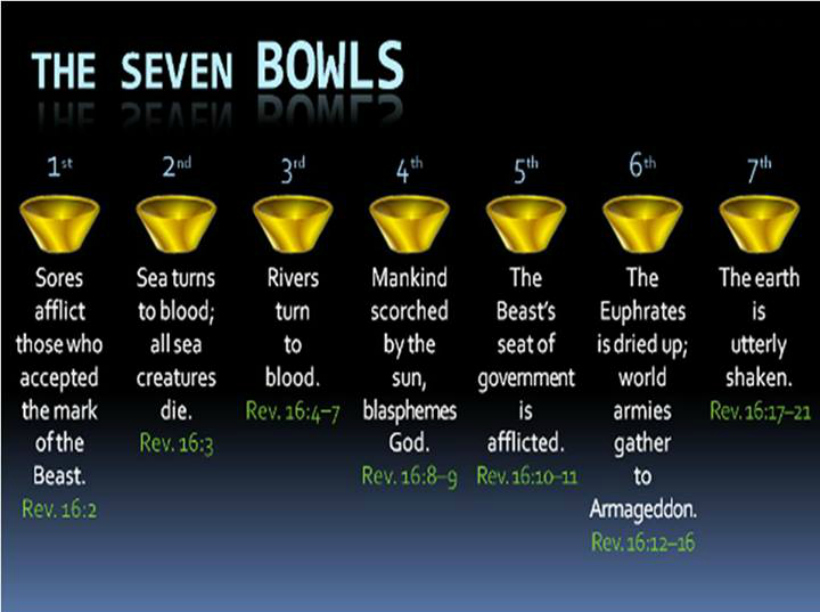