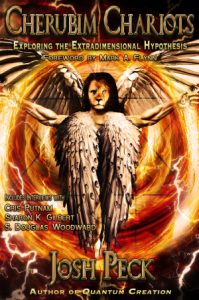 Cherubim Chariots written by Josh Peck at Ministudy Ministry is well worth the purchase and time to read. Josh has the knack of explaining what might come across as difficult subjects to tackle and makes them very easy to grasp as well as making it possible to have a working knowledge of for use and discussion. Not only does he have this knack, he also does it in a way that is not too overwhelming and in a short book format that is easy to read quickly leaving you anticipating his next book. In this book he explains the difference between inter-dimensional over extra-dimensional in ufology and how and why it differs from extraterrestrial. He also talks about how certain technology of mankind may have been received from fallen angels, is in use today and, expanding for future use based on old agendas of these beings. He helps to put the truth behind the fallacy of ancient astronaut theory by showing how the vehicles used may actually come from the extra-dimensional places rather than extraterrestrial and that those pilots of some of vehicles are actually the fallen angels and not what the classic ufologists may explain away. He also aptly explains the perspective of prophets of the Bible, such as Ezekiel, peering at the Cherubim from our dimension and explains the very possible reason of just why and how they are described the way they are. It’s fascinating! But that is only the tip of the iceberg of information he offers in this book. He has come across an extremely interesting find on Mount Herman, the place where Satan and the fallen angels who sided with him descended to intermingle with mankind and create giants and other altered beings that walked the Earth before God had to cleanse the Earth of the abominations via the flood, and makes a possible tie into Roswell and Nazca. This find could speculatively explain why Hitler used the hand symbol he used and, in my opinion, why we may be seeing the reemergence of the same socialist type government spreading globally for these end times. He has interviews with very noted people such as Cris Putnman, Sharon Gilbert, Doug Woodward and, the Afterward by Perelandra Kilns who used to maintain Watcher Vault website (home of the previous works of David E. Flynn as well as other invaluable postings). Not only that but, his foreword is by Mark A. Flynn author of another phenomenal book worth reading, Forbidden Secrets of The Labyrinth. Mark is the twin brother to the late David E. Flynn who had done some extraordinary investigative work on his own that Josh references throughout Cherubim Chariots so, if you are a fan of the late David Flynn this book will not disappoint! After reading the book and hearing a couple of Josh’s interviews it only makes me wish that David could have been here today just to be privy to the conversations these two would have had and the body of work they may have been able to do together. Please, do yourself a solid and buy this book as well as Josh Peck’s other books Disclosure (the updated version) and Quantum Creation. You will walk away with knowledge you thought may have been beyond your grasp and be amazed at how easy he makes it for all to understand!

Please take the time to hear his interview he did on The Hagmann & Hagmann show for a bit more on his book..It starts about 30mins in:

Israel's 70th Anniversary and The American Embassy Move To Jerusalem
Scoffers Will Come In The Last Days But, Keep On Your Watch!
Wake Up. The Time Is Here. It Is Now.
A Cup Of Trembling ... A Burdensome Stone