Billy Graham Passes Away At 99 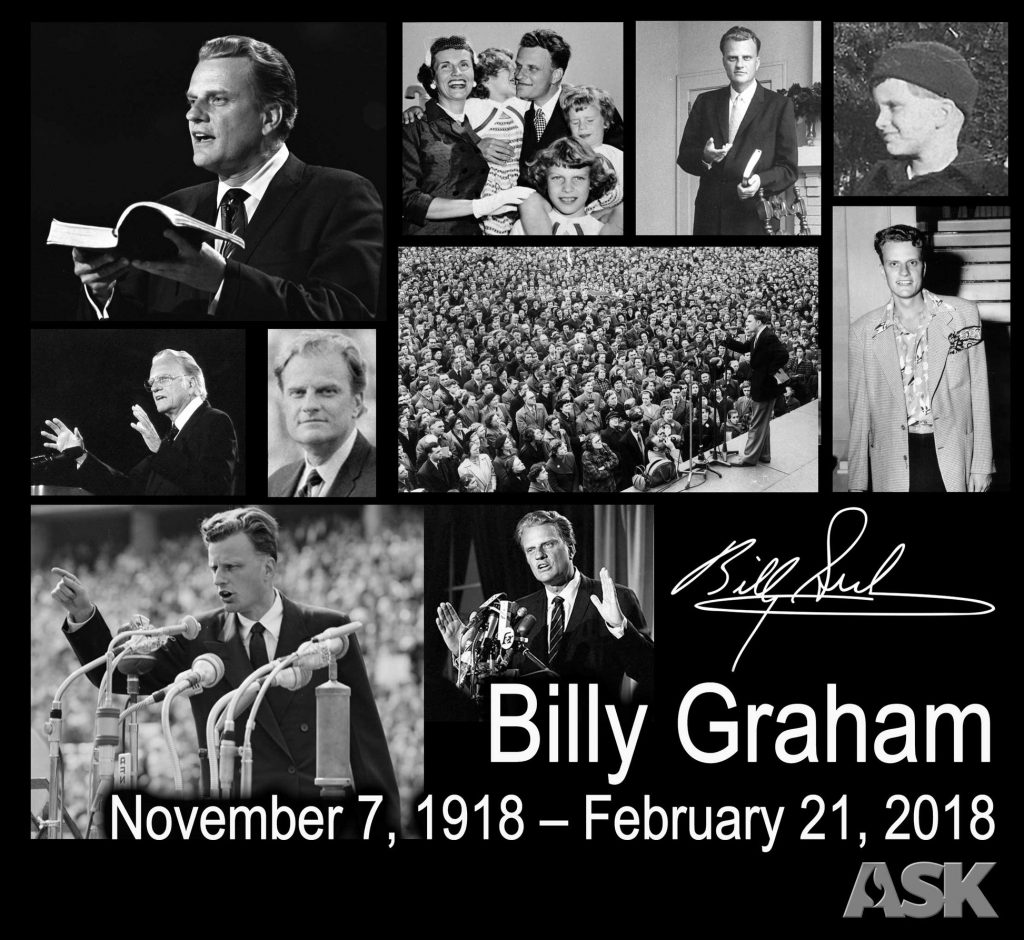 I want to share a few links for us to consider today upon the passing of Billy Graham. Things brought to my attention and memory because of it that I think you may also find intriguing and worth consideration. First off I will start by posting something for my  fellow “truthers” to consider before they cast judgment on this and before we stand before God himself soon.

Satan would never teach that the only way to God is through Jesus. Satan would never want any man to know that they needed to repent and accept that Jesus is God and came to this Earth as a man to take on our sins by dying in our place to save our souls. Satan would never push forward anyone that pushes the Gospel of Jesus! What Satan would do is use people to disparage those who do teach the Gospel. What Satan would do is to turn brothers and sisters against each other with the hope of breaking us apart and causing division by using pride and arrogance of thinking we are above others because we possess some unknown truth that others do not have. What Satan would do is make sure any truthers in the truther movement who are not saved will not even consider salvation by making those who do teach the Gospel of Jesus seem irrelevant and as if they are not true. God says to judge a man by the fruit he produces. How many people found Jesus and were saved because God led Billy Graham to teach them the truth? Any bad works that he may have done in his life because he is just a mere flawed human (as are we all) will be burned away in the fire but, what will stand and what will never change is that this man brought thousands to Jesus and introduced them to salvation.

Matthew 7:15-20 ~
“Beware of false prophets, who come to you in sheep’s clothing but inwardly are ravenous wolves. 16 You will recognize them by their fruits. Are grapes gathered from thornbushes, or figs from thistles? 17 So, every healthy tree bears good fruit, but the diseased tree bears bad fruit. 18 A healthy tree cannot bear bad fruit, nor can a diseased tree bear good fruit. 19 Every tree that does not bear good fruit is cut down and thrown into the fire. 20 Thus you will recognize them by their fruits.

Those that confess Jesus has come in the flesh and is the only way to heaven carry the spirit of God. Right below is Billy Graham’s last message to America he had given. God is the true judge of a mans heart and not any “truther”. So tell me, on that day we all stand before God, how many souls will you be able to rejoice with the Lord over having brought them to the moment of accepting his saving grace? This man is celebrating today finally in the presence of Jesus who he confessed of his WHOLE life in public and never altered that message. I think it would bode well to those who would come out to defile the work a man did for the Lord to be silent. But that’s just me. Rest in the arms of Jesus Billy and I pray comfort to and for his family!

1 John 4:2-4 ~
2 By this you know the Spirit of God: every spirit that confesses that Jesus Christ has come in the flesh is from God, 3 and every spirit that does not confess Jesus is not from God. This is the spirit of the antichrist, which you heard was coming and now is in the world already. 4 Little children, you are from God and have overcome them, for he who is in you is greater than he who is in the world.

“Let those who have spiritual ears to hear: HEAR what the Holy Spirit and the Spirit of THE LORD Yeshua, the Lord Jesus Christ is saying to the seven churches…” A Vital Message from the heart of Billy Graham near the very end of his life. Spoken on his birthday, aged 95 years.”

This man taught the truth of the ONLY way to the father is salvation in Jesus all his life and in all these places….Stand down unless you can match this record of work for the Lord…: 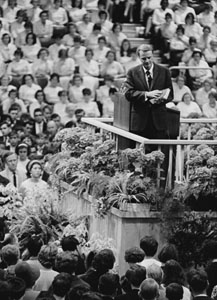 To top it all off, the Gospel of Jesus is being widely talked about today and here it is below being spread over the airwaves via the Today Show because this man who followed Jesus all his life and spread his message of how to be saved passed away today. It has nothing to do with the vessels being used but has to do with the spirit of God. Is this a final push to be saved? A final warning of salvation before judgment falls or, is it simply a refreshing of this very urgent and important message of the only true important decision you will ever make in life? Either way, it is being openly talked about today. Just something to make us think and go hmmmm.

Acts 4:11-12 ~
This Jesus is the stone that was rejected by you, the builders, which has become the cornerstone. 12 And there is salvation in no one else, for there is no other name under heaven given among men by which we must be saved.”

Romans 10:8-11 ~
But what does it say? “The word is near you, in your mouth and in your heart” (that is, the word of faith that we proclaim); 9 because, if you confess with your mouth that Jesus is Lord and believe in your heart that God raised him from the dead, you will be saved. 10 For with the heart one believes and is justified, and with the mouth one confesses and is saved. 11 For the Scripture says, “Everyone who believes in him will not be put to shame.”

All that ^^^ aside, there are more things to think about and consider….

PROPHECY ALERT!!! SIGN OF THE RAPTURE: Billy Graham Is Called Home (Part of Steve’s video he posted in 2013 via Melissa at Midnight Hour’s YouTube)

From prophetic words received by many, it appears Pastor Billy Graham is the Methuselah of the Church Age. Stephen Ben Denoon [Israeli News Live] share a PROPHETIC DREAM published on MAY 19, 2013 regarding Billy Graham’s death and the Church Rapture. TIME IS UP!!!!!!

” I still have no reason to believe that the Rapture will take place before Brother Billy Graham is called home. The one and only time I have heard the Lord’s audible voice was in 2008 when I felt that I heard Him tell me, “Shortly after I call Billy Graham home, I will come for my people”. I want to emphasize that this was an experience that I personally had. In all of my beliefs and when speaking to people about my faith and my eschatological writings I emphasize the concept of “Sola Scriptura”, or Scripture alone. By this I mean that my doctrine is founded on what I read in the Bible, and not any experiential event . But, just as there were people on earth when the Lord came the first time who were told they would not die before seeing Him, I believe that it is certainly possible that He can give us personal revelation on His second coming, also.

So, stay tuned, and Maranatha!”

{ FYI and a disclaimer: I found that ^^ HERE in a search of an old archive on 5 Doves website. There is another by Benny Hinn out  there that I won’t share because frankly, I have and have had a gut feeling about him that does not sit right and it is possible that he may have heard this information before or from another source and claimed it as his own. I absolutely have no proof of that and that is just my personal opinion. It’s just my choice to avoid Benny Hinn. Also, any dreams or visions or personal experiences I share on my blog by others are to be taken with discernment and should be used as interest for speculation only unless the Lord leads you otherwise. Pray always and use discernment on these matters.}

Some things to read via Unsealed:

* Billy Graham Passes Away At The Age Of 99

* Billy Graham Turns 99 And Other News

An excellent article by Chuck Missler at Koinonia House as we consider Methuselah:

* The Gospel in Genesis

A snippet from the article:

In our Bible, we read the Hebrew names. What do these names mean in English?

Now let’s put it all together:

Man (is) appointed mortal sorrow; (but) the Blessed God shall come down teaching (that) His death shall bring (the) despairing rest.

Here’s the Gospel hidden within a genealogy in Genesis!

Look up people! Jesus is coming soon in the clouds for his church and 7 years after that he will come back physically to this Earth and he will reign and rule. Where will you be? Will you be with Jesus as his people or will you be with Satan and his? The choice is yours. You have control over where you spend eternity by making your choice.

Look At What Our "American Heroes" Are About To Do For Us...
Conditioning, It Works. And, It's In Plain Sight For Those With Eyes To See!
Trump's Peace Plan
The Shemitah DID NOT Happen As Expected…Why?