Beware Of The Noahide Laws 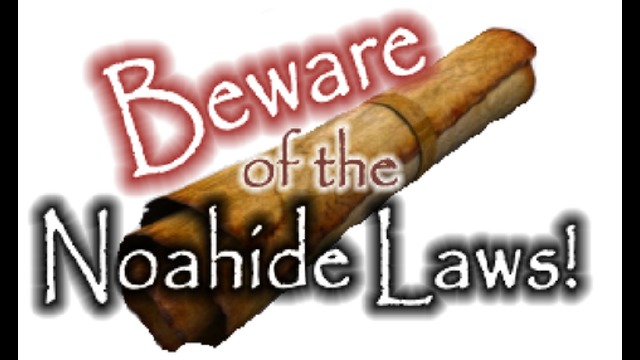 Ok…This is a difficult one for me and I have had some gut wrenching days looking into this and learning more and more disturbing things of it each day that I do. The deception of the Noahide Laws. I have no words. I decided to just present the information for you to look into further. I would adjure you to not give in to cognitive dissonance however tempting it may be to bury up underneath the comfy cover of it. This may in fact end up being the Tribulation government and religious system we are talking about. The Sanhedrin Pharisaical religion that killed the prophets and the followers of Jesus and Jesus himself. There is nothing new under the sun. Why would they not be the ones to kill the mayrters in the Tribulation as well? It is very plausible and worth our time to look into the matter further. I can see how confused those left behind would be if this is the case. Please watch each video below. This does not make one antisemitic. God is not finished with Israel that is abundantly clear. He loves them. He loves the Jews and he will call them back out of this deception during the 7 year Tribulation. Those facts do not and will not ever change. Please do your due diligence and just be alert and aware. That is all I am asking. YES! Pray for Israel, Pray for the peace of Jerusalem and pray for the Jews to be saved and the blinders to be removed off their eyes so that they will recognize the TRUE Messiah as Jesus!

*NOTE: I took the video down that had Lorraine Day in it. I was just now able to listen to the full show and while there are some things I would agree with her on she does not have a correct grip on her Biblical exegesis. It would only cause confusion to what this post is about. I want people to look into the Noahide Laws, learn the truth about them, and dig deeper on their own. I do not want people to be influenced or confused by someones improper understanding of God’s word. This is MY opinion on it so I took that one down. The other videos offer excellent information even though I am not always 100% on board with what Steven or his wife say either on some occasions such as some political matters. Please do not be distracted by the minor issues and over look the bigger picture.*

1 Then Jesus said to the crowds and to his disciples, 2 “The scribes and the Pharisees sit on Moses’ seat, 3 so do and observe whatever they tell you, but not the works they do. For they preach, but do not practice. 4 They tie up heavy burdens, hard to bear, and lay them on people’s shoulders, but they themselves are not willing to move them with their finger. 5 They do all their deeds to be seen by others. For they make their phylacteries broad and their fringes long, 6 and they love the place of honor at feasts and the best seats in the synagogues 7 and greetings in the marketplaces and being called rabbi by others. 8 But you are not to be called rabbi, for you have one teacher, and you are all brothers. 9 And call no man your father on earth, for you have one Father, who is in heaven. 10 Neither be called instructors, for you have one instructor, the Christ. 11 The greatest among you shall be your servant. 12 Whoever exalts himself will be humbled, and whoever humbles himself will be exalted.

29 “Woe to you, scribes and Pharisees, hypocrites! For you build the tombs of the prophets and decorate the monuments of the righteous, 30 saying, ‘If we had lived in the days of our fathers, we would not have taken part with them in shedding the blood of the prophets.’ 31 Thus you witness against yourselves that you are sons of those who murdered the prophets. 32 Fill up, then, the measure of your fathers. 33 You serpents, you brood of vipers, how are you to escape being sentenced to hell? 34 Therefore I send you prophets and wise men and scribes, some of whom you will kill and crucify, and some you will flog in your synagogues and persecute from town to town, 35 so that on you may come all the righteous blood shed on earth, from the blood of righteous Abel to the blood of Zechariah the son of Barachiah,[f] whom you murdered between the sanctuary and the altar. 36 Truly, I say to you, all these things will come upon this generation.

Here are 4 of several more that Steven Ben DeNoon and his wife did on The Noahide laws below. Please check out his YouTube site for the rest. They are doing a series on it.

Beware of Noahide laws : Steven and Jana Chat Feb 21,2019 (Video is working just click on it)

Beware of the Leaven of the Pharisees

Ty Green is also in the process of doing a series on this as well. Here is the 2nd video he has done below. Please check out his YouTube site daily to see the rest that he puts up on this. I will be checking it daily myself.

The Noahide Laws: A Look At The Bill That Became Law

I also stumbled across information that the Noahide laws have roots in Freemasonry. And if you have followed my blog you know about Freemasonry. Check out these captured images of the book “The History of Freemasonry”. Bear in mind, per the info we learned above, The 7 Noahide Laws were snuck through Congress in 1991. The 400 plus Congressmen were told there was nothing left to vote on that day and they should go home, 4 Congressmen stayed behind and passed a bill unanimously (so there names were not recorded) to honour the birthday of Rabbi Menachem Mendel Schneerson (a highly respected Rabbi thought to be the Messiah) concealed in this bill were the 7 Noahide Laws. These 4 nameless criminals enshrined into US Law the 7 Noahide Laws as the basis of our civilisation (instead of the 10 commandments. The 7 Noahide Laws are not mentioned in the Bible they come from the Babylonian Talmud, the penalty for breaking any of them is death by beheading, Worshipping Jesus contravenes the Noahide law of Idolatry in the Talmud. Now take a look at these page snaps below…. 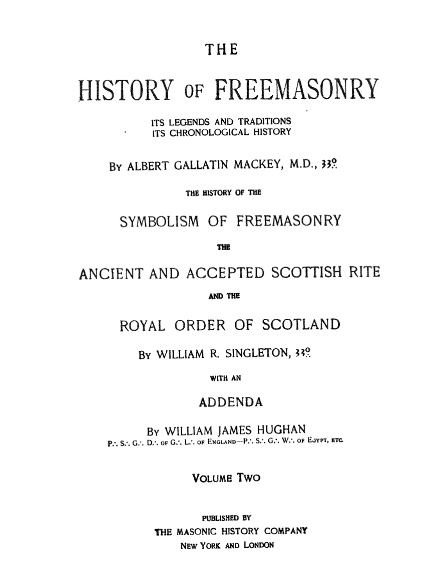 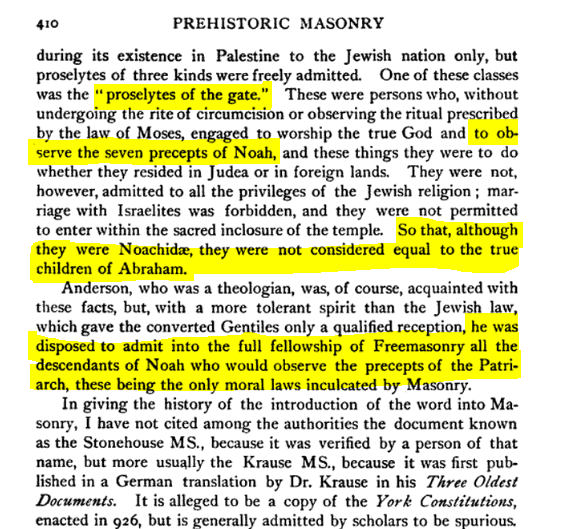 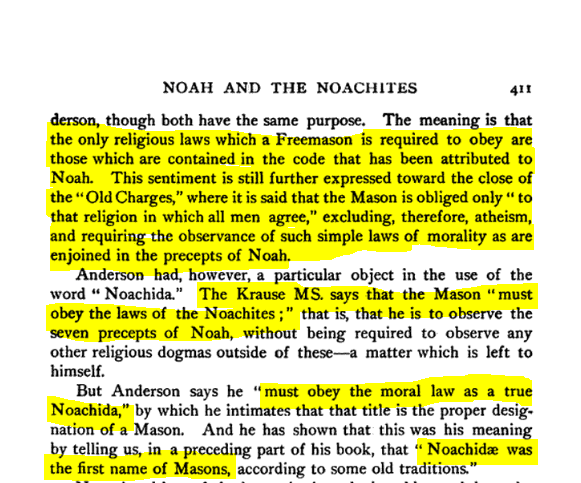 Here is a montage of Presidents signing the Noahide Laws into recognition on Education and Sharing Day…If you go online you can find more images and information on your own. 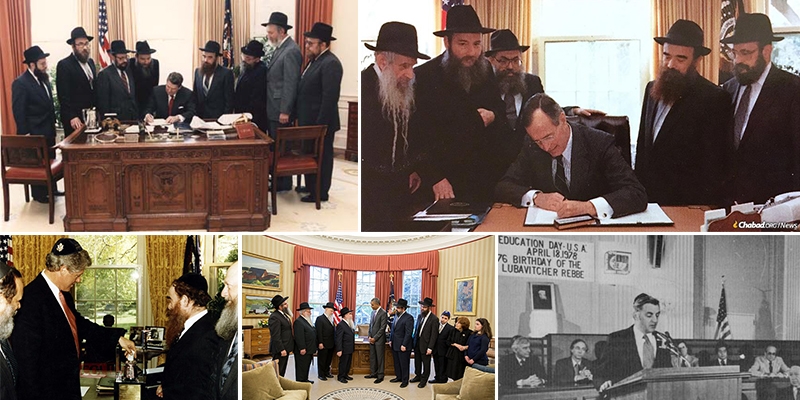 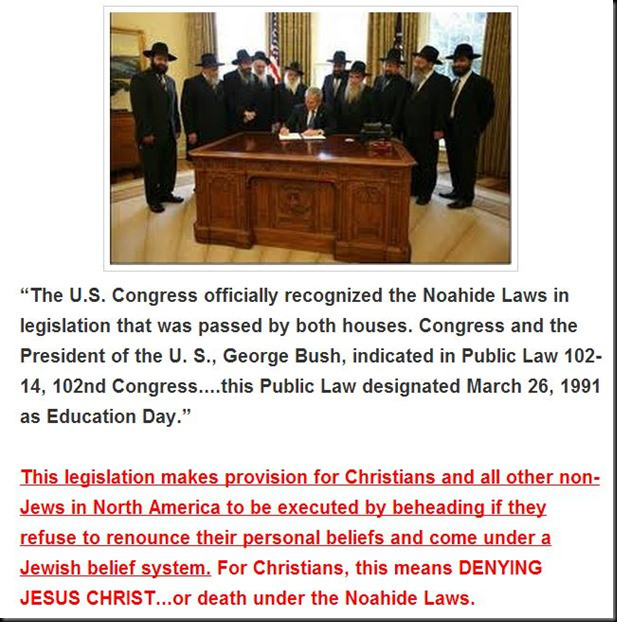 1 Then I saw an angel coming down from heaven, holding in his hand the key to the bottomless pit and a great chain. 2 And he seized the dragon, that ancient serpent, who is the devil and Satan, and bound him for a thousand years, 3 and threw him into the pit, and shut it and sealed it over him, so that he might not deceive the nations any longer, until the thousand years were ended. After that he must be released for a little while.

4 Then I saw thrones, and seated on them were those to whom the authority to judge was committed. Also I saw the souls of those who had been beheaded for the testimony of Jesus and for the word of God, and those who had not worshiped the beast or its image and had not received its mark on their foreheads or their hands. They came to life and reigned with Christ for a thousand years.

Recent Soft Disclosure...Strong Delusion...Do Not be Deceived!
What is The New Age & Age of Aquarius? The Truth?!
How Can A Global Conspiracy Work?
Quantum Computing and The Mandela Effect