Better Board The “Jesus Freaks” Bus Before It’s Too Late! 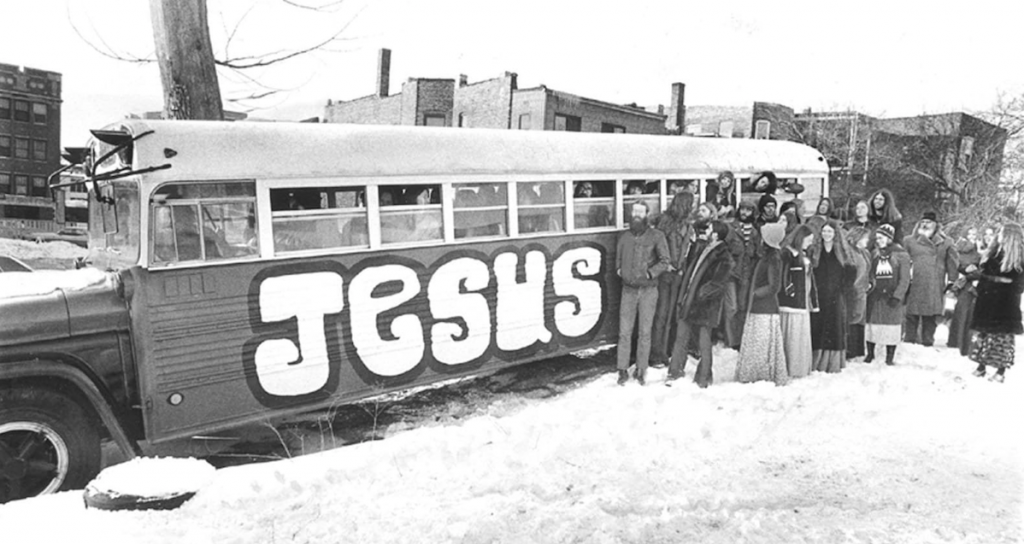 Besides today’s letter being brought to you by the letter “B” (That’s an American kid’s television show reference for my visitors from other countries). I want to say I nicked that image above from a blog site article I will share with you below. Why? because it’s super cool to me and I love the feeling it gives me. I was a child in the 70’s and a teenager in the 80’s and this image gives me a nostalgic feeling. It was during the time that people were waking up and getting on board with Jesus right at the end of the free love 60’s. During that time a book came out by Hal Lindsay called “The Late, Great Planet Earth” and it really shook some awake to the nearness of the end times. Not only that it also gave us some decent tunes.

“Grace to you and peace from him who is and who was and who is to come, and from the seven spirits who are before his throne, 5 and from Jesus Christ the faithful witness, the firstborn of the dead, and the ruler of kings on earth. To him who loves us and has freed us from our sins by his blood 6 and made us a kingdom, priests to his God and Father, to him be glory and dominion forever and ever. Amen.” ~ Revelation 1:4-6

I of all people know that the “fringe” things I share or post about are relevant to the coming Antichrist government and religious system. I also know that not only Satan but, the fallen angels that rebelled with him, will play major roles in the 7 year tribulation. They will use what they have to wow, confuse and deceive the masses left behind after the removal of those who truly follow and have accepted Jesus for their salvation. These “fringe” and sometimes controversial topics are important to know and be familiar with to help believers understand the confusing things we see happening in our world that to us, make absolutely no sense at all. They are also important to talk about and introduce to unbelievers for a whole other major reason that I will mention below. However, conspiracy theories or conspiracy truths aside, the most urgent message and point to get across to every living soul on this planet is that Jesus is about to return SOON! Also, if you have been sitting on the fence and not making a choice to accept his free gift of salvation and be saved, NOW is the time to do that!

I read a pretty awesome and short article today and even though the whole of the article is important to take in, this line stood out to me because it is key to most of my own postings and why I do them (emphasis is mine):

“We believe Christ’s return is close and that someone on the current world stage will become the AC and so we offer some bios on various present day world leaders, perhaps this will help someone in the troubled period that is to come.”

Besides the obvious fact that I want everyone to come to the saving knowledge of Jesus and to know, trust and love God, there are those who simply will not until the bitter end. There or those you try to convey this message to who would look at you like there is a dried piece of food stuck on your face somewhere and it has them so hypnotized that they can not or simply will not hear what you have to say. Those people will at the least have the information I have provided along with the work of those at the links I have shared. That information can and possibly will help those who are left behind after the rapture. They will hopefully and finally be able to see the false government and false religious system for what it is at last. Prayerfully these people will not succumb to the many disasters that will occur in that time or get caught up in the strong delusion before they turn to Jesus to save them. There will be those who will be saved during the Tribulation but believe me, you do not want to be in it and attempt that. Those who do will have to work on keeping faith of their salvation. It will be tenuous, hard, exhausting and at times terrifying. The Holy Spirit will not indwell the believers at that time as he does now for the body of Christ. He will operate on the outside as he did during the Old Testament times. I can’t say it enough, you just don’t want to attempt that.

My prayer and God’s will is that all would do that NOW and not subject themselves to God’s necessary cleaning up of evil and wickedness as well as the coming battle between God and his enemy Satan and Satan’s army of fallen comrades (angels and other fallen life forms). Change your way of thinking and turn from it. Your ticket is to believe and accept Jesus. Do it today because the bus won’t stay idle long it’s about to leave!

As it is said, “Today, if you hear his voice, do not harden your hearts as in the rebellion.” ~ Hebrews 3:15

Here is that article I read: Distortion and Camouflage

And below are more links to other awesome and informational articles and to a few sites that are key to visit in these short short days leading to Jesus coming first for his body in the rapture and then again physically 7 years later after the Tribulation is done.  “Therefore you also must be ready, for the Son of Man is coming at an hour you do not expect.” ~  Matthew 24:44

SIGNS OF THE END(Watch For The Day)

Some Jesus Movement Tunes to check out. They range from early 70’s to the early 80’s…Click around to listen to some. I’m sure you will find at least one of them you like. If not, at least you took the brief nostalgic tour and got a taste of the movement:

Click on the image below to read a MUST READ article I enjoyed about that “Christian Woodstock”. It has a couple of clip videos in it. The concert included Johnny Cash, Kris Kristofferson, Randy Matthews, Larry Norman & Andrae Crouch just to name a few. 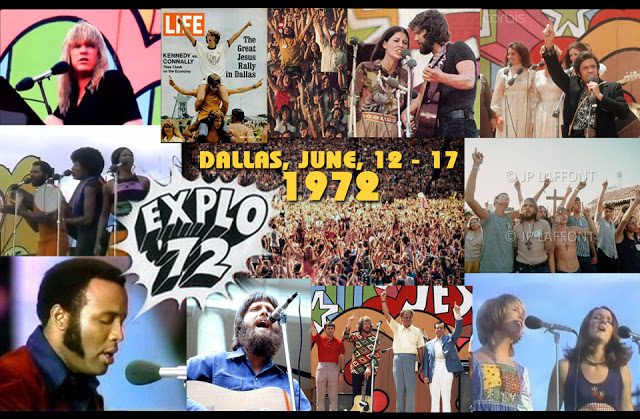 Johnny Cash’s video from the above link had been removed by the original poster at YouTube but, it is here along with more music and sights of Explo ’72 for those interested:

I hope you enjoyed the show, time to get on that bus now…. 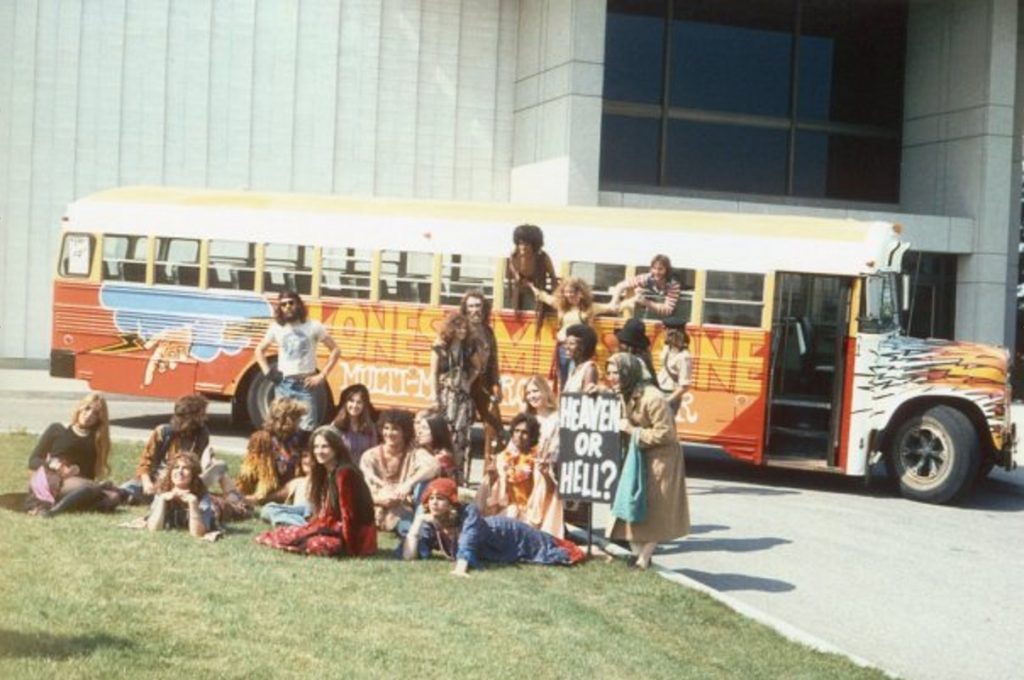 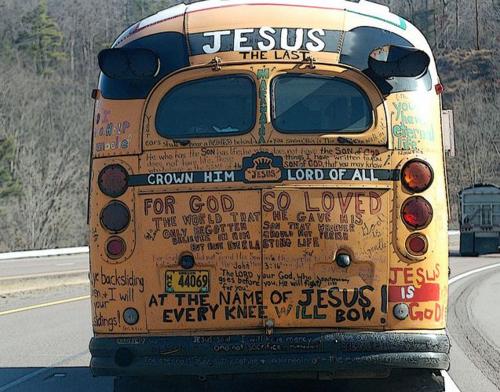 Consarnit another video to disCERN about CERN
Did the Pre-Trib Rapture Doctrine Begin With John Darby?
Pre-Tribulation Rapture...It Doesn't Get Clearer Than This
RAPTURE In AUGUST 2021?