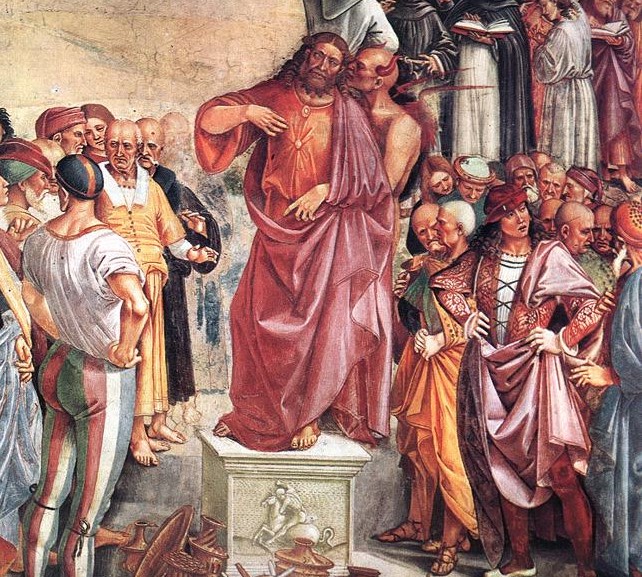 Sermon and Deeds of the Antichrist, Luca Signorelli (1499)

And they asked him, saying, Master, but when shall these things be? and what sign will there be when these things shall come to pass? And he said, Take heed that ye be not deceived: for many shall come in my name, saying, I am Christ; and the time draweth near: go ye not therefore after them. ~ Luke 21:7-8

I’m not the only one with my eye on the charming prince as a possible antichrist candidate. It does not mean he is. We can’t be dogmatic about any candidate but, he is interesting to say the least. I don’t usually focus on the antichrist but, here is a NEED to see and consider video done by Minute To Midnight. It is extremely interesting and has quite a few things to consider in it. I had looked into this a bit on my own but they put the majority of it in one video. Something to consider first before you watch.

Q: Will the anti-Christ be a homosexual according to Daniel 11:37? If he is a Muslim, that lifestyle will not be accepted. What are your thoughts?

A: Some people use the King James version of Daniel 11:37 to claim the anti-Christ might be a homosexual. I prefer the NIV translation of the verse. It reads, “He will show no regard for the gods of his fathers or for the one desired by women, nor will he regard any god, but will exalt himself above them all.” This makes more sense in the context of the verse which deals with the anti-Christ’s lack of respect for other gods and his claim to be greater than all of them. To me, inserting a comment about his sexual preferences in the middle of the verse doesn’t make sense and I don’t believe the King James translators intended for it to be read that way. I believe “the one who is desired by women” is a reference to the Lord. Traditionally it was every Jewish woman’s desire to be chosen to give birth to Israel’s Messiah.

Embracing ALL religion and saying they all are right is showing absolutely NO regard for the god you follow. What did Jesus say? Jesus said to him, “I am the way, and the truth, and the life. No one comes to the Father except through me.” ~  John 14:6

That means as a follower of Jesus in order to have regard for him I must adhere to what he teaches and he teaches that HE is the only way to the Father. HE is the only God. To embrace another way is showing no regard for him. To say it is ok to embrace other ways is deceitful not only to him but to those who you would want to lead to him for salvation. It is not being honest or showing the true way to salvation. So, if one comes and says embrace all religions then that person is not regarding his god or the god of his fathers if he practices as his fathers did before him. In their eyes, the new world order / future antichrist kingdom, that would make me or anyone who holds to the way, the truth, and the life as Jesus and Jesus ONLY as an extremist. You can see the set up. You can see why those who call on the name of Jesus will be beheaded or killed any various ways in the Antichrist kingdom.

Then I saw thrones, and seated on them were those to whom the authority to judge was committed. Also I saw the souls of those who had been beheaded for the testimony of Jesus and for the word of God, and those who had not worshiped the beast or its image and had not received its mark on their foreheads or their hands. They came to life and reigned with Christ for a thousand years. ~ Revelation 20:4

This clock is ticking and the Tribulation is at hand. Accept Jesus TODAY and don’t put it off!

Of interest because of Zechariah 11:17 which says that the Antichrist will have a damaged right eye and arm. “Woe to the idol shepherd that leaveth the flock! the sword shall be upon his arm, and upon his right eye: his arm shall be clean dried up, and his right eye shall be utterly darkened.”  I’ve often taken this to mean the effects of the assassination during the middle of the Tribulation. If he is the Antichrist, and he in fact is alive and well then it could be mere conditioning for a future event? Or, since this is still all just speculation because at this point that is all we can do, he is not the guy after all. In any event, he and all in the above video play a major role in these end of days to set up the Antichrist kingdom including the president of France, Emmanuel Macron. They are setting the Antichrist kingdom up whether they are in on it and know it or not.

Then if any man shall say unto you, Lo, here is Christ, or there; believe it not. For there shall arise false Christs, and false prophets, and shall shew great signs and wonders; insomuch that, if it were possible, they shall deceive the very elect. Behold, I have told you before. Wherefore if they shall say unto you, Behold, he is in the desert; go not forth: behold, he is in the secret chambers; believe it not.  For as the lightning cometh out of the east, and shineth even unto the west; so shall also the coming of the Son of man be. ~ Matthew 24:23-27

You have GOT to read this blog post my friend Geri did at her blog site!! She finds an extremely interesting tie of Jewish roots to the Saudi Royal family!! Plus she has some extra must see videos at the bottom of her write up on this. Check out her post at link below:

Of added interest upon looking into this further:

History of the Jews in Saudi Arabia

Snip: The first mention of Jews in the areas of modern-day Saudi Arabia dates back, by some accounts, to the time of the First Temple. Immigration to the Arabian Peninsula began in earnest in the 2nd century CE, and by the 6th and 7th centuries there was a considerable Jewish population in Hejaz, mostly in and around Medina, in part because of the embrace of Judaism by such leaders as Dhu Nuwas (who was very aggressive about converting his subjects to Judaism, and who persecuted Christians in his kingdom as a reaction to Christian persecution of Jews there by the local Christians and Abu Karib Asad.[1] According to Al-Masudi the northern part of Hejaz was a dependency of Kingdom of Judah[2], and according to Butrus al-Bustani the Jews in Hejaz established a sovereign state[3]. The German orientalist Ferdinand Wüstenfeld believed that the Jews established a state in northern Hejaz. MORE at LINK

Snip: As a result of this incredible find, archaeologists have drawn two conclusions: a significant Christian community existed in the area that is now Yemen and Saudi Arabia, and the region that gave birth to Islam was a Jewish Kingdom.

This, in itself, does not challenge any previous beliefs. It is well-known that there were many Jews in the region at the time of Muhammad and the Koran chronicles them.

A prime example was Medina, the second holiest city in Islam, founded and settled by Jews, which some say occurred after the first destruction of Jerusalem. This is a claim many Islamic scholars refute, saying the Jewish presence in Medina was negligible. According to the Koran, Muhammad initially had warm relations with the Jews, incorporating many Jewish practices into his religion, including praying towards Jerusalem. This turned into malevolence when the Jews challenged and ridiculed him. Muhammad’s rage was incensed and his newly found outright hatred for the Jews led him to lay siege to the city, killing the men and enslaving the women. In a lesson relevant to current events, the Jews surrendered without a fight after internal disputes divided them. MORE at LINK

After the destruction of the Temple, the Jews fled to Arabia

Snip: Although the fact is little recognized, more than one historian has affirmed at the Arab world’s second holiest city, Medina, was one of the allegedly “purely Arab” cities that actually was first settled by Jewish tribes.” Bernard Lewis writes:

The city of Medina, some 280 miles north of Mecca, had originally been settled by Jewish tribes from the north, especially the Banu Nadir and Banu Quraiza. The comparative richness of the town attracted an infiltration of pagan Arabs who came at first as clients of the Jews and ultimately sucqeeded in dominating them. Medina, or, as it was known before Islam, Yathrib, had no form of stable government at all. The town was tom by the feuds of the rival Arab tribes of Aus and Khazraj, with the Jews maintaining an uneasy balance of power. The latter, engaged mainly in agriculture and handicrafts, were economically and culturally superior to the Arabs, and were consequently disliked…. as soon as the Arabs had attained unity through the agency of Muhammad they attacked and ultimately eliminated the Jews.13 MORE at LINK

MORE HERE from the site: History of Israel, from 1850-present:

Billy Graham Passes Away At 99
Is "The Yanuka" Rav Shlomo Yehudah Beeri The Jews Awaited Messiah? Short Answer,...
Are You Watching?
The Afterlife...When We Die It's Not The End. It's Just The Beginning.