A Man Of Sorrows…Pierced For Our Transgressions 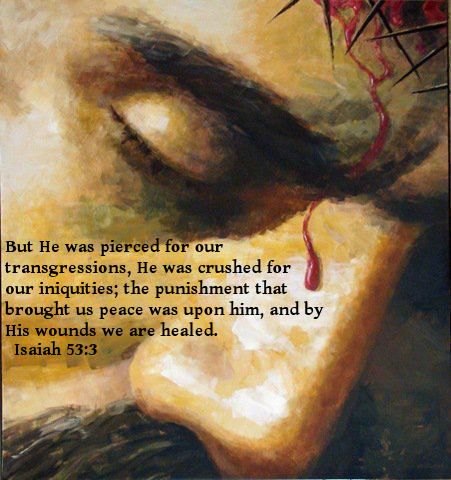 Who has believed what he has heard from us?
And to whom has the arm of the Lord been revealed?

He was despised and rejected by men,
a man of sorrows and acquainted with grief;
and as one from whom men hide their faces
he was despised, and we esteemed him not.

Surely he has borne our griefs
and carried our sorrows;
yet we esteemed him stricken,
smitten by God, and afflicted.

But he was pierced for our transgressions;
he was crushed for our iniquities;
upon him was the chastisement that brought us peace,
and with his wounds we are healed.

All we like sheep have gone astray;
we have turned—every one—to his own way;
and the Lord has laid on him
the iniquity of us all.

By oppression and judgment he was taken away;
and as for his generation, who considered
that he was cut off out of the land of the living,
stricken for the transgression of my people?

And they made his grave with the wicked
and with a rich man in his death,
although he had done no violence,
and there was no deceit in his mouth.

Out of the anguish of his soul he shall see and be satisfied;
by his knowledge shall the righteous one, my servant,
make many to be accounted righteous,
and he shall bear their iniquities. 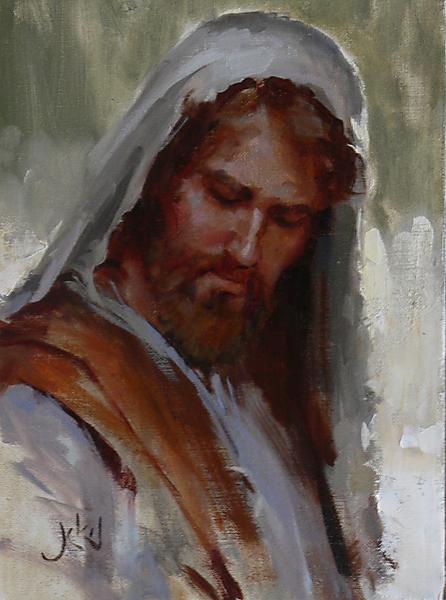 My God, my God, why have you forsaken me? Why are you so far from saving me, so far from the words of my groaning? O my God, I cry out by day, but you do not answer, by night, and am not silent. Yet you are enthroned as the Holy One; you are the praise of Israel. In you our fathers put their trust; they trusted and you delivered them. They cried to you and were saved; in you they trusted and were not disappointed.

But I am a worm and not a man, scorned by men and despised by the people. All who see me mock me; they hurl insults, shaking their heads: “He trusts in the LORD ; let the LORD rescue him. Let him deliver him, since he delights in him.” Yet you brought me out of the womb; you made me trust in you even at my mother’s breast. From birth I was cast upon you; from my mother’s womb you have been my God.

Do not be far from me, for trouble is near and there is no one to help. Many bulls surround me; strong bulls of Bashan encircle me. Roaring lions tearing their prey open their mouths wide against me. I am poured out like water, and all my bones are out of joint. My heart has turned to wax; it has melted away within me. My strength is dried up like a potsherd, and my tongue sticks to the roof of my mouth; you lay me in the dust of death. Dogs have surrounded me; a band of evil men has encircled me, they have pierced my hands and my feet. I can count all my bones; people stare and gloat over me. They divide my garments among them and cast lots for my clothing.

But you, O LORD, be not far off; O my Strength, come quickly to help me. Deliver my life from the sword, my precious life from the power of the dogs. Rescue me from the mouth of the lions; save me from the horns of the wild oxen.

I will declare your name to my brothers; in the congregation I will praise you. You who fear the LORD , praise him! All you descendants of Jacob, honor him! Revere him, all you descendants of Israel! For he has not despised or disdained the suffering of the afflicted one; he has not hidden his face from him but has listened to his cry for help.

From you comes the theme of my praise in the great assembly; before those who fear you will I fulfill my vows. The poor will eat and be satisfied; they who seek the LORD will praise him- may your hearts live forever! All the ends of the earth will remember and turn to the LORD , and all the families of the nations will bow down before him, for dominion belongs to the LORD and he rules over the nations.

All the rich of the earth will feast and worship; all who go down to the dust will kneel before him- those who cannot keep themselves alive. Posterity will serve him; future generations will be told about the Lord. They will proclaim his righteousness to a people yet unborn- for he has done it.

What an incredible psalm! 1000 years before the actual event, the Lord had David tell us what it’s like to be crucified. And to make sure we get the point, He had David open with the Lord’s first words from the cross and close with His last. (You have to read both Psalm 22:31 and John 19:30 in the Greek to see the last one. The Greek word is tetelestai, and it can mean it is finished, he has done it, or my favorite, paid in full.)

Psalm 22 is also the one most frequently quoted in the New Testament. It’s filled to overflowing with references to events at the cross and beyond, events the writers used to demonstrate the Lord’s fulfillment of prophecy. You see, it isn’t the miracles that make our Lord unique and worthy of our trust. Others, both before and after the Lord’s earthly ministry have performed great miracles. It’s the fact that nearly every important detail of His life was foretold, hundreds and even thousands of years before His birth. He is the One Who was promised, the Lamb of God Who takes away the sins of the world.

Counting Psalm 22 there are over 300 Old Testament prophecies, all of them a matter of public record hundreds of years before the fact, predicting the birth, life, death, and resurrection of Jesus the Christ. The abundance and specificity of these prophecies demolish any notion of chance, exceed the requirements of statistical analysis, and prove more conclusively than any other fact of history that Jesus is the Son of God. In fact, there is more hard evidence to prove that He is Who He claims to be, than there is that you are who you claim to be.

This is the unique and truly beautiful thing about the Bible. It stands alone among the so-called Holy Writings of the world, in its self-validating ability. Only the Bible tells the future with 100% accuracy. Our Lord knew we would be skeptical, unbelieving children. So early on, He began telling us things in advance of their occurrence so when what He said came true, we would be willing to believe Him. In this way, we can be assured that our faith is justified. By now He has a track record nearly 6000 years long. He has simply never lied about things. Ever. Hear it from His own lips.

I make known the end from the beginning, from ancient times, what is still to come. I say: My purpose will stand, and I will do all that I please. From the east I summon a bird of prey; from a far-off land, a man to fulfill my purpose. What I have said, that will I bring about; what I have planned, that will I do. (Isa 46:10-11)

As one who has studied Bible Prophecy and World History side by side, I can tell you that it doesn’t require much faith at all to believe the Bible. The evidence in fulfilled prophecy is just too overwhelming. But don’t take my word for this, try it for yourself. Then you’ll know why you believe, and like me, you’ll conclude that if the Lord has never lied to you yet, chances are pretty good that He never will. It’s called adding substance to your faith. It converts emotion to logic, adds knowledge to zeal, and makes your faith unshakable. Someday soon that kind of faith might well come in handy.

For as were the days of Noah, so will be the coming of the Son of Man.
False One World Beast System Religion Rising
The Deal of the Century Aftermath: What Comes Next?
Super Cool Sites To Read Or View The Bible